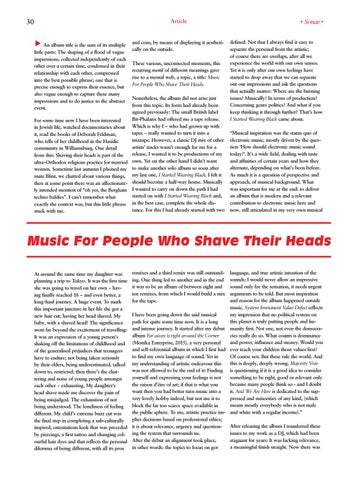 ▶ An album title is the sum of its multiple

little parts: The shaping of a flood of vague impressions, collected independently of each other over a certain time, condensed in their relationship with each other, compressed into the best possible phrase; one that is precise enough to express their essence, but also vague enough to capture these many impressions and to do justice to the abstract event.

and cons, by means of displaying it aesthetically on the outside. These various, unconnected moments, this recurring motif of different meanings gave rise to a mental web, a topic, a title: Music For People Who Shave Their Heads.

Nonetheless, the album did not arise just from this topic. Its form had already been agreed previously: The small British label Bit-Phalanx had offered me a tape release. For some time now I have been interested in Jewish life, watched documentaries about Which is why I – who had grown up with tapes – really wanted to turn it into a it, read the books of Deborah Feldman, mixtape. However, a classic DJ mix of other who tells of her childhood in the Hasidic artists’ tracks wasn’t enough for me for a community in Williamsburg. One detail release, I wanted it to be productions of my from this: Shaving their heads is part of the ultra-Orthodox religious practice for married own. Yet on the other hand I didn’t want women. Sometime last autumn I phoned my to make another solo album so soon after mate Blint, we chatted about various things, my last one, I Started Wearing Black. I felt it then at some point there was an affectionate- should become a half-way house. Musically ly intended mention of “oh yes, the Berghain I wanted to carry on down the path I had started on with I Started Wearing Black and, techno baldies”. I can’t remember what exactly the context was, but this little phrase in the best case, complete the whole distance. For this I had already started with two stuck with me.

• Sonae • defined. Not that I always find it easy to separate the personal from the artistic; of course there are overlaps, after all we experience the world with our own senses. Yet it is only after our own feelings have started to drop away that we can separate out our impressions and ask the questions that actually matter: Where are the burning issues? Musically? In terms of production? Concerning genre politics? And what if you keep thinking it through further? That’s how I Started Wearing Black came about. “Musical inspiration was the status quo of electronic music, mostly driven by the question ‘How should electronic music sound today?’. It’s a wide field, dealing with taste and affinities of certain years and how they alternate, depending on what’s been before. As much it is a question of perspective and approach, of musical background. What was important for me at the end: to deliver an album that is modern and a relevant contribution to electronic music here and now, still articulated in my very own musical

Music For People Who Shave Their Heads At around the same time my daughter was planning a trip to Tokyo. It was the first time she was going to travel on her own – having finally reached 18 – and even better, a long-haul journey. A huge event. To mark this important juncture in her life she got a new hair cut: having her head shaved. My baby, with a shaved head! The significance went far beyond the excitement of travelling: It was an expression of a young person’s shaking off the limitations of childhood and of the generalised prejudices that teenagers have to endure; not being taken seriously by their elders, being underestimated, talked down to, restricted; then there’s the chattering and noise of young people amongst each other – exhausting. My daughter’s head shave made me discover the pain of being misjudged. The exhaustion of not being understood. The loneliness of feeling different. My child’s extreme buzz cut was the final step in completing a sub-culturally inspired, ostentatious look that was preceded by piercings, a first tattoo and changing colourful hair dyes and that reflects the personal dilemma of being different, with all its pros

language, and true artistic intention of the sounds: I would never allow an impressive sound only for the sensation, it needs urgent arguments to be told. But most inspiration and reason for the album happened outside music. System Immanent Value Defect reflects my impression that no political system on I have been going down the said musical this planet is truly putting people and hupath for quite some time now. It is a long and intense journey. It started after my debut manity first. Not one, not even the democracies really do so. What counts is dominance album Far away is right around the Corner and power, influence and money. Would you (Monika Enterprise, 2015), a very personal and self-referential album in which I first had ever teach your children those values first? Of course not. But these rule the world. And to find my own language of sound. Yet in this is deeply, deeply wrong. Majority Vote my understanding of artistic endeavour this was not allowed to be the end of it: Finding is questioning if it is a good idea to consider something to be right, good or relevant only yourself and expressing your feelings is not because many people think so - and I doubt the raison d’être of art; if that is what you it. And We Are Here is dedicated to the supwant then you had better turn music into a pressed and minorities of any kind, (which very lovely hobby indeed, but not use it to means mostly everybody who is not male block the far too scarce space available in the public sphere. To me, artistic practice im- and white with a regular income).” plies decisions based on professional ethics; After releasing the album I transferred these it is about relevance, urgency and questionissues to my work as a DJ, which had been ing the system that surrounds us. stagnant for years: It was lacking relevance, After the debut an alignment took place, a meaningful finish straight. Now there was in other words: the topics to focus on got remixes and a third remix was still outstanding. One thing led to another and in the end it was to be an album of between eight and ten remixes, from which I would build a mix for the tape.