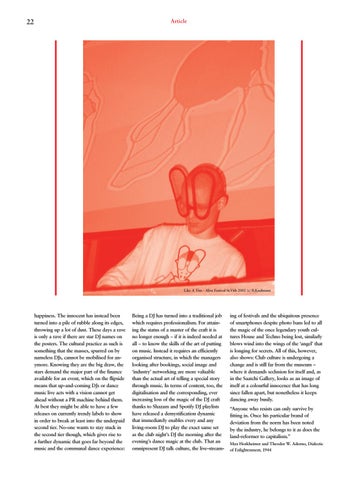 happiness. The innocent has instead been turned into a pile of rubble along its edges, throwing up a lot of dust. These days a rave is only a rave if there are star DJ names on the posters. The cultural practice as such is something that the masses, spurred on by nameless DJs, cannot be mobilised for anymore. Knowing they are the big draw, the stars demand the major part of the finance available for an event, which on the flipside means that up-and-coming DJs or dance music live acts with a vision cannot get ahead without a PR machine behind them. At best they might be able to have a few releases on currently trendy labels to show in order to break at least into the underpaid second tier. No-one wants to stay stuck in the second tier though, which gives rise to a further dynamic that goes far beyond the music and the communal dance experience:

Being a DJ has turned into a traditional job which requires professionalism. For attaining the status of a master of the craft it is no longer enough – if it is indeed needed at all – to know the skills of the art of putting on music. Instead it requires an efficiently organised structure, in which the managers looking after bookings, social image and ‘industry’ networking are more valuable than the actual art of telling a special story through music. In terms of content, too, the digitalisation and the corresponding, ever increasing loss of the magic of the DJ craft thanks to Shazam and Spotify DJ playlists have released a demystification dynamic that immediately enables every and any living-room DJ to play the exact same set as the club night’s DJ the morning after the evening’s dance magic at the club. That an omnipresent DJ talk culture, the live-stream-

ing of festivals and the ubiquitous presence of smartphones despite photo bans led to all the magic of the once legendary youth cultures House and Techno being lost, similarly blows wind into the wings of the ‘angel’ that is longing for secrets. All of this, however, also shows: Club culture is undergoing a change and is still far from the museum – where it demands seclusion for itself and, as in the Saatchi Gallery, looks as an image of itself at a colourful innocence that has long since fallen apart, but nonetheless it keeps dancing away busily. “Anyone who resists can only survive by fitting in. Once his particular brand of deviation from the norm has been noted by the industry, he belongs to it as does the land-reformer to capitalism.” Max Horkheimer and Theodor W. Adorno, Dialectic of Enlightenment, 1944