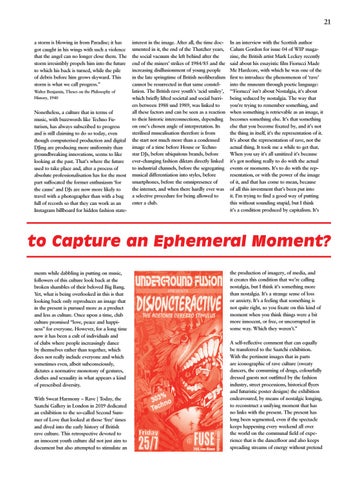 21 a storm is blowing in from Paradise; it has got caught in his wings with such a violence that the angel can no longer close them. The storm irresistibly propels him into the future to which his back is turned, while the pile of debris before him grows skyward. This storm is what we call progress.” Walter Benjamin, Theses on the Philosophy of History, 1940

Nonetheless, a culture that in terms of music, with buzzwords like Techno Futurism, has always subscribed to progress and is still claiming to do so today, even though computerised production and digital DJing are producing more uniformity than groundbreaking innovations, seems to like looking at the past. That’s where the future used to take place and, after a process of absolute professionalisation has for the most part suffocated the former enthusiasm ‘for the cause’ and DJs are now more likely to travel with a photographer than with a bag full of records so that they can work as an Instagram billboard for hidden fashion state-

interest in the image. After all, the time documented in it, the end of the Thatcher years, the social vacuum she left behind after the end of the miners’ strikes of 1984/85 and the increasing disillusionment of young people in the late springtime of British neoliberalism cannot be resurrected in that same constellation. The British rave youth’s ‘acid smiley’, which briefly lifted societal and social barriers between 1988 und 1989, was linked to all these factors and can be seen as a reaction to their historic interconnections, depending on one’s chosen angle of interpretation. Its sterilised musealisation therefore is from the start not much more than a condensed image of a time before House or Techno star DJs, before ubiquitous brands, before ever-changing fashion diktats directly linked to industrial channels, before the segregating musical differentiation into styles, before smartphones, before the omnipresence of the internet, and when there hardly ever was a selective procedure for being allowed to enter a club.

In an interview with the Scottish author Calum Gordon for issue 04 of WIP magazine, the British artist Mark Leckey recently said about his essayistic film Fiorucci Made Me Hardcore, with which he was one of the first to introduce the phenomenon of ‘rave’ into the museum through poetic language: “‘Fiorucci’ isn’t about Nostalgia, it’s about being seduced by nostalgia. The way that you’re trying to remember something, and when something is retrievable as an image, it becomes something else. It’s that something else that you become fixated by, and it’s not the thing in itself, it’s the representation of it. It’s about the representation of rave, not the actual thing. It took me a while to get that. When you say it’s all sanitized it’s because it’s got nothing really to do with the actual events or moments. It’s to do with the representation, or with the power of the image of it, and that has come to mean, because of all this investment that’s been put into it. I’m trying to find a good way of putting this without sounding stupid, but I think it’s a condition produced by capitalism. It’s

to Capture an Ephemeral Moment? ments while dabbling in putting on music, followers of this culture look back at the broken shambles of their beloved Big Bang. Yet, what is being overlooked in this is that looking back only reproduces an image that in the present is pursued more as a product and less as culture. Once upon a time, club culture promised “love, peace and happiness” for everyone. However, for a long time now it has been a cult of individuals and of clubs where people increasingly dance by themselves rather than together, which does not really include everyone and which sometimes even, albeit subconsciously, dictates a normative monotony of gestures, clothes and sexuality in what appears a kind of prescribed diversity. With Sweat Harmony – Rave | Today, the Saatchi Gallery in London in 2019 dedicated an exhibition to the so-called Second Summer of Love that looked at those ‘free’ times and dived into the early history of British rave culture. This retrospective devoted to an innocent youth culture did not just aim to document but also attempted to stimulate an

the production of imagery, of media, and it creates this condition that we’re calling nostalgia, but I think it’s something more than nostalgia. It’s a strange sense of loss or anxiety. It’s a feeling that something is not quite right, so you fixate on this kind of moment when you think things were a bit more innocent, or free, or uncorrupted in some way. Which they weren’t.” A self-reflective comment that can equally be transferred to the Saatchi exhibition. With the pertinent images that in parts are iconographic of rave culture (sweaty dancers, the consuming of drugs, colourfully dressed guests not outfitted by the fashion industry, street processions, historical flyers and futuristic poster designs) the exhibition endeavoured, by means of nostalgic longing, to reconstruct a unifying moment that has no links with the present. The present has long been segmented, even if the spectacle keeps happening every weekend all over the world on the communal field of experience that is the dancefloor and also keeps spreading streams of energy without pretend