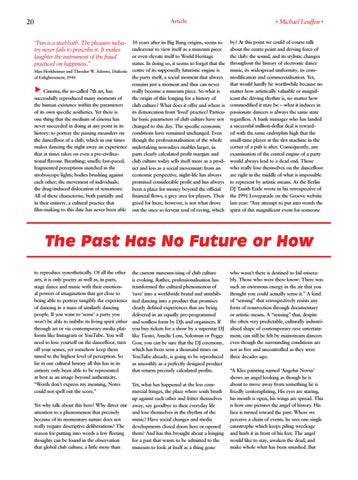 “Fun is a steel bath. The pleasure industry never fails to prescribe it. It makes laughter the instrument of the fraud practiced on happiness.”

30 years after its Big Bang origins, seems to endeavour to view itself as a museum piece or even elevate itself to World Heritage status. In doing so, it seems to forget that the Max Horkheimer and Theodor W. Adorno, Dialectic centre of its supposedly futuristic engine is of Enlightenment, 1944 the party itself, a social moment that always remains just a moment and thus can never Cinema, the so-called 7th art, has really become a museum piece. So what is successfully reproduced many moments of the origin of this longing for a history of the human existence within the parameters club culture? What does it offer and where is of its own specific aesthetics. Yet there is its demarcation from ‘lived’ practice? Particuone thing that the medium of cinema has lar basic parameters of club culture have not never succeeded in doing at any point in its changed to this day. The specific economic history: to portray the passing meanders on conditions have remained unchanged. Even the dancefloor of a club, which in our times though the professionalisation of the whole makes dancing the night away an experience undertaking nowadays enables larger, in that at times takes on even a pre-civilisaparts clearly calculated profit margins and tional flavour. Breathing; smells; fast-paced, club culture today sells itself more as a prodfragmented perceptions snatched in the uct and less as a social movement: from an stroboscope lights; bodies brushing against economic perspective, night-life has always each other; the movement of individuals; promised considerable profit and has always the drug-induced dislocation of sensations: been a place for money beyond the official All of these characterise, both partially and financial flows, a grey area for players. Their in their entirety, a cultural practice that greed for lucre, however, is not what drove film-making to this date has never been able out the once so fervent soul of raving, which

• Michael Leuffen • by? At this point we could of course talk about the centre point and driving force of the club: the sound, and its stylistic changes throughout the history of electronic dance music, its widespread uniformity, its commodification and commercialisation. Yet, that would hardly be worthwhile because no matter how artistically valuable or insignificant the driving rhythm is, no matter how commodified it may be – what it induces in passionate dancers is always the same state regardless. A bank manager who has landed a successful million-dollar deal is rewarded with the same endorphin high that the small-time player at the slot machine in the corner of a pub is after. Consequently, any examination of the central engine of a party would always lead to a dead end. Those who really lose themselves on the dancefloor are right in the middle of what is impossible to represent by artistic means. As the Berlin DJ Tanith Ende wrote in his retrospective of the 1991 Loveparade on the Groove website last year: “Any attempt to put into words the spirit of this magnificent event for someone

The Past Has No Future or How to reproduce synesthetically. Of all the other arts, it is only poetry as well as, in parts, stage dance and music with their emotional powers of imagination that get close to being able to portray tangibly the experience of dancing in a mass of similarly dancing people. If you want to ‘sense’ a party you won’t be able to imbibe its living spirit either through art or via contemporary media platforms like Instagram or YouTube. You will need to lose yourself on the dancefloor, turn off your senses, yet somehow keep them tuned to the highest level of perception. So far in our cultural history all this has in its entirety only been able to be represented at best as an image beyond authenticity. “Words don’t express my meaning, Notes could not spell out the score.”

the current museum-ising of club culture is evoking. Rather, professionalisation has transformed the cultural phenomenon of ‘rave’ into a worldwide brand and uninhibited dancing into a product that promises clearly defined experiences that are being delivered in an equally pre-programmed and soulless form by DJs and organisers. If you buy tickets for a show by a superstar DJ like Tiesto, Amelie Lens, Solomun or Peggy Gou, you can be sure that the DJ ceremony, which has been seen a thousand times on YouTube already, is going to be reproduced as smoothly as a perfectly designed product that returns precisely calculated profits.

Yet, what has happened at the less commercial fringes, the place where souls brush up against each other and fritter themselves Yet why talk about this here? Why direct our away, say goodbye to their everyday life attention to a phenomenon that precisely and lose themselves in the rhythm of the because of its momentary nature does not music? Have social changes and media really require descriptive deliberations? The developments closed doors here or opened reason for putting into words a few fleeting them? And has this brought about a longing thoughts can be found in the observation for a past that wants to be admitted to the that global club culture, a little more than museum to look at itself as a thing gone

who wasn’t there is destined to fail miserably. Those who were there know: There was such an enormous energy in the air that you thought you could actually sense it.” A kind of “sensing” that retrospectively resists any form of resurrection through documentary or artistic means. A “sensing” that, despite the often very predictable, culturally industrialised shape of contemporary rave entertainment, can still be felt by mainstream dancers even though the surrounding conditions are not as free and uncontrolled as they were three decades ago. “A Klee painting named ‘Angelus Novus’ shows an angel looking as though he is about to move away from something he is fixedly contemplating. His eyes are staring, his mouth is open, his wings are spread. This is how one pictures the angel of history. His face is turned toward the past. Where we perceive a chain of events, he sees one single catastrophe which keeps piling wreckage and hurls it in front of his feet. The angel would like to stay, awaken the dead, and make whole what has been smashed. But