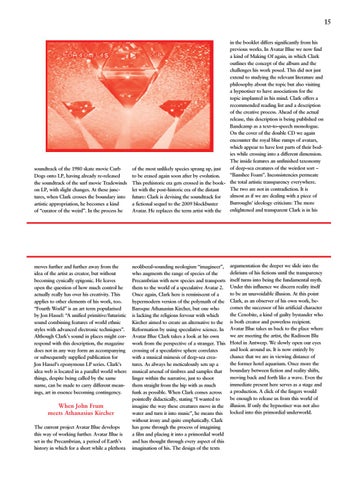 soundtrack of the 1980 skate movie Curb Dogs onto LP, having already re-released the soundtrack of the surf movie Tradewinds on LP, with slight changes. At these junctures, when Clark crosses the boundary into artistic appropriation, he becomes a kind of “curator of the weird”. In the process he

moves further and further away from the idea of the artist as creator, but without becoming cynically epigonic. He leaves open the question of how much control he actually really has over his creativity. This applies to other elements of his work, too. “Fourth World” is an art term popularised by Jon Hassel: “A unified primitive/futuristic sound combining features of world ethnic styles with advanced electronic techniques”. Although Clark’s sound in places might correspond with this description, the magazine does not in any way form an accompanying or subsequently supplied publication for Jon Hassel’s eponymous LP series. Clark’s idea web is located in a parallel world where things, despite being called by the same name, can be made to carry different meanings, art in essence becoming contingency.

When John Frum meets Athanasius Kircher The current project Avatar Blue develops this way of working further. Avatar Blue is set in the Precambrian, a period of Earth’s history in which for a short while a plethora

in the booklet differs significantly from his previous works. In Avatar Blue we now find a kind of Making Of again, in which Clark outlines the concept of the album and the challenges his work posed. This did not just extend to studying the relevant literature and philosophy about the topic but also visiting a hypnotiser to have associations for the topic implanted in his mind. Clark offers a recommended reading list and a description of the creative process. Ahead of the actual release, this description is being published on Bandcamp as a text-to-speech monologue. On the cover of the double CD we again encounter the royal blue rumps of avatars, which appear to have lost parts of their bodies while crossing into a different dimension. The inside features an unfinished taxonomy of deep-sea creatures of the weirdest sort – of the most unlikely species sprang up, just “Banshee Foam”. Inconsistencies permeate to be erased again soon after by evolution. This prehistoric era gets crossed in the book- the total artistic transparency everywhere. The two are not in contradiction. It is let with the post-historic era of the distant almost as if we are dealing with a piece of future: Clark is devising the soundtrack for Burroughs’ ideology criticism: The more a fictional sequel to the 2009 blockbuster enlightened and transparent Clark is in his Avatar. He replaces the term artist with the

neoliberal-sounding neologism “imagineer”, who augments the range of species of the Precambrian with new species and transports them to the world of a speculative Avatar 2. Once again, Clark here is reminiscent of a hypermodern version of the polymath of the Baroque Athanasius Kircher, but one who is lacking the religious fervour with which Kircher aimed to create an alternative to the Reformation by using speculative science. In Avatar Blue Clark takes a look at his own work from the perspective of a stranger. This crossing of a speculative sphere correlates with a musical mimesis of deep-sea creatures. As always he meticulously sets up a musical arsenal of timbres and samples that linger within the narrative, just to shoot them straight from the hip with as much funk as possible. When Clark comes across pointedly didactically, stating “I wanted to imagine the way these creatures move in the water and turn it into music”, he means this without irony and quite emphatically. Clark has gone through the process of imagining a film and placing it into a primordial world and has thought through every aspect of this imagination of his. The design of the texts

argumentation the deeper we slide into the delirium of his fictions until the transparency itself turns into being the fundamental myth. Under this influence we discern reality itself to be an unavoidable illusion. At this point Clark, as an observer of his own work, becomes the successor of his artificial character the Cenobite, a kind of guilty bystander who is both creator and powerless recipient. Avatar Blue takes us back to the place where we are meeting the artist, the Radisson Blu Hotel in Antwerp. We slowly open our eyes and look around us. It is now entirely by chance that we are in viewing distance of the former hotel aquarium. Once more the boundary between fiction and reality shifts, moving back and forth like a wave. Even the immediate present here serves as a stage and a production. A click of the fingers would be enough to release us from this world of illusion. If only the hypnotiser was not also locked into this primordial underworld.