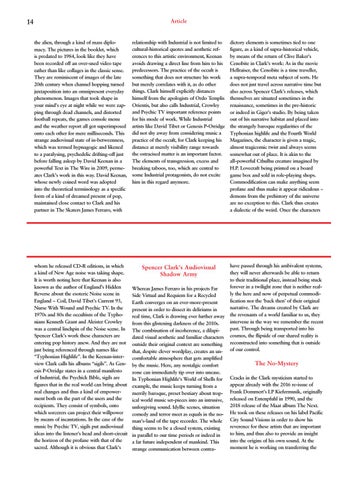 the alien, through a kind of mass diplomacy. The pictures in the booklet, which is predated to 1984, look like they have been recorded off an over-used video tape rather than like collages in the classic sense. They are reminiscent of images of the late 20th century when channel hopping turned juxtaposition into an omnipresent everyday phenomenon. Images that took shape in your mind’s eye at night while we were zapping through dead channels, and distorted football repeats, the games console menu and the weather report all got superimposed onto each other for mere milliseconds. This strange audiovisual state of in-betweenness, which was termed hypnagogic and likened to a paralysing, psychedelic drifting-off just before falling asleep by David Keenan in a powerful Text in The Wire in 2009, permeates Clark’s work in this way. David Keenan, whose newly coined word was adopted into the theoretical terminology as a specific form of a kind of dreamed present of pop, maintained close contact to Clark and his partner in The Skaters James Ferraro, with

relationship with Industrial is not limited to cultural-historical quotes and aesthetic references to this artistic environment, Keenan avoids drawing a direct line from him to his predecessors. The practice of the occult is something that does not structure his work but merely correlates with it, as do other things. Clark himself explicitly distances himself from the apologists of Ordo Templis Orientis, but also calls Industrial, Crowley and Psychic TV important reference points for his mode of work. While Industrial artists like David Tibet or Genesis P-Orridge did not shy away from considering music a practice of the occult, for Clark keeping his distance at merely visibility range towards the ostracised matter is an important factor. The elements of transgression, excess and breaking taboos, too, which are central to some Industrial protagonists, do not excite him in this regard anymore.

dictory elements is sometimes tied to one figure, as a kind of supra-historical vehicle, by means of the return of Clive Baker’s Cenobite in Clark’s work: As in the movie Hellraiser, the Cenobite is a time traveller, a supra-temporal meta subject of sorts. He does not just travel across narrative time but also across Spencer Clark’s releases, which themselves are situated sometimes in the renaissance, sometimes in the pre-historic or indeed in Giger’s studio. By being taken out of his narrative habitat and placed into the strangely baroque regularities of the Typhonian highlife and the Fourth World Magazines, the character is given a tragic, almost tragicomic twist and always seems somewhat out of place. It is akin to the all-powerful Cthulhu creature imagined by H.P. Lovecraft being printed on a board game box and sold in role-playing shops. Commodification can make anything seem profane and thus make it appear ridiculous – demons from the prehistory of the universe are no exception to this. Clark thus creates a dialectic of the weird. Once the characters

whom he released CD-R editions, in which a kind of New Age noise was taking shape. It is worth noting here that Keenan is also known as the author of England’s Hidden Reverse about the esoteric Noise scene in England – Coil, David Tibet’s Current 93, Nurse With Wound and Psychic TV. In the 1970s and 80s the occultism of the Typhonians Kenneth Grant and Aleister Crowley was a central linchpin of the Noise scene. In Spencer Clark’s work these characters are entering pop history anew. And they are not just being referenced through names like “Typhonian Highlife”. In the Keenan-interview Clark calls his albums “sigils”. As Genesis P-Orridge states in a central manifesto of Industrial, the Psychick Bible, sigils are figures that in the real world can bring about real changes and thus a kind of empowerment both on the part of the users and the recipients. They consist of symbols, onto which sorcerers can project their willpower by means of incantations. In the case of the music by Psychic TV, sigils put audiovisual ideas into the listener’s head and short-circuit the horizon of the profane with that of the sacred. Although it is obvious that Clark’s

have passed through his ambivalent systems, they will never afterwards be able to return to their traditional place, instead being stuck forever in a twilight zone that is neither really the here and now of perpetual commodification nor the ‘back then’ of their original narrative. The dreams created by Clark are the revenants of a world familiar to us, they intervene in the way we remember the recent past. Through being transported into his cosmos, the flipside of our shared reality is reconstructed into something that is outside of our control.

Whereas James Ferraro in his projects Far Side Virtual and Requiem for a Recycled Earth converges on an ever-more-present present in order to dissect its deliriums in real time, Clark is drawing ever further away from this glistening darkness of the 2010s. The combination of incoherence, a dilapidated visual aesthetic and familiar characters outside their original context are something that, despite clever wordplay, creates an uncomfortable atmosphere that gets amplified by the music. Here, any nostalgic comfort zone can immediately tip over into unease. In Typhonian Highlife’s World of Shells for example, the music keeps turning from a merrily baroque, preset bestiary about tropical world music set-pieces into an intrusive, unforgiving sound. Idyllic scenes, situation comedy and terror meet as equals in the noman’s-land of the tape recorder. The whole thing seems to be a closed system, existing in parallel to our time periods or indeed in a far future independent of mankind. This strange communication between contra-

The No-Mystery Cracks in the Clark mysticism started to appear already with the 2016 re-issue of Frank Dommert’s LP Kiefermusik, originally released on Entenpfuhl in 1990, and the 2018 release of the Maat album The Next. He took on these releases on his label Pacific City Sound Visions in order to show his reverence for these artists that are important to him, and thus also to provide an insight into the origins of his own sound. At the moment he is working on transferring the