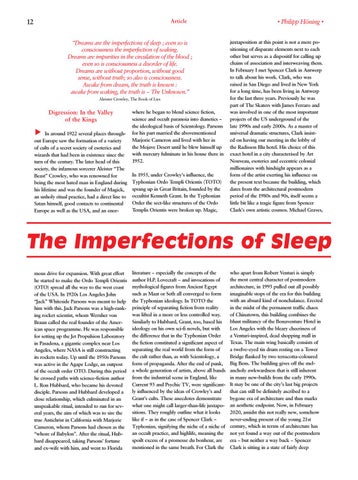 Digression: In the Valley of the Kings

In around 1922 several places throughout Europe saw the formation of a variety of cults of a secret society of esoterics and wizards that had been in existence since the turn of the century. The later head of this society, the infamous sorcerer Aleister “The Beast” Crowley, who was renowned for being the most hated man in England during his lifetime and was the founder of Magick, an unholy ritual practice, had a direct line to Satan himself, good contacts to continental Europe as well as the USA, and an enor-

where he began to blend science fiction, science and occult paranoia into dianetics – the ideological basis of Scientology. Parsons for his part married the abovementioned Marjorie Cameron and lived with her in the Mojave Desert until he blew himself up with mercury fulminate in his house there in 1952. In 1955, under Crowley’s influence, the Typhonian Ordo Templi Orientis (TOTO) sprang up in Great Britain, founded by the occultist Kenneth Grant. In the Typhonian Order the sect-like structures of the Ordo Templis Orientis were broken up. Magic,

• Philipp Höning • juxtaposition at this point is not a mere positioning of disparate elements next to each other but serves as a dispositif for calling up chains of association and interweaving them. In February I met Spencer Clark in Antwerp to talk about his work. Clark, who was raised in San Diego and lived in New York for a long time, has been living in Antwerp for the last three years. Previously he was part of The Skaters with James Ferraro and was involved in one of the most important projects of the US underground of the late 1990s and early 2000s. As a master of universal dramatic structures, Clark insisted on having our meeting in the lobby of the Radisson Blu hotel. His choice of this exact hotel in a city characterised by Art Nouveau, esoterics and eccentric colonial millionaires with hindsight appears as a form of the artist exerting his influence on the present text because the building, which dates from the architectural postmodern period of the 1980s and 90s, itself seems a little bit like a tragic figure from Spencer Clark’s own artistic cosmos. Michael Graves,

The Imperfections of Sleep mous drive for expansion. With great effort he started to make the Ordo Templi Orientis (OTO) spread all the way to the west coast of the USA. In 1920s Los Angeles John “Jack” Whiteside Parsons was meant to help him with this. Jack Parsons was a high-ranking rocket scientist, whom Wernher von Braun called the real founder of the American space programme. He was responsible for setting up the Jet Propulsion Laboratory in Pasadena, a gigantic complex near Los Angeles, where NASA is still constructing its rockets today. Up until the 1950s Parsons was active in the Agape Lodge, an outpost of the occult order OTO. During this period he crossed paths with science-fiction author L. Ron Hubbard, who became his devoted disciple. Parsons and Hubbard developed a close relationship, which culminated in an unspeakable ritual, intended to run for several years, the aim of which was to sire the true Antichrist in California with Marjorie Cameron, whom Parsons had chosen as the “whore of Babylon”. After the ritual, Hubbard disappeared, taking Parsons’ fortune and ex-wife with him, and went to Florida

literature – especially the concepts of the author H.P. Lovecraft – and invocations of mythological figures from Ancient Egypt such as Maat or Seth all converged to form the Typhonian ideology. In TOTO the principle of separating fiction from reality was lifted in a more or less controlled way. Similarly to Hubbard, Grant, too, based his ideology on his own sci-fi novels, but with the difference that in the Typhonian Order the fiction constituted a significant aspect of separating the real world from the form of the cult rather than, as with Scientology, a form of propaganda. After the end of punk, a whole generation of artists, above all bands from the industrial scene in England, like Current 93 and Psychic TV, were significantly influenced by the ideas of Crowley’s and Grant’s cults. These anecdotes demonstrate what one might call larger-than-life juxtapositions. They roughly outline what it looks like if – as in the case of Spencer Clark – Typhonian, signifying the niche of a niche of an occult practice, and highlife, meaning the spoilt excess of a promesse du bonheur, are mentioned in the same breath. For Clark the

who apart from Robert Venturi is simply the most central character of postmodern architecture, in 1993 pulled out all possibly imaginable stops of the era for this building with an absurd kind of nonchalance. Erected in the midst of the permanent traffic chaos of Chinatown, this building combines the blunt militancy of the Bonaventure Hotel in Los Angeles with the bleary cheeriness of a Venturi-inspired, dead shopping mall in Texas. The main wing basically consists of a twelve-eyed tin drum resting on a Tower Bridge flanked by two terracotta-coloured Big Bens. The building gives off the melancholy awkwardness that is still inherent in many new-builds from the early 1990s. It may be one of the city’s last big projects that can still be definitely ascribed to a bygone era of architecture and thus marks an aesthetic endpoint. Now, in February 2020, amidst this not really new, somehow never-ending present of the young 21st century, which in terms of architecture has not yet found a way out of the postmodern era – but neither a way back – Spencer Clark is sitting in a state of fairly deep