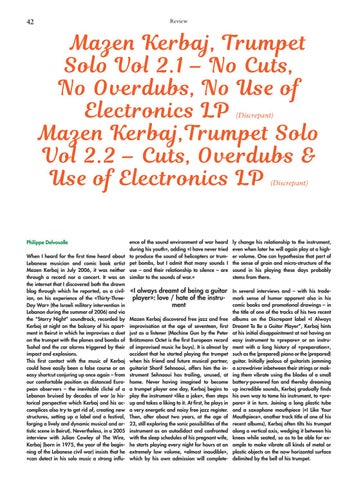 Philippe Delvosalle When I heard for the first time heard about Lebanese musician and comic book artist Mazen Kerbaj in July 2006, it was neither through a record nor a concert. It was on the internet that I discovered both the drawn blog through which he reported, as a civilian, on his experience of the «Thirty-ThreeDay War» (the Israeli military intervention in Lebanon during the summer of 2006) and via the “Starry Night” soundtrack, recorded by Kerbaj at night on the balcony of his apartment in Beirut in which he improvises a duet on the trumpet with the planes and bombs of Tsahal and the car alarms triggered by their impact and explosions. This first contact with the music of Kerbaj could have easily been a false course or an easy shortcut conjuring up once again – from our comfortable position as distanced European observers – the inevitable cliché of a Lebanon bruised by decades of war (a historical perspective which Kerbaj and his accomplices also try to get rid of, creating new structures, setting up a label and a festival, forging a lively and dynamic musical and artistic scene in Beirut). Nevertheless, in a 2005 interview with Julian Cowley of The Wire, Kerbaj (born in 1975, the year of the beginning of the Lebanese civil war) insists that he «can detect in his solo music a strong influ-

ence of the sound environment of war heard during his youth», adding «I have never tried to produce the sound of helicopters or trumpet bombs, but I admit that many sounds I use – and their relationship to silence – are similar to the sounds of war.»

ly change his relationship to the instrument, even when later he will again play at a higher volume. One can hypothesize that part of the sense of grain and micro-structure of the sound in his playing these days probably stems from there.

«I always dreamt of being a guitar player»: love / hate of the instrument

In several interviews and – with his trademark sense of humor apparent also in his comic books and promotional drawings – in the title of one of the tracks of his two recent albums on the Discrepant label «I Always Dreamt To Be a Guitar Player”, Kerbaj hints at his initial disappointment at not having an easy instrument to «prepare» or an instrument with a long history of «preparation», such as the (prepared) piano or the (prepared) guitar. Initially jealous of guitarists jamming a screwdriver inbetween their strings or making them vibrate using the blades of a small battery-powered fan and thereby dreaming up incredible sounds, Kerbaj gradually finds his own way to tame his instrument, to «prepare» it in turn. Joining a long plastic tube and a saxophone mouthpiece («I Like Your Mouthpiece», another track title of one of his recent albums), Kerbaj often tilts his trumpet along a vertical axis, wedging it between his knees while seated, so as to be able for example to make vibrate all kinds of metal or plastic objects on the now horizontal surface delimited by the bell of his trumpet.

Mazen Kerbaj discovered free jazz and free improvisation at the age of seventeen, first just as a listener (Machine Gun by the Peter Brötzmann Octet is the first European record of improvised music he buys). It is almost by accident that he started playing the trumpet when his friend and future musical partner, guitarist Sharif Sehnaoui, offers him the instrument Sehnaoui has trailing, unused, at home. Never having imagined to become a trumpet player one day, Kerbaj begins to play the instrument «like a joke», then steps up and takes a liking to it. At first, he plays in a very energetic and noisy free jazz register. Then, after about two years, at the age of 23, still exploring the sonic possibilities of the instrument as an autodidact and confronted with the sleep schedules of his pregnant wife, he starts playing every night for hours at an extremely low volume, «almost inaudible», which by his own admission will complete-