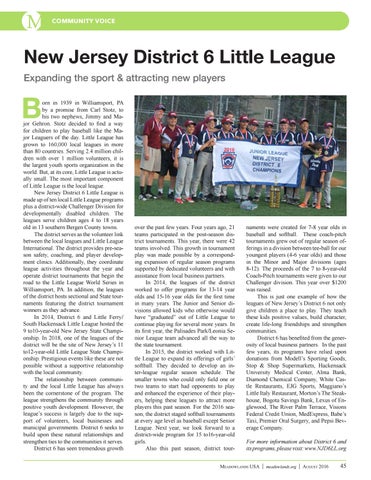 orn in 1939 in Williamsport, PA by a promise from Carl Stotz, to his two nephews, Jimmy and Major Gehron. Stotz decided to find a way for children to play baseball like the Major Leaguers of the day. Little League has grown to 160,000 local leagues in more than 80 countries. Serving 2.4 million children with over 1 million volunteers, it is the largest youth sports organization in the world. But, at its core, Little League is actually small. The most important component of Little League is the local league. New Jersey District 6 Little League is made up of ten local Little League programs plus a district-wide Challenger Division for developmentally disabled children. The leagues serve children ages 4 to 18 years old in 13 southern Bergen County towns. The district serves as the volunteer link between the local leagues and Little League International. The district provides pre-season safety, coaching, and player development clinics. Additionally, they coordinate league activities throughout the year and operate district tournaments that begin the road to the Little League World Series in Williamsport, PA. In addition, the leagues of the district hosts sectional and State tournaments featuring the district tournament winners as they advance. In 2014, District 6 and Little Ferry/ South Hackensack Little League hosted the 9 to10-year-old New Jersey State Championship. In 2018, one of the leagues of the district will be the site of New Jersey’s 11 to12-year-old Little League State Championship. Prestigious events like these are not possible without a supportive relationship with the local community. The relationship between community and the local Little League has always been the cornerstone of the program. The league strengthens the community through positive youth development. However, the league’s success is largely due to the support of volunteers, local businesses and municipal governments. District 6 seeks to build upon these natural relationships and strengthen ties to the communities it serves. District 6 has seen tremendous growth

over the past few years. Four years ago, 21 teams participated in the post-season district tournaments. This year, there were 42 teams involved. This growth in tournament play was made possible by a corresponding expansion of regular season programs supported by dedicated volunteers and with assistance from local business partners. In 2014, the leagues of the district worked to offer programs for 13-14 year olds and 15-16 year olds for the first time in many years. The Junior and Senior divisions allowed kids who otherwise would have “graduated” out of Little League to continue playing for several more years. In its first year, the Palisades Park/Leonia Senior League team advanced all the way to the state tournament. In 2015, the district worked with Little League to expand its offerings of girls’ softball. They decided to develop an inter-league regular season schedule. The smaller towns who could only field one or two teams to start had opponents to play and enhanced the experience of their players, helping these leagues to attract more players this past season. For the 2016 season, the district staged softball tournaments at every age level as baseball except Senior League. Next year, we look forward to a district-wide program for 15 to16-year-old girls. Also this past season, district tour-

naments were created for 7-8 year olds in baseball and softball. These coach-pitch tournaments grew out of regular season offerings in a division between tee-ball for our youngest players (4-6 year olds) and those in the Minor and Major divisions (ages 8-12). The proceeds of the 7 to 8-year-old Coach-Pitch tournaments were given to our Challenger division. This year over $1200 was raised. This is just one example of how the leagues of New Jersey’s District 6 not only give children a place to play. They teach these kids positive values, build character, create life-long friendships and strengthen communities. District 6 has benefited from the generosity of local business partners. In the past few years, its programs have relied upon donations from Modell’s Sporting Goods, Stop & Shop Supermarkets, Hackensack University Medical Center, Alma Bank, Diamond Chemical Company, White Castle Restaurants, EJG Sports, Maggiano’s Little Italy Restaurant, Morton’s The Steakhouse, Bogota Savings Bank, Lexus of Englewood, The River Palm Terrace, Visions Federal Credit Union, MedExpress, Babe’s Taxi, Premier Oral Surgery, and Pepsi Beverage Company. For more information about District 6 and its programs, please visit: www.NJD6LL.org 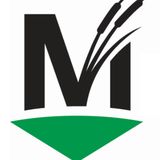