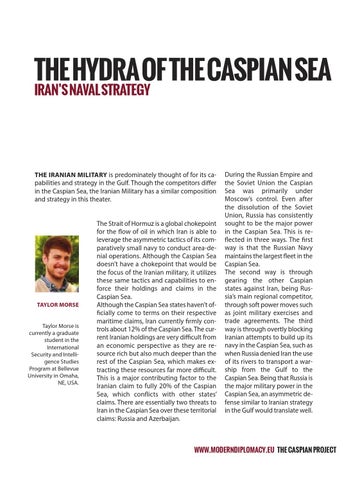 tHe HyDra Of tHe CasPIan sea Iran’s naval strategy

The IranIan MIlITary is predominately thought of for its capabilities and strategy in the Gulf. Though the competitors diﬀer in the Caspian Sea, the Iranian Military has a similar composition and strategy in this theater.

Taylor Morse is currently a graduate student in the International Security and Intelligence Studies Program at Bellevue University in Omaha, NE, USA.

The Strait of Hormuz is a global chokepoint for the flow of oil in which Iran is able to leverage the asymmetric tactics of its comparatively small navy to conduct area-denial operations. Although the Caspian Sea doesn’t have a chokepoint that would be the focus of the Iranian military, it utilizes these same tactics and capabilities to enforce their holdings and claims in the Caspian Sea. Although the Caspian Sea states haven’t officially come to terms on their respective maritime claims, Iran currently firmly controls about 12% of the Caspian Sea. The current Iranian holdings are very diﬃcult from an economic perspective as they are resource rich but also much deeper than the rest of the Caspian Sea, which makes extracting these resources far more diﬃcult. This is a major contributing factor to the Iranian claim to fully 20% of the Caspian Sea, which conflicts with other states’ claims. There are essentially two threats to Iran in the Caspian Sea over these territorial claims: Russia and Azerbaijan. 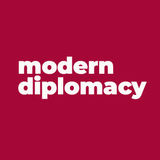