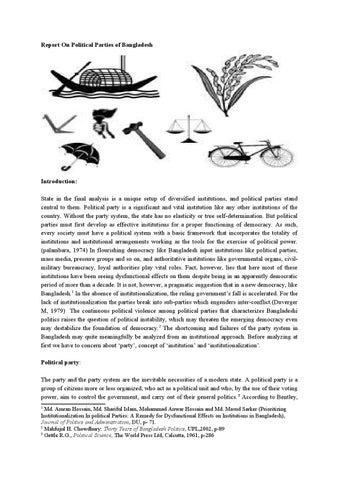 Report On Political Parties of Bangladesh

Introduction: State in the final analysis is a unique setup of diversified institutions, and political parties stand central to them. Political party is a significant and vital institution like any other institutions of the country. Without the party system, the state has no elasticity or true self-determination. But political parties must first develop as effective institutions for a proper functioning of democracy. As such, every society must have a political system with a basic framework that incorporates the totality of institutions and institutional arrangements working as the tools for the exercise of political power. (palambara, 1974) In flourishing democracy like Bangladesh input institutions like political parties, mass media, pressure groups and so on, and authoritative institutions like governmental organs, civilmilitary bureaucracy, loyal authorities play vital roles. Fact, however, lies that here most of these institutions have been seeing dysfunctional effects on them despite being in an apparently democratic period of more than a decade. It is not, however, a pragmatic suggestion that in a new democracy, like Bangladesh.1 In the absence of institutionalization, the ruling government’s fall is accelerated. For the lack of institutionalization the parties break into sub-parties which engenders inter-conflict.(Duverger M, 1979) The continuous political violence among political parties that characterizes Bangladeshi politics raises the question of political instability, which may threaten the emerging democracy even may destabilize the foundation of democracy. 2 The shortcoming and failures of the party system in Bangladesh may quite meaningfully be analyzed from an institutional approach. Before analyzing at first we have to concern about ‘party’, concept of ‘institution’ and ‘institutionalization’. Political party: The party and the party system are the inevitable necessities of a modern state. A political party is a group of citizens more or less organized, who act as a political unit and who, by the use of their voting power, aim to control the government, and carry out of their general politics. 3 According to Bentley, 1

“the governmental process is the interaction of contending groups.” 4 Similarly, Schumpeter says- “A party is a group whose members propose to act in the competitive struggle for political power.” 5 In fact, the concerted groups are not only to preserve the interest of their own but also the fate of all classes of people depends on them. 6 Therefore, the group should have reflection of socialization and institutionalization.7 Actually parties are the vehicles for recruiting political leaders, structuring people’s choices and formulating policies. A necessary element of a strong party system is that the parties be institutionalized (Dix, 1994; Huntington,1991; Mainwaring,1992; Mainwaring and Scully 1995). Needless to say that the political parties of Bangladesh do not possess the above mentioned characteristics. Political parties are not involved in politics merely in the gross sense of it. Though Bangladesh is abundant in natural resources and man power, the country cannot achieve modernization and development because of proper institutionalization of political parties. (Rahaman M, 1973) The formation of the government and the opposition is the inevitable necessity in democracy based on institutionalization. As a political institution the failure of ruling party can be explained in term of its lack of institutionalization. The fall of Awami League (AL), Jatiya Party (JP), and Bangladesh Nationalist Party (BNP), respectively in 1975,1990 and 1996 are the brilliant examples. Therefore, to ensure democratic process and political stability in Bangladesh, the need for institutionalization of political parties cannot be over-emphasized. 8 Conceptualizing Institutions: For many social scientists institutions are organizations, which embody, foster and protect normative relationship and action patterns and perform functions and services which are valued in the social environment (Blaise 1969). Roger Scruton talks about four important features of institution. (D. Bellin Allan Bullock) Firstly, institution contains members but they are not identical with any member. Secondly, institutions have “independent” agency, and some times personality. “Institutions might have “right and obligations that do not belong to any member. Thirdly, institutions may endure beyond the life of any particular member and its history is different from the history of its members. Fourthly, institutions manifest their members. Roger Scruton remarks that institutions may or may not have a constitution; they may or may not have rules, laws and conventions; they may or may not be automous. (D. Bellin Allan Bullock) The value of institution depends on the institutionalization of it. A simple political community may have a purely ethnic, religious, or occupational base and will have little need for highly developed political institutions. In a complex society community is produced by political action and maintained by political institutions. Historically, political institutions have emerged out of the interaction among and disagreement among social forces, and the gradual development of procedures and organizational devices for resolving those disagreements.

Adaptability: The degree of adaptability endorses and institution how institutionalized it is. It refers to the function of the governmental challenge and age. The more challenges that have arisen in its environment and the greater its age, the more adaptable it is. (Huntington, 1968) Success in adapting to one environmental challenge paves the way for successful adaptation to subsequent environmental challenges. (Huntington, 1968) Chronological Existence: Longer existence persuades the level of institutionalization of an organization. The older an organization is, the more likely it is to continue to exist through

and orderly and institutionalized competition for power. An institutionalized party has a routine election calendar and consistent election rules, which govern the winners and losers. According to Huntington there are mainly four indicators to measure for party institutionalization are- adaptability, complexity, autonomy and coherence. On the other hand, Mainwaring and scully (1992) suggest that party institutionalization be measured by the rules of inter-party competition, the development of social support for parties, and emphasis on elections as the means for selecting rulers and internal organization of parties. Another indicator I would like to add to measure party institutionalization is the level of violence among the parties.11 Lack of Institutionalization of party system in Bangladesh may be summed up in the following wayRigidity: Rigidity in the party makes it far from the demand of the time. AL BNP, or JP could not adapt to the peoples demand in different instances, which led them to the subsequent failures and ultimately abdication. The rigidity of AL (1972-75) took shape in the formation of BAKSAL, Rokhyi Bahinee and secularization of the constitution mainly because these were not adaptable to the contemporary time. The rigidity of BNP regarding the caretaker government was one of the vital causes of its fall. Jatiya Party did not pay heed to the people demand regarding a free and fair election. Infact, the less adaptable and more rigid a party is the lower its level of institutionalization. Simplicity of formation: The simplest political system is that which depends on one individual. Aristotle pointed out Tyrannies are virtually all â&#x20AC;&#x153;quite short livedâ&#x20AC;? 97 Political parties of Bangladesh do not have sufficient subunit for the welfare of the people at the grassroots level; rather they are busy to implement the single-man order. Sub-ordination: While the parties remain subordinate to any external or internal forces the institutionalization in it is mere a utopian dream. Political parties of Bangladesh are captive to a number of loan defaulters, smugglers and other internal social forces. Political institutors are always vulnerable to non-political influences. On the other hand, the more foreign sanctions are received, the more the government is subordination to the donor authorities. Disunity: The grater the disunity of the organization, the less it is institutionalized. AL, BNP and JP have more or less the experience to be vulnerable to inter conflicts.

Lack of democratization and socialization: Democracy is the life of an organization except which gradual success of any organization is beyond expectation. Direct democracy is under which the people rule themselves by themselves with not medication, deputation or representation. Political activities proceed through the socialization of the parties. In this instance, ideology, value faith the honesty, unity and above all morality of the political parties contribute a lot. It in fact, exits hardly in our political system. Lack of consensus: In any burning question facing the nation, the inter party or intra-party consensus is not available. The issue of caretaker government led to the continuous non-co-operation movement which obstructed the on-going development of the country and tarnished the glory of the nation to the international community. Hereditary control of Power: There exists a disguised arbitrary government in Bangladesh in the form of democracy. Hereditary control of power is the common feature of this sub continent. So the parties do not possess institutionalization, Dynastic rule continues in Bangladesh even to-day. Leadership Crisis: Itâ&#x20AC;&#x2122;s the common problem faced by all political parties in todayâ&#x20AC;&#x2122;s context. Such stable and ideal leadership as can overcome the narrow party-interest has not evolved in this country. Jatiya Party created ignoble example of abandonment. Ershad was portrayed by tine opposition and media as a corrupt person with a great weakness for money and woman. Her made no attempt to restrain himself from these habits which he had pressed even before he assumed power. Besides, AL has failed miserably in the post independence period to lead the national. Sheikh Mujib created a country which he could not govern due to lack of statesmanship and creative leadership. Corruption, nepotism and partisan: Limitless corruption, partisanship and nepotism have led the country to an uncertain future. The parties, therefore, cannot achieve sustainable support of the people. All successive governments formed in Bangladesh offered undue privileges and financial benefits to their party supporters and party activists. Most of the activities, then default in repaying loans and interests. 12 Md. Amran Hossain, (Problems of Institutionalization of Political Parties In Bangladesh: An Overview): Social Science Review, Vol .XIV,No.2 (1997),p-186-188

miniature political system, and it has an authority structure. On the other hand, modern political scientists have identified political parties as leading agent of modernization. A political party or groups of parties ultimately govern the state. Institutional9izaiton is the precondition to political stability. Already it has been mentioned that political development and stability of a country also correlated with the party system and the n nature of political parties in the country. Since the emergence of political parties of Bangladesh no initiative was taken to acquire institionalizaiton. The immediate goal of the major political parties in Bangladesh is to capture political power by disregarding democratic norms or values. This involves the parties in inter-p[arty the state and society. With the exercise of this process, no party can win the hearts of the people. So no government here is stable. In the political arena of Bangladesh today’s urgent need is to flourish democratic value. To sustain in power, the parties have no alternative except being institutionalized. Hence a political party needs to cultivate reciprocal tolerance, consensus on national issues mutual respect and accommodation for making democracy work and strengthening democratic political institutions. So, what is needed in Bangldesh by borrowing the ideals of Dewey (1927) we can say is the improvement of the methods and conditions of debate, discussion and persuasion? Report on political parties of bangladesh

State in the final analysis is a unique setup of diversified institutions, and political parties stand central to them. Political party is a...

Report on political parties of bangladesh

State in the final analysis is a unique setup of diversified institutions, and political parties stand central to them. Political party is a...