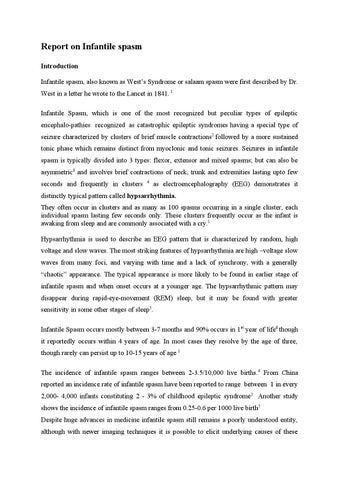 Report on Infantile spasm Introduction Infantile spasm, also known as West’s Syndrome or salaam spasm were first described by Dr. West in a letter he wrote to the Lancet in 1841. 1 Infantile Spasm, which is one of the most recognized but peculiar types of epileptic encephalo-pathies recognized as catastrophic epileptic syndromes having a special type of seizure characterized by clusters of brief muscle contractions2 followed by a more sustained tonic phase which remains distinct from myoclonic and tonic seizures. Seizures in infantile spasm is typically divided into 3 types: flexor, extensor and mixed spasms; but can also be asymmetric3 and involves brief contractions of neck, trunk and extremities lasting upto few seconds and frequently in clusters

as electroencephalography (EEG) demonstrates it

distinctly typical pattern called hypsarrhythmia. They often occur in clusters and as many as 100 spasms occurring in a single cluster, each individual spasm lasting few seconds only. These clusters frequently occur as the infant is awaking from sleep and are commonly associated with a cry.1 Hypsarrhythmia is used to describe an EEG pattern that is characterized by random, high voltage and slow waves. The most striking features of hypsarrhythmia are high –voltage slow waves from many foci, and varying with time and a lack of synchrony, with a generally “chaotic” appearance. The typical appearance is more likely to be found in earlier stage of infantile spasm and when onset occurs at a younger age. The hypsarrhythmic pattern may disappear during rapid-eye-movement (REM) sleep, but it may be found with greater sensitivity in some other stages of sleep5. Infantile Spasm occurs mostly between 3-7 months and 90% occurs in 1 st year of life6 though it reportedly occurs within 4 years of age. In most cases they resolve by the age of three, though rarely can persist up to 10-15 years of age 1 The incidence of infantile spasm ranges between 2-3.5/10,000 live births.4 From China reported an incidence rate of infantile spasm have been reported to range between 1 in every 2,000- 4,000 infants constituting 2 - 3% of childhood epileptic syndrome 2 .Another study shows the incidence of infantile spasm ranges from 0.25-0.6 per 1000 live birth7 Despite huge advances in medicine infantile spasm still remains a poorly understood entity, although with newer imaging techniques it is possible to elicit underlying causes of these

handicaps.5 Etiological classifications of infantile spasm include: (i)

Cryptogenic (no underlying cause and had normal development prior to onset of spasms).

Causes of infantile spasm may be prenatal, perinatal and postnatal. The percentage of symptomatic infantile spasm has increased due to improved diagnostic techniques such as metabolic and genetic testing and neuroemaging.4 There is an association with a number of disorders –some of which are known at disease on set (e.g. cerebral palsy, Down’s syndrome etc.), whilst other are discovered on investigation after the onset of spasm (e.g. tuberous sclerosis, neuronal migration disorder etc). However, in a significant minority of cases the etiologies remain unknown. 1 Outcome of infantile spasm dependent on etiology and may be more favourable in cryptogenic infantile spasm. Delay in diagnosis is common and negatively influenced final seizure outcome.8 Outcome assesses by cessation of spasms, quantitative reduction of spasms, and resolution of EEG abnormality. Among the many pharmacological agents tried for management of infantile spasm, ACTH, oral corticosteroids and vigabatrin have yielded the most significantly favorable results.9 Second-line drugs include B6, nitrazepam, valporic acid, leviteracetam, zonisamide, and topiramate. (Where ACTH or Vigabatrin has failed) 10 Common side effect of ACTH and prednisolone: Irritability, acne, weight gain, increased appetite, “moon face”, hypertension, hyperglycemia, gastrointestinal bleeding. ACTH may often cause anaphylaxis, hypertension, and growth retardation. Vigabatrin causes irreversible

peripheral severe visual handicaps.5 it is generally accepted that the adverse effect of ACTH are primarily dose dependent.11 ACTH act directly inhibiting corticotrophin releasing hormone (CRH) secretion and it also has negative feedback effect on CRH secretion by increasing blood steroid level.2 In the United States, many physicians perceive ACTH as first-line therapy, as this was the only treatment in the 2004 American Academy of Neurology practice parameter classified as â&amp;#x20AC;&amp;#x153;probablyâ&amp;#x20AC;? effective.12 Efficacy of ACTH for resolution of clinical spasms has varied from as low as 33% to as high as 100%, with relapse rates of 8-50%. Resolution of hypsarrhythmia on with ACTH also varied with rates as low as 21% and as high as 100%. On reviewing some randomized controlled trials (RCT) and crossover studies, to evaluate the efficacy and safety of high-dose and low-dose ACTH

evidencing a trend towards more

complete cessation of spasm in low-dose ACTH group and no difference in disappearance of hypsarrhythmia between high and low-dose ACTH but high-dose ACTH produced more adverse effects then lower concluding that low-dose ACTH might be preferable for its comparative efficacy and lower risk of adverse effects.2 Two large surveys were performed independently by United States Consensous and Japan to determine the drug of choice for infantile spasm treatment. ACTH, as initial therapy is used in~88% patients in USA most frequently at a dose of 40IU/day for 1-2months, irrespective to etiology.3 United states consensus reported that in a study patients were given 10mg prednisolone 4 times/day for 2wks or, 20mg prednisolone 3 times/day after 1 wk if spasm continued. Thus 70% (21/300) patients with prednisolone had a good clinical response .4 Since Sept 2007, they replaced ACTH with high -dose oral prednisolone (40-60mg/day) according to 2004 United Kingdom infantile spasms study (UKISS). They now routinely recommend oral prednisolone to all families of children with infantile spasms. Recently, high-dose prednisolone treatment produced high clinical efficacy for infantile spasm cessation using 40mg oral prednisolone/day for 2 weeks.5

From 1958-2002, 24 studies of case reports were examined where they observed that ATCH &amp; prednisolone was the most common agent used.4 In Pakistan experienced the efficacy of ACTH was marginally better than prednisolone 33% in ACTH and 24% in prednisolone group of infantile spasm children remained spasm free. ACTH and prednisone both are used, when response being defined as either complete cessation or &gt;=50% reduction in the spasm frequency as judged by the parents6 Though ACTH is used more selectively in Europe in comparison to prednisolone whereas ~88% of pediatric neurologists in United States use ACTH as the first choice. 6 initially, it was thought that prednisolone was as effective as ACTH. More recently, it has been shown that ACTH is superior to 2 mg/kg/day prednisone and high dose is no better than low-dose ACTH.

RATIONALE And ideal treatment of infantile spasm still remains unclear, but many study advocate hormonal treatment. In some studies ACTH was superior to prednisolone,

Study will be conducted in pediatric neurology unit of

The required sample size is calculated by WinPepi = 54. Considering 10% refusal/attrition the study will require a total of 54x0.1+54 = 59.4 .To take equal numbers the study will consider this as 60 meaning each group will need 30. (B)Using Formula: â&amp;#x20AC;˘

zβ= area under the curve corresponding to power of the study to detect the true alternative hypothesis (0.84 for 80% power)

Assuming 95% confident level and 80% power we know that,

Considering 10% refusal/attrition the study will require a total of (25x2)x0.1+50 = 55 To take equal numbers the study will consider this as 56 meaning each group will need 28.

Inclusion criteria: 1. Clinical symtomatology of infantile spasm as elicited by through physical examination and detailed history. 2. Accompanying EEG findings at initial EEG. 3. Child’s guardian/attendant who would agree (in written) that their children may take part in the study

Exclusion criteria: 1. All children who were diagnosed to have tuberous sclerosis. 2. Children who had already received any of the investigational drugs prior to their first encounter were also excluded. 3. Childâ&amp;#x20AC;&amp;#x2122;s guardian/attendant who would not agree to consent on their children may take part in the study 4. The child who would present any other serious illness or co-morbidities 5. Methods: All the infantile spasm patients seeking treatment in department of pediatrics, Dhaka medical college hospital and BSMMU will be the reference population. Detailed history and clinical examination of all infantile spasm patients will be done. From reference population patients fulfilling the selection criteria will be enrolled consecutively as study population. Necessary exclusion will be done. After taking written informed consent and randomization, drugs will be given according to dose schedule. During the continuation of drugs patients will be followed up by principal investigator and will be recorded in follow up sheet. Randomization:

Route: Oral as liquid suspension (5mg/5ml) Dose: 40-60mg/day three divided doses for 2 weeks. 20mg/day two divided doses for 1 week 10mg/day once daily for 1 week Data collection and analysis: Data will be collected by a preformed questionnaire. Data analysis will be done using computer software SPSS (Win version 17).Mean, median, standard deviation will be determined. For comparing the descriptive value Z-test will be used. For comparing the continuous variables chi-square test will be used. A p-value of &lt;0.05(at95% CI) will be considered significant. Flow Chart: Work Organization: Suitable population will be selected From Reference Population Necessary Exclusion will be done

Those not eligible Those who will Not give consent

Sample size will be 60 Randomization

Ethical Considerations: All proper steps to fulfill the ethical considerations will be sought from Research review committee, department of pediatrics and Ethical review committee of Dhaka Medical College time based on the following ethical grounds:

Informed written consent from the parents/attendant will be taken prior to include the child in the study after detailing the aims &amp; objectives of the study and its implication on the child and overall in pediatric science in Bangladesh and in the world. The parents will be informed on the anonymity of the study child and to ensure the parents of not publishing the data or any report of the child anywhere except for scientific presentations or publications (with anonymity). BIBLIOGRAPHY 1.

Tallie Z. Baram. What are the reasons for the strikingly different approaches to the use of ACTH in infants with wast syndrome. Brain &amp; Development 23 (2001) 647648.

Infantile spasm, also known as West’s Syndrome or salaam spasm were first described by Dr. West in a letter he wrote to the Lancet in 1841. 1