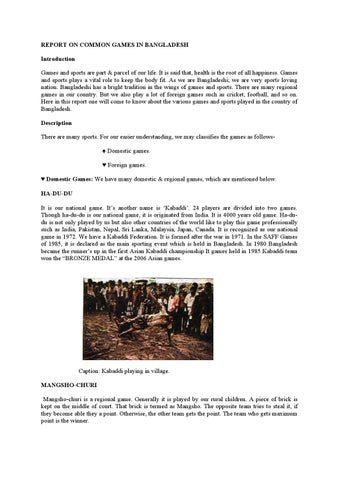 REPORT ON COMMON GAMES IN BANGLADESH Introduction Games and sports are part & parcel of our life. It is said that, health is the root of all happiness. Games and sports plays a vital role to keep the body fit. As we are Bangladeshi; we are very sports loving nation. Bangladeshi has a bright tradition in the wings of games and sports. There are many regional games in our country. But we also play a lot of foreign games such as cricket, football, and so on. Here in this report one will come to know about the various games and sports played in the country of Bangladesh. Description There are many sports. For our easier understanding, we may classifies the games as follows♠ Domestic games. ♥ Foreign games. ♥ Domestic Games: We have many domestic & regional games, which are mentioned below. HA-DU-DU It is our national game. It’s another name is ‘Kabaddi’. 24 players are divided into two games. Though ha-du-du is our national game, it is originated from India. It is 4000 years old game. Ha-dudu is not only played by us but also other countries of the world like to play this game professionally such as India, Pakistan, Nepal, Sri Lanka, Malaysia, Japan, Canada. It is recognized as our national game in 1972. We have a Kabaddi Federation. It is formed after the war in 1971. In the SAFF Games of 1985, it is declared as the main sporting event which is held in Bangladesh. In 1980 Bangladesh became the runner’s up in the first Asian Kabaddi championship It games held in 1985 Kabaddi team won the “BRONZE MEDAL” at the 2006 Asian games.

Caption: Kabaddi playing in village. MANGSHO-CHURI Mangsho-churi is a regional game. Generally it is played by our rural children. A piece of brick is kept on the middle of court. That brick is termed as Mangsho. The opposite team tries to steal it, if they become able they a point. Otherwise, the other team gets the point. The team who gets maximum point is the winner.

GULTI Normally gulti is a game of hunting birds by the villager boys. It is not seen in the urban area. It is also played as a target practice game. The instrument of this game is wood, rubber-tire, and marble (made of mud). 7 to 15 years aged boys are like to play this game. While playing this game they get boundless enjoyment.

Caption: Go for the target. DUNG GULIE Dung-guli is another regional game played by the boys. It is played in the open field. 12 to 15 inched stick and 2 to 2.5 inched guli is needed to play this game. Stick is taken from the tree branches. The shape of guli made like a pencil. This game is played using more than one player. This game may be of 2 types – ‘Goran & Gotpil’. The players try to send the guli as far as possible by hitting it hard with the stick. Who sent the guli to the largest distance; he is declared to be the winner. Sometimes anyone may get inured due to the hit of guli. Though, they play it with lot of enjoyment and courage.

Caption: On the action KITE FLYING Kite flying is not only popular in Bangladesh, but also in China, Japan, India and some other countries of Asia. It is very interesting game. We try to cut down the kite of others which is called “Katakuti” or “patch”. One needs thread, kite and a cylinder to fly the kite. ‘Manja’, a special kind of thread is made by the player himself. Kite flying is a festive occasion. It is called “Shang-kranti”. It is a tradition to the people of old town. Every people from children to older person became a child, while flying a kite.

Caption: Fly in the sky.

KUT-KUT Girls one of the favorite game is kut kut. Normally girls of school and college play this game. Though, it seems to be very easy, this game is not easy at all. To play this game a small piece of brick and a court is needed. It is a tough game to play because the player has to say ‘kut kut’ non-stop; without taking breathe and have to chase each court one after one using one leg. Still we see village girls playing this game.

Caption: Tough Job LATIM Latim is another popular game of children. Normally two types of latim is found – 1. Made of wood & 2. Made of plastic. Latim is made by automatic machine. It is thrown with a special kind of rope called ‘Letti’. Everyone tries to spin their one; whose latim spins for more time declared to be the winner.

Caption: Spins boundlessly LUDU Ludu is a board game played in our country. Almost people of every country like to play this game. To start this game one has to score “chakka”. There is a destination point of every player. At least 2 players are necessary to play this game. The player who is able to reach the winning point at first is the winner and therefore second, third and fourth. Most often children and women used to play this game.

Caption: They are busy! PUTUL-BIYE Once upon a time it is very much popular to the girls of village. Actually this is played by the girls at the childhood, when they donâ&#x20AC;&#x2122;t know what marriage is! But they gave marriages of their dolls. Village living girls play this game and it is their favorite game. Our mother, grand mother and elder sister helps us to make doll. Little girl gets a soft pleasure while playing this game. They create full family of doll. It was very interesting indeed. Still now village girl play this game.

Caption: Marriage of doll. SAATCHARA Saatchara is a famous game which is played in every part of Bangladesh. A tennis ball and seven small pieces of brick are needed for this game. Two teams divided into equal players play this game. The team which gets maximum points is the winner of the game. It is a very interesting game. In most of the cases, we find this game playing in the rural area.

MARBLE It is a game of low privileged boys. This practice is mainly seen in a village or in a slum. While playing this game they forget about the time. When it becomes evening they stop playing and go to home. For being late, they get punishment from their parents, though they don’t stop playing this game. Because it is like a addiction. In local words, it is also said ‘Guti’.

Caption; Get set go SKIPPING Skipping is not only a game,but also a physical exercise. Most often girls used to play this game. A rope is used to jump over it continuously. The winner situation depends on how many times they have skipped over the rope. Thus, first, second and third is determined. Though it is a game of girls, many elder people take this as a physical exercise. It is a very compete ting game.

Caption: Don’t loose control. ICHING-BICHING It is like a game of athletics i.e. high jump. The player who is good in high jump can do well in this sporting event. Two people sit on the field and create height by hand. Two players who can’t chase the height, sits to make height. Thus the games is played,

GULLA-CHUT Golla-chut is a popular and attractive game to both boys and girls of village. Two teams divided into equal players to play this game. The team which starts playing at the first selects a â&#x20AC;&#x153;kingâ&#x20AC;? from them. If the team of king able to reach in their destination without the touch of the opposite side, they will be the winner. This game is played in the region of Dhaka, Faridpur, Madaripur, Barisal, Khulna, and Jessore. FOREIGN GAMES Foreign Games Foreign games like cricket, football are very much popular in our country. Along with these games we also play tennis, volleyball, handball, badminton basketball etc. CRICKET Cricket is now most popular games in the world. The rules and regulation of cricket playing is maintained by ICC. There are several versions of cricket -Test match, ODI and new invention twenty20. There are 10 test playing nation South Africa, Australia, India, Sri Lanka, England, Pakistan, New Zealand, West Indies, Bangladesh, and Zimbabwe, Kenya and other countries also play ODI. Twenty20 format have given a new dimension such as IPL, ICL in India. The quality of our domestic cricket is not so developed. Though we won against many giant teams like Australia, South Africa, Sri Lanka, India, and Pakistan, our performance is not is too much consistent. We are in 9th position in ICC test and ODI ranking. Although cricket is a foreign game, we are cricket loving nation.

Caption: We can fight & win.

FOOTBALL Football came from Great Britain. Football is one of the best games in the world. After, every four years world cup held in different country. Now Italy is the champion of world cup. It will be held in South Africa in 2010. In the race of FIFA ranking, Bangladesh is in 172nd position. Now days it is not too much popular in our country, though a new committee trying to save the football of our country. They have declared to make a football academy for the development of football. Girls are also started to play football in the school from 2008.

Caption: Girls are in action. HANDBALL At first handball playing started in Germany in 1890. In 1982 international organization was formed. In 1964 handball introduced as an Asian Games. Bangladesh started to play handball in 6 th June, 1982. Though we are playing handball since 1982, it is not too much popular in our country. In school level, there ere girls and boys team in our country but we have no recognition internationally. BADMINTON We do not have any international recognition in playing this game. But we have a badminton federation. Though, we are not doing well in this game. Most often young people of our country play this game at winter night. It can be played as a single game or as a double player. The winning point is considered15, but the new point is 21. Somebody maintain this rules, somebody not.Because, satisfaction is main thing of playing this game in winter.

Caption: Badminton playing at night. KHO-KHO As far we know, playing of Kho-Kho started in the region of West India. It is quite popular in Gujarat, Madhya Pradesh and Maharastra. In 1976, a diploma course is started in N.S.I.S. centre of Bangaluru.

Every year we sent players for training. Now we have many experienced coach. Under them our team has done some brilliant performance in international area. If we take necessary steps we can maintain our regular performance. CHESS Bangladesh has started to emerge as a growing chess nation. Bangladesh has three international Grand Masters and many international Fide Masters. Niaz Murshed was the first GM from Bangladesh while Ziaur Rahman recently obtained his third GM norm to become the second GM from Bangladesh. Reefat Bin Sattar became the country’s third GM in 2005. In the competition of world chess 2008, we have done a brilliant performance. Report on common games in bangladesh

Report on common games in bangladesh