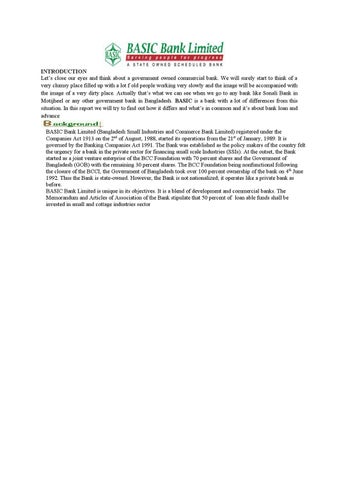 INTRODUCTION Let’s close our eyes and think about a government owned commercial bank. We will surely start to think of a very clumsy place filled up with a lot f old people working very slowly and the image will be accompanied with the image of a very dirty place. Actually that’s what we can see when we go to any bank like Sonali Bank in Motijheel or any other government bank in Bangladesh. BASIC is a bank with a lot of differences from this situation. In this report we will try to find out how it differs and what’s in common and it’s about bank loan and advance BASIC Bank Limited (Bangladesh Small Industries and Commerce Bank Limited) registered under the Companies Act 1913 on the 2nd of August, 1988, started its operations from the 21st of January, 1989. It is governed by the Banking Companies Act 1991. The Bank was established as the policy makers of the country felt the urgency for a bank in the private sector for financing small scale Industries (SSIs). At the outset, the Bank started as a joint venture enterprise of the BCC Foundation with 70 percent shares and the Government of Bangladesh (GOB) with the remaining 30 percent shares. The BCC Foundation being nonfunctional following the closure of the BCCI, the Government of Bangladesh took over 100 percent ownership of the bank on 4th June 1992. Thus the Bank is state-owned. However, the Bank is not nationalized; it operates like a private bank as before. BASIC Bank Limited is unique in its objectives. It is a blend of development and commercial banks. The Memorandum and Articles of Association of the Bank stipulate that 50 percent of loan able funds shall be invested in small and cottage industries sector

Data on Corporate Strategy The Bank Offers: a. Term loans to industries especially to small-scale enterprises. b. Full-fledged commercial banking service including collection of deposit, short term trade finance, working capital finance in processing and manufacturing units and financing and facilitating international trade. c. Technical support to Small Scale Industries (SSls) in order to enable them to run their enterprises successfully. d. Micro credit to the urban poor through linkage with Non- Government Organizations (NGOs) with a view to facilitating their access to the formal financial market for the mobilization of resources. In order to perform the above tasks, BASIC Bank works closely with its clients, the regulatory authorities, the shareholders (GOB), banks and other financial institutions.

Let’s close our eyes and think about a government owned commercial bank. We will surely start to think of a very clumsy place filled up with a lot f old people working very slowly and the image will be accompanied with the image of a very dirty place.