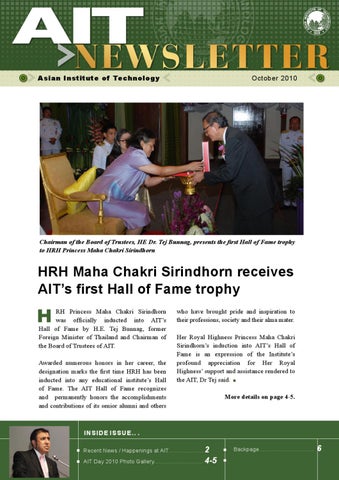 Chairman of the Board of Trustees, HE Dr. Tej Bunnag, presents the first Hall of Fame trophy to HRH Princess Maha Chakri Sirindhorn

RH Princess Maha Chakri Sirindhorn was officially inducted into AIT’s Hall of Fame by H.E. Tej Bunnag, former Foreign Minister of Thailand and Chairman of the Board of Trustees of AIT. Awarded numerous honors in her career, the designation marks the first time HRH has been inducted into any educational institute’s Hall of Fame. The AIT Hall of Fame recognizes and permanently honors the accomplishments and contributions of its senior alumni and others

who have brought pride and inspiration to their professions, society and their alma mater. Her Royal Highness Princess Maha Chakri Sirindhorn’s induction into AIT’s Hall of Fame is an expression of the Institute’s profound appreciation for Her Royal Highness’ support and assistance rendered to the AIT, Dr Tej said. More details on page 4-5.

Nigeria’s NSUK seeks collaboration with AIT Nasawara State University (NSUK) of Nigeria has expressed interest in student, faculty and staff exchange programs with the Asian Institute of Technology (AIT). This was stated by the Vice Chancellor of NSUK, Prof. Shamsudeen O.O.Amali during a visit to AIT on 20 September 2010. Prof. Amali stated that NSUK was impressed with AIT and was keen on training and enhancing its pool of experts. “We are short of experts and would like AIT to train our staff,”

Prof. Amali said. The Vice Chancellor remarked that NSUK would like to establish linkages in both student and staff exchange, apart from training programs. The linkage could also be extended to material and research exchange, he added. Prof. J.O.E.Otuka, Deputy Vice Chancellor of NSUK elaborated on the academic offerings of his university. The delegation included Prof. Ebele Amali, Professor of Economics at NSUK and Fatima Othman, Director of Linkages, NSUK. Prof. Elebe Amali is one of the only five female professors of Economics in Nigeria.

This was stated by the Ambassador during his maiden visit to AIT on 14 September 2010. Apart from meeting senior AIT officials, the Ambassador also visited the ASEAN Regional Center of Excellence on MDGs, Yunus Center at AIT, AIT Consulting, Energy Park and the Center of Excellence in Nanotechnology. The ambassador was accompanied by Mr. Ilan Weitzman, First Secretary, and Deputy Chief of Mission.

We will act as ambassadors of AIT: Ethiopian Minister “The Asian Institute of Technology focuses on appropriate technology and we have benefitted a lot from this institute. We will act as ambassadors of AIT and send more students, visitors and officials for training.” This was stated by H.E. Dr. Abera Deressa, State Minister, Ministry of Agriculture and Rural Development (MoARD), Ethiopia while speaking at the closing ceremony of Professional

Development Program on “Sustainable Development in Rural and Agricultural Practices using IT Applications” organized by AIT Extension on 1 September 2010. The Minister, who along with eight senior officials from Ethiopia attended the program, remarked that their study objective has been attained and that AIT provided them with practical examples of using technology in rural development and agriculture. Complimenting AIT for hosting and organizing the program, the minister stated that the AIT focus on appropriate technology for developing countries has proved to be very beneficial for the participants.

Recent News / happenings at AIT  interview with the Nation Channel for the program “Inside Asia.”

Asian Institute Technology in Vietnam (AITVN) unveils new office in Can Tho Asian Institute of Technology in Vietnam (AITVN) unveiled the new AIT-Vietnam office and classroom facilities located on the campus of the Can Tho University (CTU) on 10 September 2010. Speaking on the occasion, the AIT President Prof. Said Irandoust remarked that the event is a testimony of 17 years of strong and sustained partnership between the Government of Vietnam and the Asian Institute of Technology (AIT). AIT and CTU also signed an agreement to facilitate efficient delivery of joint programs in education, research and other services for the region.

“Asian Institute of Technology is gearing towards an even brighter future after the signing of the new AIT Charter. With representatives across three continents becoming signatories of the new AIT Charter, the institute positions itself as not just a regional hub, but as a global network institute.” This was stated by the AIT President Prof. Said Irandoust during a television

During the half hour interview anchored by senior journalist Mr. Kavi Chongkittavorn of the Nation Multimedia Group, the President elaborated on the benefits of the new AIT Charter. Prof. Irandoust remarked that the new Charter is a mandate for fostering and promoting a global network. The President also added that Africa is an important area for AIT and the experience from Asia can be applied to Africa. He cited the example of Seychelles joining the new AIT Charter as a testimony to AIT’s association with Africa. Prof. Irandoust also spoke about AIT’s involvement in capacity building in Afghanistan, Iraq and North Korea.

AIT signs agreement with Skydoor Students from the Asian Institute of Technology (AIT) are among the best and each student is different from the other in terms of knowledge, experience and skills. These were the remarks of Dr. Roberto Mariani, CEO and Founder of Skydoor Pte Limited during the signing ceremony of a Memorandum of Understanding (MOU) between Skydoor and AIT. Dr. Mariani remarked that AIT was one of the three global educational institutions where he had found such student diversity. Mr. Kenneth S. Brown, Managing Director and Chairman of Skydoor Pte Limited stated that this was the first instance of his company partnering with an educational institute. Skydoor signed a MOU with AIT wherein the two partners with help create the Skydoor environment to be used by Universities and other institutes of higher learning to enhance skills in computer and digital imaging environments. The two partners will also promote creativity in computer and digital imaging and drive developing nations towards a knowledge based economy.

On the Asian Institute of Technology’s (AIT) 51st anniversary celebration, a three-day celebration was organized to bring all alumni, former faculty members and friends of AIT. Her Royal Highness Princess Maha Chakri Sirindhorn of Thailand became the first ever inductee into AIT’s new Hall Of Fame on 7 September 2010 at a glittering AIT Day 2010 ceremony. Accepting the honor, HRH Princess Maha Chakri Sirindhorn remarked that she was “honored and flattered to accept the invitation of the panel of judges, chaired by former AIT

President Prof. Alastair North, to be the first Hall of Fame inductee at the Asian Institute of Technology. The beloved Thai Princess headed a stellar group of eleven Thai and international AIT alumni as Hall of Fame inductees from Thailand, Pakistan, Chinese Taipei, Indonesia and the Philippines. The official launch of the Friends of AIT Heritage (FAITH) Foundation also took place during the celebration. Her Royal Highness Princess Maha Chakri Sirindhorn encouraged all alumni to support the AIT Fundraising Campaign.

Over 70 participants including AIT alumni, former faculty, current AIT faculty and staff participated in a brainstorming session on AIT’s future.

Multicultural welcome show at AIT draws packed house A full packed house at the AIT Conference Center enjoyed the multi cultural welcome show organized for new students. Students from India, Thailand and Cambodia bagged the top honors in the various competitions organized by the AIT Student Union (AITSU) to mark the occasion. The cultural extravaganza witnessed participation of students from Asia, Europe and Africa. An interesting display was a joint ‘international’ performance by students of various countries. Many participants included songs and music from other countries while presenting their performance, illustrating the multi cultural character of AIT. Students from India won the top honors in both song and dance competitions, while students from Thailand won the drama contest. The team from Cambodia bagged the Ms. and Mr. AIT contest. The international group won the second prize in the song competition, while students from Myanmar won the third prize. In the dance competition, the team from Myanmar was the second runner up, while the team from Thailand finished as the first runner up.

Just after the release of the new Times Higher Education (THE) Rankings, the European Union too is developing a new worldwide ranking system of universities to rival currently established league tables in a bid to improve the ranking of European universities and improve Europe’s economic power. Read more in an article in the EU Observer.

So far 113 graduation ceremonies have been held at AIT

The much debated new methodology on THE rankings can be read here.

October 2010 edition of the monthly Newsletter of the Asian Institute of Technology (AIT). For feedback, contact Media and Communications U...

October 2010 edition of the monthly Newsletter of the Asian Institute of Technology (AIT). For feedback, contact Media and Communications U...