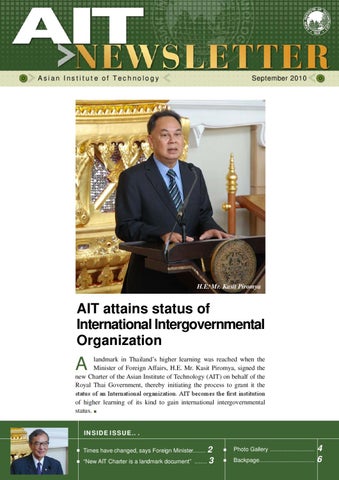 landmark in Thailand’s higher learning was reached when the Minister of Foreign Affairs, H.E. Mr. Kasit Piromya, signed the new Charter of the Asian Institute of Technology (AIT) on behalf of the Royal Thai Government, thereby initiating the process to grant it the status of an International organization. AIT becomes the first institution of higher learning of its kind to gain international intergovernmental status.

Times have changed, and AIT needs to change as well: Thai Foreign Minister The foreign minister remarked that “from the beginning AIT took on an international, independent and non-political character and has actively sought partners in Asia and beyond. Times have changed, and AIT needs to change as well.” We realized some time ago that, for AIT to further prosper and continue to contribute to our economic growth, it has to be able to operate effectively, with the flexibility to search for and cooperate with new partners and stakeholders, and with a reach that has to be not only regional but also global, the Minister added. Prof. Said Irandoust (left) greets H.E. Mr. Kasit Piromya (right). H.E. Mr. Kasit Piromya, Foreign Minister of Thailand described AIT as a center of excellence in research and knowledge in Southeast Asia. The Foreign Minister stated this during the adoption and signing ceremony of the New AIT Charter on 25 August 2010.

While announcing that the Royal Thai Government fully endorses the new AIT Charter, he stated that AIT continues to contribute to the region’s dynamism and prosperity. “AIT’s role will be even more important as our growing economy is ever more reliant on our capacity to harness knowledge and creativity,” the Minister added.

New AIT Charter is a landmark document: Dr Tej Bunnag The new Charter of the Asian Institute of Technology (AIT) is a landmark document and it renews the long trusted partnership that exists between the Institute and its stakeholders, respective governments and international organizations. This was stated by H.E. Dr. Tej Bunnag, former Foreign Minister of Thailand and Chairman, Board of Trustees of AIT, during the adoption and signing ceremony of the new AIT Charter at the Vites Samosorn Room in the Ministry of Foreign Affairs of Thailand. Dr. Tej Bunnag stated that the new AIT Charter is a highly significant development in the five-decade long history of AIT. It marks another stage in the fulfillment of the dream of AIT’s founding fathers. “This intergovernmental Charter is the product of a very laborious and challenging process, but also very constructive, process of consultations and negotiations between the participating bodies over the past four years or so,” Dr. Tej remarked.

Galaxy of delegates, invitees and guests at the Vites Samosorn Room, Ministry of Foreign Affairs of Thailand during the adoption and signing ceremony of the new AIT Charter.

Galaxy of dignitaries at the signing ceremony of the new AIT Charter.

HRH graces AIT booth at Science Fair Her Royal Highness Princess Maha Chakri Sirindhorn visited the booth set up by the Asian Institute of Technology (AIT) on 11 August 2010 at the Science and Technology Fair organized at the BiTech Bang-Na Conference Center. After inaugurating the fair, Her Royal Highness visited the AIT Booth where Prof. Athapol Noonhom, Coordinator, Food Engineering and Bioprocess Technology Field of Study, presented various research projects undertaken by the School of Environment, Resources and Development (SERD) and the School of Engineering and Technology (SET). HRH Princess Maha Chakri Sirindhorn will be the inaugural inductee into AIT’s Hall of Fame on AIT Day on 7 September 2010.

France reaffirms commitment to sign new AIT Charter during Ambassador’s maiden visit Ambassador of France to Thailand H.E. Gildas Le Lidec, during his maiden visit to the Asian Institute of Technology (AIT) reaffirmed the commitment of France to sign the new AIT Charter. The Ambassador, while interacting with the AIT senior management, stated that the French version of the new AIT Charter will have to be endorsed and once this requirement is met, France would also become a signatory. Prof. Said Irandoust, AIT President while welcoming the Ambassador expressed the importance to have France becoming a signatory under the new AIT Charter, considering that France has been an active member since the foundation of AIT in 1959. He also briefed the French Ambassador and the delegation about the new funding model currently being explored by AIT which will help AIT scale up its operations.

PEOPLE Dr. Sandro Calvani has joined as Director of the ASEAN Regional Centre of Excellence on Millennium Development Goals (ARCMDG) at AIT from 01 September 2010. Aside from his main responsibility as the Director of the ASEAN Regional Center of Excellence of MDGs, Dr. Calvani will also be assisting the AIT Yunus Center, CSR Asia Center at AIT, fundraising efforts of AIT; and in AIT’s regional expansion plans through the conduct of pilot studies of priority countries as part of the examination of a new funding model for AIT being conducted, under the auspices and overall direction of the AIT Executive Committee and Board of Trustees.

AIT is more than a university

Asian Institute of Technology (AIT) is not just a university, but a place where students learn, discuss and debate in an international environment. AIT is more than a university as it helps a student to network and grow as an individual. This was stated by the AIT President Prof. Said Irandoust, while welcoming new students the occasion of AIT Orientation on 11 August 2010. The AIT President remarked that diversity was a crucial element in AIT, and that the institute is very proud of its internationality. Apart from education and higher learning, AIT is actively involved in training and capacity building in post conflict societies. “This way AIT makes a difference to the life of millions of people all across the world,” Prof. Irandoust remarked. He asked students to challenge their professors and take on proven truths. “Those who are creative and innovative will be winners in the future,” Prof. Irandoust added.

School of Management at AIT offers a course on “Oil-less Economy”.

Rent a book With rising costs of education, some universities are now including a book rental option. Universities and bookstores are now offering books on a read and return basis for a fixed fee. Says “Sign on SanDiego” A full-time college student spends an average of $500 on textbooks at the start of each semester but if the textbook rental market catches on, that price could fall by at least $100. Bookstores at San Diego State University, University of San Diego and UC San Diego have expanded their inventory to include books students rent and return instead of buy and sell at the end of the semester. Book rental is nothing new though. Online bookstores have been offering such services for a few years now. Read more at http://www.signonsandiego.com/news/2010/aug/28/universities-offer-rental-book-option/ http://www.panamericanonline.com/arts-life/rent-a-text-to-provide-possible-financial-relief-for-students1.2310934

September 2010 edition of the monthly Newsletter of the Asian Institute of Technology (AIT). For feedback, contact Media and Communications...

September 2010 edition of the monthly Newsletter of the Asian Institute of Technology (AIT). For feedback, contact Media and Communications...