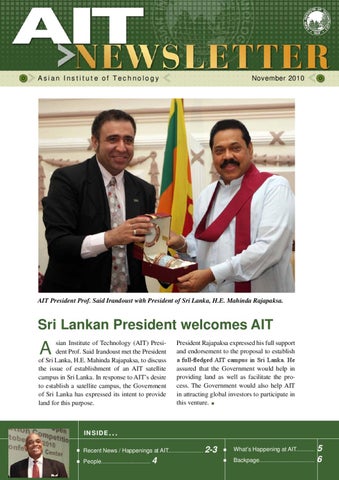 sian Institute of Technology (AIT) Presi- dent Prof. Said Irandoust met the President of Sri Lanka, H.E. Mahinda Rajapaksa, to discuss the issue of establishment of an AIT satellite campus in Sri Lanka. In response to AITâ&#x20AC;&#x2122;s desire to establish a satellite campus, the Government of Sri Lanka has expressed its intent to provide land for this purpose.

President Rajapaksa expressed his full support and endorsement to the proposal to establish a full-fledged AIT campus in Sri Lanka. He assured that the Government would help in providing land as well as facilitate the process. The Government would also help AIT in attracting global investors to participate in this venture.

Ambassador Lacanlale remarked that the possibility of establishing an AIT satellite campus in her country “holds promise” and she invited the AIT President to explore the idea further with the embassy. “We can work with you to make AIT better known in the Phillipines,” Ambassador Lacanlale told President Irandoust.

AIT’s output is absolutely brilliant: Dr Junaid Ahmad AIT has a great learning environment and its output, especially in terms of its alumni, is “absolutely brilliant”. These were the remarks of Dr. Junaid Ahmad, Chairman, National Management Consultants, during an interaction at AIT on 4 October 2010. Dr. Ahmad remarked that AIT should capitalize on its resources, since it has created a strong brand equity and name during the past five decades.

Prof. Joydeep Dutta, Vice President for Academic Affairs, while welcoming Dr. Ahmad stated the vision of AIT is to be “The University of Asia” during the next 10 years. The institute has very strong linkages all over the region, particularly with Pakistan, and it would like to further build on these linkages. “AIT stresses on internationality with an Asian orientation,” Prof. Dutta remarked while adding that the signing of the new AIT Charter is a landmark step which would help strengthen AIT’s global network of partners.

CAB looks for greater partnership with AIT College of Agriculture and Banking (India) is looking towards greater participation and interaction in programs at AIT. This was stated by Mr. R. R. Kulkarni, Deputy General Manager, CAB, during the International exposure on Micro, Small and Medium Enterprise (MSMSE) Financing organized by AIT Extension. He revealed that CAB had already sent two cohorts of participants to AIT, and the current batch of participants formed the third group. “We look towards more active participation between the two institutes,” he added.

AIT is a premier institute: Thai Senator on energy was very glad to visit AIT and it was very impressed with the institute. “Thousands of graduates from AIT have contributed immensely in the development of the country for the past four to five decades and we thank AIT for this contribution,” he said.

Asian Institute of Technology (AIT) is a premier institute of engineering and higher education and in its 50 years, it has contributed immensely to the development of many regions in the region. These were the remarks of Chairperson of the Standing Committee on Energy of the Thailand Senate, General Lertrat Ratanavanich, at AIT on 27 October 2010. Gen. Ratanavanich remarked that the Standing Committee

He also suggested that AIT should quickly embark on a project on flood prevention and control since the disaster seems to be looming large in Thailand. “I would propose that AIT initiates a project to prevent flood in Thailand since the North, Northeastern and Central parts of Thailand are badly affected,” the General said. AIT’s expertise in Early Warning Systems and disaster management can contribute towards this project, he added.

NSF interested in AIT Dr. Joseph Mook, National Science Foundation (NSF) Program Manager based in Washington D.C. for Thailand, Brunei, Cambodia, Indonesia, Laos, Malaysia, Myanmar, and Philippines, paid a fact-finding and information-sharing visit to AIT on 26 October 2010. He was accompanied by Mrs. Selma Garrido, U.S. Department of State, Embassy of the United States of America, Bangkok, who facilitated the meeting. “There’s no question that AIT is a world-class institution which NSF is interested in collaborating with. I’m hoping to encourage international collaborators to participate in

AITAA GBM held at Hanoi The 39th Governing Body Meeting of the AIT Alumni Association was held at Hanoi in Vietnam on 23-24 October. AIT alumnus Dr. Bui Cach Tuyen, Deputy Minister, National Resources and Environment, Vietnam delivered the keynote address. AIT President Said Irandoust stated that since Asia and the world has changed dramatically, AIT must also be agile, flexible, responsive and entrepreneurial in all its activities.

IT played a pivotal role at the recent 2010 AsiaPacific Climate Change Adaptation Forum (Forum 2010), which was convened at the United Nations Conference Centre in Bangkok on October 21-22.

Organized by the Regional Climate Change Knowledge Platform for Asia (Adaptation Knowledge Platform) and the Asia Pacific Adaptation Network (Adaptation Network), the event brought together more than 500 participants from across the Asia-Pacific region. AIT President Prof. Said Irandoust served as a moderator in one of the key thematic discussions on “Role of Science in Adaptive Development”. Prof. Sudip K. Rakshit, Vice President for Research, served as a panelist and shared his thoughts on uncertainility in vulnerability assessment. Ms. Leena Wokeck, Director, CSR Center at AIT was a panelist at the session titled “Financing Adaptation and Aid Effectiveness”. AIT Center of Excellence on Sustainable Development in the Context of Climate Change (SDCC) had a significant presence at the Forum. The Adaptation Knowledge Platform has been jointly established by the Asian Institute of Technology - United Nations Environment Programme Regional Resource Centre for Asia and the Pacific (AIT - UNEP RRC.AP); Stockholm Environment Institute (SEI); Swedish Environmental Secretariat for Asia (SENSA) and UNEP, with funding support from the Swedish International Development Cooperation Agency (Sida).

wo students from Asian Institute of Technology (AIT) are among the team of four volunteers of Télécoms Sans Frontières (TSF) who have rushed to Indonesia following the earthquake and tsunami in Mentawai Islands in Western Sumatra. The deployment is in

response to the request of the Office of the President of Indonesia. The two students are Mr. Clinton Smith of Disaster Preparedness, Mitigation and Management (DPMM) program in AIT’s School of Environment, Resources and Development (SERD) and Ms. Albane Coeurquetin of Information and Communication Technology (ICT) of School of Engineering and Technology (SET). The TSF team is led by Mr. Oisin Walton, Delegate for Asia-Pacific. TSF is a partner of AIT and its Asia-Pacific headquarters are based at AIT.

Mr. Amila Abeynayaka, a research associate at the School of Environment, Resources and Development (SERD) of AIT, has won the “Award for Asian Young Professional on Water Research.” He was awarded at the Eighth International Symposium on Southeast Asian Water Environment held at Phuket, Thailand from October 24-26, 2010.

Open minds and presentation skills Apart from Prof. Said Irandoust, President, AIT, the judges included Mr. Raymond Brandes, Program Spedazzle AIT With an open mind and under the watchful eyes of a galaxy of expert judges, students of AIT showcased their presentation skills at the second AIT Open Presentation Competition organized on 26 October 2010. “Team GDS” comprising of Mehwish Qudoos, Ria Parmana Sari, Nafisa Rashid and Dimdaline Sar was the winner in the School of Environment, Resources and Development (SERD), while from School of Engineering and Technology (SET), the team “AsOne” comprising of Muhammad Haris Aziz, Nancy Sykora, Warisa Wisittipanich, Chayakarm Bamrungbutr and Saowanit Lekhavat came first. The competition reached a crescendo when “Three Jewels” from School of Management (SOM) comprising of Cherry Than, Olga Olegovna Shipina and Subodh Bahadur Pradhanang, emerged winners in their school.

Scenes from the Open Presentation Competition NSF interested in AIT

The Mini Olympics organized by the Student Union of the Asian Institute of Technology (AIT) got off to an interesting start with tug-of-war competitions on 25 October 2010. AIT Vice President for Academic Affairs, Prof. Joydeep Dutta and Prof. Gabor L. Hornyak of Center of Excellence in Nanotechnology (CoEN), personally entered the fray to lead their team from Nanotechnology, as the event got off to a cracking start. A range of competitions are being organized by the AIT Student Union during the coming weeks as a part of the Mini Olympics.

A study by Robert Lerman, an economics professor at American University, and Harry Holzer, professor at Georgetown University’s Public Policy Institute has revealed that about half of the available positions do not require a college diploma. Instead, these “middle-skill” occupations generally require only a high school education and specific on-the-job or vocational training. Some positions that pay over $50,000 a year in the US do not require a four year degree. These include Air Traffic Controller, Construction Manager, Real Estate Broker and Occupational Therapist Assistant. Read more at this link.

November 2010 edition of the monthly Newsletter of the Asian Institute of Technology (AIT). For feedback, contact Media and Communications...

November 2010 edition of the monthly Newsletter of the Asian Institute of Technology (AIT). For feedback, contact Media and Communications...