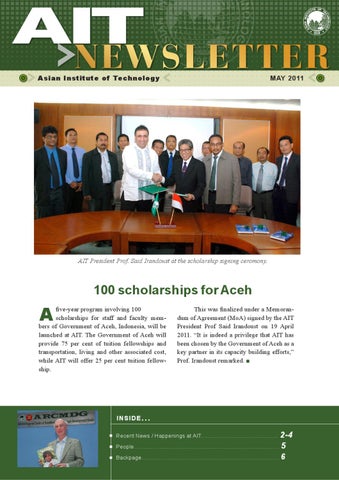 This was finalized under a Memorandum of Agreement (MoA) signed by the AIT President Prof Said Irandoust on 19 April 2011. â&#x20AC;&#x153;It is indeed a privilege that AIT has been chosen by the Government of Aceh as a key partner in its capacity building efforts,â&#x20AC;? Prof. Irandoust remarked.

AIT donates to Japan AIT donated 200,000 Thai Baht to the Government of Japan towards reconstruction activities following the disasters that struck Japan on 11 March 2011. The

donation was handed over by Prof. Said Irandoust, President, AIT, to the Ambassador of Japan, H.E. Mr. Seiji Kojima at the Embassy of Japan, Bangkok on 20 April 2011. Prof. Irandoust also expressed his sincere condolences on behalf of AIT. The donation from the AIT community followed a voluntary effort of many individuals and groups, particularly the AIT Student Union, which had organized several activities for fund raising. Mr. Lawal Umar Kankia, President AIT Student Union, informed H.E. Mr. Kojima about the range of activities organized by the Student Union. He said that a strong sense of unity prevails among the AIT community in its efforts to help people in Japan, who are very much “a part of AIT.”

A step forward towards a satellite campus in Vietnam AIT moved closer towards establishing a satellite campus in Vietnam, with a delegation headed by the Vice Chairman of the People’s Committee of Ho Chi Minh City, Mr. Hua Ngoc Thuan, offering land and “all support” to AIT to help establish a full-fledged AIT-Vietnam campus. The eight-member strong delegation from Vietnam, which visited AIT on 18 April 2011, stated that they would prepare a final proposal and complete all formalities, so that Mr. Hua Ngoc Thuan the concept of AIT satellite campus in Vietnam can be presented to the appropriate authorities. Mr. Thuan stated that an area ranging between 22-25 hectares will be available exclusively for AIT to establish a university at Ho Chi Minh City. “I have already informed the Vice Prime Minister of Vietnam and the Vice Minister of Education about the proposal to partner with AIT to establish a University,” Mr. Thuang added.

AIT and Sweden’s BTH discuss sustainability education Blekinge Institute of Technology (BTH), Sweden, recently played host to AIT, represented by Dr. Jonathan Shaw, Director of AIT Extension, for discussions on building a dualdegree Master’s program to be launched in 2012. Dr. Shaw discussed collaboration opportunities with Prof. Anders Hederstierna, Pro Vice-Chancellor; Mr. Ihsan Zakri, Project Coordinator at External Relations; Dr. Stefan Sjödahl, Acting Deputy Dean of School of Engineering; and Ms.Tamara Connell, Programme Director of the Master in Strategic Leadership towards Sustainability Program. For BTH, the collaboration with AIT offers an exciting opportunity to develop understanding and awareness of sustainable development needs in the Asian context. For AIT, the collaboration is attractive due to BTH’s strong reputation in engineering education for sustainable development, which

has earned it the top ranking in Sweden and the number three rank in Europe. BTH and AIT are planning a one-week executive development program in leadership for sustainability, to be hosted at the main AIT campus in Thailand, in December 2011.

ARCMDG launches Freedom from Want Freedom from Want, a new magazine produced and published by the ASEAN Regional Center of Excellence on Millennium Development Goals (ARCMDG at AIT), reached the public in early April 2011 in both print and online. According to Dr. Sandro Calvani, Director of ARCMDG at AIT and editor-in-chief of the magazine, Freedom from Want targets development professionals working in the field who seek innovative and proper tools to accelerate sustainable development work to obtain real, concrete development goals. The publication also aims to engage those interested in the views of university lecturers and thought leaders, and is not necessarily the prescribed recommendations of the United Nations, he said. “We believe that we can reach 65,000 people in at least 50 Asian countries,” Dr. Calvani said.

Dr. Sandro Calvani with the inaugural issue of “Freedom from Want.” The publication can be downloaded from these two links:

Following a five-day visit by senior officials to the French overseas Department of Réunion Island, AIT signed a General Declaration of Understanding on 9 April 2011 between AIT, CIRAD and University of La Réunion, France. The tripartite General Declaration of Understanding, signed on behalf of AIT by Prof. Sudip Rakshit, Vice President for Research, expresses the intention to collaborate on academic exchanges of scientists and faculty, joint research, student mobility, joint thesis, publications, and will explore the possibility of a joint Master’s program, especially one on ecological intensification research. Prof. Rakshit led a delegation from 4-9 April 2011 to Reunion. Mr. Olivier Dréan, Coordinator of AIT-French collaboration, facilitated the mission.

Nepal Education Foundation-Consortium of Colleges (NEF-CCN), Nepal is keen to offer joint programs with AIT. These include a two-stage Bachelor’s and Master’s programs, and a five-year unified BachelorMaster’s degree. An Memorandum of Understanding (MoU) signed by Dr. Sriam Bhagut Mathe, Chairperson, NEF-CCN, and Prof. Said Irandoust, President, AIT, proposes offering a two-stage Master’s program in business administration, environment and energy, and biotechnology. A two-stage Bachelor’s program in Information and Communication Technologies (ICT) and Civil and Infrastructure Engineering is also planned. The delegation from NEF-CCN also expressed their desire to offer Professional Master’s in hydropower, tourism and hospitality management; apart from an Executive Master’s in Business Administration (MBA).

PEOPLE AIT alumnus wins award, dedicates to faculty Mr. Navaneethan Navaratnam, an AIT alumnus from Environmental Engineering and Management (EEM) field of study, has been awarded with the “2011 Radebaugh Award” by the Central States Water Environment Association (CSWEA), United States. While conveying the news of his selection for the award, Mr. Navaneethan not only expressed his gratitude, but he has also dedicated the award to Prof. Chettiyappan Visvanathan of AIT’s EEM and Dr. Samir K. Khanal of the University of Hawai at Mr. Navaneethan Mānoa. Prof. Visvanathan was the Chairperson guiding Mr. Navaneethan’s thesis when Navaratnam he was pursuing his Master’s in Engineering at AIT; and Dr. Khanal, then with Iowa State University, was the co-chairperson. In a message to his former advisors, Mr. Navaneethan says, “I would like to dedicate this award to you both.”

The Open House organized by the AIT on 22 and 29 April 2011 witnessed participation from interested students from Bangkok and neighboring areas. With a desire to pursue academics in an international institute of higher learning like AIT, interested students, some of whom were accompanied by their parents, came to learn about the Institute. Welcomed at the Milton E. Bender Jr. Auditorium by Ms. Wannapa Pliansri, Coordinator, Royal Thai Government Relations, and in-charge, Government Relations Unit (GRU), External Relations and Communications Office (ERCO), the students were introduced to AIT and its offerings. “AIT is an international institute with students from almost four dozen countries,” Ms. Wannapa said. She added that a number of scholarships and fellowships were available to students to study at AIT. The Institute offers HM King’s and HM Queen’s Scholarships, apart from fellowships from the Royal Thai Government. Mr. Benjamin A. Gargabite, Coordinator, Admissions and Scholarships, provided details regarding the admission process at AIT.

PEOPLE AIT alumnus appointed Ledcor Group Applied Research Chair Dr. Haneef Mian, an AIT alumnus has been appointed the Ledcor Group Applied Research Chair in Oil Sands Environmental Sustainability at Northern Alberta Institute of Technology (NAIT), Canada. Dr. Haneef credits AIT for the knowledge gained during graduate studies, and the advice offered to him at the Environmental Engineering and Management (EEM) program. “The graduate training at AIT-EEM provided me with the state-of-the-art tools, techniques and practices that assisted me in pushing the envelope,” he says. Describing his studies at AIT as “amazing,” Dr. Haneef recalls that there were challenges along the way, and that he still reflects on the advice and knowledge gained during graduate studies. “Kudos to all for making my time at AIT memorable, enjoyable and extremely productive, and thank you for contributing to my career,” he says. Dr. Haneef, who was earlier with the Energy Resources Control Board (ERCB), completed his Master’s from AIT in 1997.

The team from Nepal in the drama competition.

As the lights dimmed and the spotlight shone, a bevy of AIT’s finest performing artists took to the Conference Center auditorium stage on 1 April 2011 to sing, dance and entertain for the sheer love of performance and to show solidarity for the victims of the recent catastrophe in Japan. AIT Cultural Show 2011 attracted a full house of over 500 who witnessed a wide variety of acts and nationalities compete in singing, drama, talent show, and dance competitions.

Organized on 1 April 2011 under the theme “We Unite in Solidarity” the evening brought out the very best of what the AIT Community represents. As teams and individuals vied for the judges’ approval, organizers said the competition took a back-seat to the spirit of international togetherness on display. The Gender and Culture Committee of the AIT Student Union spearheaded a donation box for Japan at the auditorium’s entrance, and the capacity crowd observed one minute of silence for Japan prior to the show’s opening curtain.

Is cost of learning dropping? “While the ‘cost’ of learning is falling dramatically, the cost of college continues to rise,” says TechCrunch in an article titled “Higher Education’s Toughest Test.” Written by Jon Bische and Semil Shah, the article compares the sub-prime crisis with the spiraling cost of education. It also refers to Peter Thiel’s “20 Under 20 Fellowship”, which pays bright students to drop out of college. Read more at this link http://techcrunch.com/2011/04/24/highereducation%E2%80%99s-toughest-test/

May 2011 edition of the monthly Newsletter of the Asian Institute of Technology (AIT). For feedback, contact Media and Communications Unit...

May 2011 edition of the monthly Newsletter of the Asian Institute of Technology (AIT). For feedback, contact Media and Communications Unit...