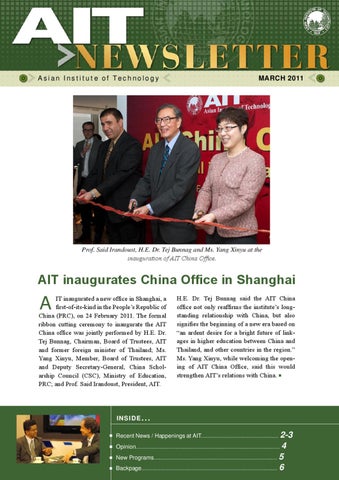 IT inaugurated a new office in Shanghai, a first-of-its-kind in the People’s Republic of China (PRC), on 24 February 2011. The formal ribbon cutting ceremony to inaugurate the AIT China office was jointly performed by H.E. Dr. Tej Bunnag, Chairman, Board of Trustees, AIT and former foreign minister of Thailand; Ms. Yang Xinyu, Member, Board of Trustees, AIT and Deputy Secretary-General, China Scholarship Council (CSC), Ministry of Education, PRC; and Prof. Said Irandoust, President, AIT.

H.E. Dr. Tej Bunnag said the AIT China office not only reaffirms the institute’s longstanding relationship with China, but also signifies the beginning of a new era based on “an ardent desire for a bright future of linkages in higher education between China and Thailand, and other countries in the region.” Ms. Yang Xinyu, while welcoming the opening of AIT China Office, said this would strengthen AIT’s relations with China.

Gates Foundation would love to work with AIT: Director

AIT enjoys a unique position and the Bill & Melinda Gates Foundation is exploring the possibility of AIT being an Asian node for regional cooperation. The Institute is high on our radar, and the Foundation would

love to work with AIT. These were the remarks of Dr. Frank Rijsberman, Director, Water, Sanitation and Hygiene, Bill & Melinda Gates Foundation, during a visit to AIT on 11 February 2011. Dr. Rijsberman stated that the Foundation is looking towards AIT to come up with unique and innovative solutions in the field of sanitation. Impressed with the AIT’s research, laboratory work and scientific papers, Dr. Rijsberman said they were interested to incentivize a move from laboratories to the field and a focus on practice and applications. “We are looking for innovations and technology, which can benefit 80 per cent of the population that does not have access to sanitation,” he added. The delegation also included Mr. Doulaye Kone, Senior Program Officer, Bill & Melinda Gates Foundation.

Country Director, Thailand Resident Mission of the Asian Development Bank (ADB), Mr. Craig M. Steffensen, appreciated the role played by Asian Institute of Technology (AIT), stating that it is heartening that the institute is producing graduates who return to their home countries to help in the nation building process.

H.E. Mr. S.B. Dissanayake, Minister of Higher Education, Sri Lanka, has welcomed the initial idea of opening of an AIT city office in Colombo. The minister suggested that the AIT Colombo office could offer executive short-term training programs in Sri Lanka, apart from overseeing the development of a full-fledged AIT campus in Hambantota. The minister made these remarks during a meeting with the AIT President Prof. Said Irandoust and Mr. Sanjeev Jayasinghe, Director Fundraising and Head AIT-Sri Lanka Satellite Campus Task Force, on 15 February 2011.

Mr. Steffensen referred to his experience in Afghanistan where AIT alumni are engaged in infrastructure development, particularly creating the road network in the country. At AIT on his maiden visit as ADB Country Director on 24 February 2011, Mr. Steffensen said he was aware of the long term engagement of ADB with AIT.

Prof. Chai who led a delegation comprising of Dr. Jeh Won Lee, Vice President for Planning and Budget, and Ms. Jungchoon Lee, Deputy Manager of International Cooperation, Office of International Programs, stated that Yeungnam University was keen on strengthening its relations with AIT. He was curious to know if there are any other similar international institutes of higher education in other parts of the world. Prof. Chai explored the idea of offering realtime distance learning courses jointly by AIT and Yeungnam University. Ms. Lee also proposed that Yeungnam University could offer select scholarships to AIT students under an exchange program.

‘AIT gave me the break I needed’ - Oracle Corp VP Dr. Rafiul Ahad, Vice President, Collaboration Product Development, Oracle Corporation paid his tribute to his alma mater stating that AIT gave him the break that he needed. Visiting the AIT campus on 14 February 2011, Dr. Ahad explained to senior fundraising officials the impact AIT had on his professional career and personal life. “AIT was also where I met my wife, Frances Kasala, who was my classmate,” he joked playfully to a large audience attending his special alumni lecture at AIT on the topic “Cloud Computing: What, Why and How.” Watching her husband address the packed Milton E. Bender Jr. Auditorium, fittingly enough on Valentine’s Day, AIT alumna Ms. Frances Kasala, remembered the lecture hall

Prof. Worsak Kanok-Nukulchai (left) and Dr. Rafiul Ahad vividly. “This was where we all met on our first day and had to show our passports,” the native of Batangas, Philippines laughed. Dr. Ahad also pledged to do what he could back home in California’s Bay area to assist AIT’s fundraising campaign.

AIT signs MOU with Nepal based Hydro Lab Nepal based Hydro Lab Private Limited is keen on mutual sharing of technical expertise and research facilities with AIT. It also seeks to create a partnership for consultancy work related to hydraulic studies and river works. This was finalized on 16 February 2011 in a Memorandum of Understanding (MOU), signed by Prof. Said Irandoust, President, AIT and Dr. Meg B. Bishwakarma, General Manager, Hydro Lab, Nepal. Dr. Bishwakarma stated that they are keen to offer student internships and exchange of staff, apart from other academic and educational exchanges. During his visit to AIT, he was accompanied by Mr. Yogesh Khadka, laboratory manager, Hydro Lab. Dr. Meg B. Bishwakarma

a long time the education system in Thailand “ For has been facing a dilemma over policies. Reminis-

cent of the Orientalist versus Anglicist debate which took place in most countries, policy makers in Thailand have also been caught between education inspired by Western universities vis-a-vis the indigenous model. The new century, however, may render many such debates irrelevant. Advances in technology, new pedagogical techniques and the creation of knowledge societies have catapulted education to a totally different trajectory.

A few trends in higher education are clearly discernible. No single university or institute is in a position to respond to the burgeoning demands of society. The collective demands on higher education are so high that governments are not in a position to meet the requirements. Two of the biggest markets in Asia - China and India - have realised that the market is simply too huge for the governments to serve, and they are actively inviting foreign partners. China was an early starter, and in 2003 it had already invited foreign universities to establish partnerships in China. In March last year, India introduced an act in parliament allowing foreign universities to establish a base in India….

Read the entire article at this link http://www.bangkokpost.com/opinion/opinion/220396/thai-universities-face-a-brave-new-world

Prof Joydeep Dutta being interviewed by Mr. Kavi Chongkittavorn (right) Nanotechnology will impact society in profound ways and alter the way people live. From cosmetics to sportswear, healthcare to fashion, and agriculture to green technologies, almost anything and everything in our world has the potential to be touched to some degree by the emerging applications of nanotechnology. This was a core message that AIT Vice President for Academic Affairs, Prof. Joydeep Dutta, brought to the television show “Inside Asia” hosted by noted Thai journalist Kavi Chongkittavorn. The 30-minute episode was recorded at The Nation TV studios in Bangkok, and was telecast on 13 February 2011. Prof. Dutta, who is also the director of the Center of Excellence in Nanotechnology, AIT, emphasized the enormous potential nanotechnology has for giving nations a scientific and economic edge.

CSC announces 40 scholarships for Chinese nationals to study at AIT The China Scholarship Council (CSC) has announced 40 scholarships for qualified Chinese candidates to undertake Master’s and Doctoral programs at AIT. A Memorandum of Agreement (MoA) to this effect was signed by Ms. Yang Xinyu, Deputy Secretary-General, of CSC, and Prof. Said Irandoust, President, AIT, during the inauguration ceremony of the AIT China office on 24 February 2011 at Shanghai. CSC will provide 10 annual scholarships for a period of four years. The scholarships shall include tuition, registration, research and visa fee; apart from living stipend and health insurance; and a return international airfare to China by the most economical route. The funding for each Master’s program will be up to 24 months, while the funding for each Doctoral program shall be up to 36 months.

New Programs Professional Master’s in Energy Business Management AIT’s Professional Master’s in Energy Business Management is targeted at professionals who desire an integrated understanding of the global energy business. Participants of the program will be able to combine knowledge of energy and engineering with sound foundations of business management. The focus of this academic program is to provide students in-depth exposure to modern management approaches and skills needed to face the challenge of managing the changing energy business paradigms and energy markets. The program will be run jointly by AIT’s School of Management and School of Environment, Resources and Development.

Professional Master’s in CSR AIT along with CSR-Asia will be offering a Professional Master’s in CSR (MCSR) through AIT’s School of Management and the CSR Asia Center at AIT. The objective of the program is to provide participants with professional competencies and skills in the fields of sustainable development and CSR. The professional MCSR degree comprises eight intensive four-day taught modules, an action research based project and a special study project. The “fly-in, fly-out” structure of the modules offers a high degree of flexibility to suit the realities of balancing a Master’s degree with a demanding job and makes it accessible to professionals from across Asia-Pacific.

tion of the renovated gymnasium at the Student Union building. Mini marathon, slow cycling and relay race were the other activities of the day organized by the Student Union as a part of Sports Day celebrations.

NEET is not Neat Increasing Number of NEETs (Not in Education, Employment or Training) has led to a call of review in education policy in England. According to the Guardian, “the number of 16- to 24-year-olds not in education, work or training in England reached 938,000,” implying that 15.6 per cent of all 16- to 24-yearolds in England were NEETs. Read more at the Guardian http://www.guardian.co.uk/news/datablog/2011/feb/24/neets-statistics However NEETs are not just an issue in England, as a report in People’s Daily Online quotes a study to state that “over 60 per cent of Chinese families have NEET children.” Read more at this link http://english.peopledaily.com.cn/90001/90782/90872/7277071.html

March 2011 edition of the monthly Newsletter of the Asian Institute of Technology (AIT). For feedback, contact Media and Communications Uni...

March 2011 edition of the monthly Newsletter of the Asian Institute of Technology (AIT). For feedback, contact Media and Communications Uni...