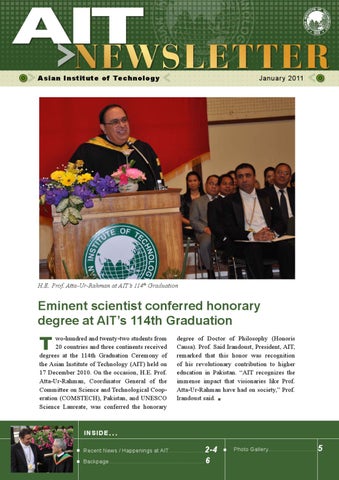 wo-hundred and twenty-two students from 20 countries and three continents received degrees at the 114th Graduation Ceremony of the Asian Institute of Technology (AIT) held on 17 December 2010. On the occasion, H.E. Prof. Atta-Ur-Rahman, Coordinator General of the Committee on Science and Technological Cooperation (COMSTECH), Pakistan, and UNESCO Science Laureate, was conferred the honorary

degree of Doctor of Philosophy (Honoris Causa). Prof. Said Irandoust, President, AIT, remarked that this honor was recognition of his revolutionary contribution to higher education in Pakistan. “AIT recognizes the immense impact that visionaries like Prof. Atta-Ur-Rahman have had on society,” Prof. Irandoust said.

Thailand and Vietnam under the Lower Mekong Initiative (LMI). Dr. Johnson stated that United States Secretary of State, Ms. Hillary Clinton, and foreign ministers of the Lower Mekong Countries have agreed to enhance cooperation in the areas of environment, health, education, and infrastructure development. She was accompanied by Mr. Jacob Schultz, Environment, Science, Technology and Health Officer at the US Embassy in Bangkok.

AIT building its brand in Myanmar With plentiful opportunities existing for AIT in neighboring Myanmar, AIT President Prof. Said Irandoust recently led a team of AIT officials on a three-day promotional visit to Thailand’s neighbor where they met with some of the country’s senior higher education administrators. President Irandoust began the visit on 2 December 2010 by attending the International Conference on Science and Engineering (ICSE) 2010 organized by universities under Myanmar’s Ministry of Science and Technology (MOST). The president used the occasion to meet with highranking officials (including rectors of technological universities) under MOST, which is headed by Director General, Dr. Ko Ko Oo.

Prof. Joydeep Dutta, Vice President for Academic Affairs welcomed Dr. Johnson and Mr. Schultz, and mentioned that AIT is at the forefront of technology, development and education. “AIT can be an ideal platform and partner in the Lower Mekong Initiative,” Prof. Dutta stressed.

If it was not for AIT’s contribution, I would not be here: Pakistan Minister “Asian Institute of Technology (AIT) has been a driving force and had it not been for its contribution, I would not be visiting AIT today.” This was stated by H.E. Mr. Muhammad Azam Khan Swati, Federal Minister for Science and Technology, Pakistan during his maiden visit to AIT on 8 December 2010. The minister described AIT as a “marvelous institute,” and Pakistan as a “long haul partner” of AIT. H.E. Swati stated that Pakistan is looking forward towards an enhanced partnership with AIT, particularly

Sudan, Afghanistan delegations join training program at AIT Nearly 50 delegates from the governments of Sudan and Afghanistan participated in an International Training Program organized by AIT. Welcoming the participants, AIT President, Prof. Said Irandoust, said that AIT was honored to host such a distinguished delegation from the two countries.

security for women, rule of law and human rights, and socio economic development.

data such as the satisfaction scores and perceived brand of key stakeholders including industry, recruiters, students and faculty.

Based on an a survey conducted by Best MBA, AIT’s School of Management (SOM) MBA program has been ranked as number one in Thailand and number eight in Asia. The online MBA network conducted the survey of worldwide ranking of best business schools and MBA programs and ranked them based on objective data such as MBA program return on investment (ROI), which evaluates the cost of the program compared to the average MBA salary increase, and subjective

AIT to offer Professional Master’s program in Sri Lanka AIT will offer a one-year Professional Master’s program in Sri Lanka in the fields of Telecommunications, Technology Management, Information Security, Banking Security and Nanotechnology. This follows a Memorandum of Understanding (MOU) signed by AIT with the EPIC Lanka Group.

Packaging is creating a new revolution in the food industry, and nations will have to adapt to new reusable and biodegradable packaging materials to be able to compete globally. This was stated by Dr. Tipvon Parinyasiri, Director Food Control Division, Food and Drug Administration (FDA), Thailand, while delivering the keynote speech at the “5th International Conference on Innovations in Food and Bioprocess Technology”, organized at the Asian Institute of Technology (AIT). Speaking at the conference, Prof. Said Irandoust, President, AIT highlighted the role that AIT was playing in the field of food and bioprocess technology. Prof. Sudip Kumar Rakshit, Vice President - Research presented a futuristic scenario in his talk “Bio-fuels and food security - moving forward”. Prof. Athapol Noomhorm of School of Environment, Resources and Development (SERD), was the conference chair.

and training of professionals in Sri Lanka, and will include exchange of academic materials, publication and information. AIT will be responsible for curriculum and quality assurance of the program. The MOU follows meetings held by Dr. Nitin V. Afzulpurkar, Dean, School of Engineering and Technology (SET) and Mr. Sanjeev Jayasinghe, Director Fundraising (AIT), with Mr. Nayana in Colombo recently.

AIT hosts eight nation cricket tournament Asian Institute of Technology (AIT) played host to the eight nation 2010 Asian Cricket Council (ACC) Trophy Challenge championships held from 4-11 December 2010. “The lush grounds of AIT were the venue of six matches including Thailand versus Iran, Iran versus Qatar, Iran versus Myanmar, the seventh position playoff match between Brunei and Myanmar, the semi-final showdown between Thailand and Saudi Arabia, and the third place playoff between Qatar and Thailand.” The eight teams were divided into Group ‘A’ comprising of Qatar, Thailand, Iran and Myanmar, while Group ‘B’ comprised of Saudi Arabia, Maldives, China and Brunei. Two

finalist teams, Maldives and Saudi Arabia, qualified for the elite International Cricket Council (ICC) qualifying tournament. The World Cup finals will be jointly hosted by Australia and New Zealand in 2015.

I wish the entire world was like AIT: Graduation speaker The world would be a better place if it were more like the Asian Institute of Technology (AIT). The harmony and diversity in culture and ideas witnessed at AIT, is a role model for the world to emulate. These were the remarks of Mr. David L. Hulse, Representative of the Ford Foundation, Indonesia, while delivering the Graduation address at the 114th graduation at AIT on 17 December 2010. Congratulating the graduates, Mr. Hulse exhorted the graduates to “keeping the spirit of AIT alive” by remaining open to the outside world, welcoming a diversity of thoughts and ideas, and maintaining friendships with people from different countries and leanings. “Be a role model for others,” was his suggestion to all students. “You have to be citizens not just of your hometown or country, but be citizens of the world,” he remarked.

BackPAGE  the National Electronics and Computer Technology Center (NECTEC), and the Thai Robotics Society (TRS), brought together 21 teams of engineering students from universities and colleges across Thailand. The undergraduates were challenged to build autonomous machines that could perform technical tasks of their own, against the clock, and for the review of professional judges.

“Team C2R” from Kasetsart University, Kampangsaen Campus came second, while the third prize was bagged by “Bangrachan Team” from Sing Buri Technical College. The best design award went to “The Limited” from Dhurakij Pundit University. Winners will now travel to India to compete at Techfest being organized by the Indian Institute of Technology (IIT) Bombay from 7-9 January 2011.

Bali School Makes Sustainability a Way of Life “In the midst of the lush, steaming jungle of Bali, along a pitted road, past scattered chickens and singing cicadas, Green School has two dozen buildings made of giant bamboo poles. There are no walls, and there is no air-conditioning. Just gracefully arched roofs, concrete floors and bamboo furniture. There is a big, grassy playground, complete with goalposts made -- yes -- of bamboo; a bamboo bridge across a rock-strewn river; vegetable patches; and a mud-wrestling pit. But there is also a computer lab, a well-stocked library and an array of courses drawn from an internationally recognized curriculum and taught in English.” Read more in the New York Times at this link Follow AIT at • Facebook • Twitter • Youtube

January 2011 edition of the monthly Newsletter of the Asian Institute of Technology (AIT). For feedback, contact Media and Communications U...

January 2011 edition of the monthly Newsletter of the Asian Institute of Technology (AIT). For feedback, contact Media and Communications U...