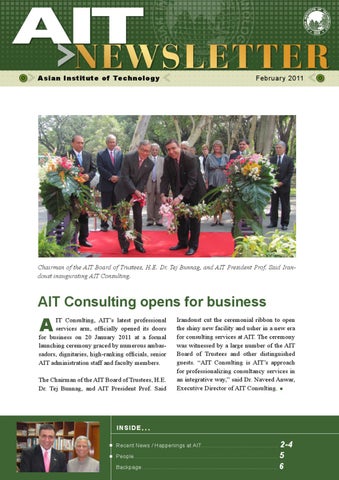 Irandoust cut the ceremonial ribbon to open the shiny new facility and usher in a new era for consulting services at AIT. The ceremony was witnessed by a large number of the AIT Board of Trustees and other distinguished guests. “AIT Consulting is AIT’s approach for professionalizing consultancy services in an integrative way,” said Dr. Naveed Anwar, Executive Director of AIT Consulting.

Norway assures continuous support to AIT Norway has been a long time strong supporter of Asian Institute of Technology (AIT), and it will continue to support AIT in the future. This was stated by Her Excellency Ms. Katja Christina Nordgaard, Ambassador of Kingdom of Norway to Thailand, Cambodia and Myanmar during her visit to AIT on 11 January 2011. H.E. Ms. Katja was impressed by AIT’s achievements and progress since its inception and made detailed inquiries of the programs, strategy and funding pattern of the Institute. Accompanied by Mr. Erik Svedahl, Minister Counsellor and Mr. Moonstan Chatri, Senior Programme Officer of the Royal Norwegian Embassy, the Ambassador stated that higher education, technology and climate change are priority areas for Norway. “Since the situation has changed ever since the establishment of AIT, I am keen to know how AIT views its role in the future,” H.E. Ms. Katja said. She remarked that her visit was intended to acquire more information about AIT.

“Can Tho University currently hosts an AIT-Vietnam office and it is looking towards organizing and offering more programs,” Prof. Tri said. He added that the delegation of Can Tho University officials included heads of various units of the university, so that they could learn more about AIT, its management, administration and structure.

LBU seeks AIT’s partnership Lucian Blaga University of Sibiu (LBU), which is an Erasmus Mundus partner of Asian Institute of Technology (AIT) under the Erasmus Mundus Mobility with Asia (EMMAsia East project of the European Commission), is interested in extending its collaboration to other spheres. This was stated by Prof. Constantin Oprean, Rector of LBU during a visit to AIT on 21 January 2011.

The delegation from LBU visiting AIT.

“We are looking towards projects where we can cooperate with AIT, particularly in research,” Prof. Oprean told senior AIT officials. LBU, which is a 220 year old university, is well known in the fields of information technology, computer science and mechatronics. The University has strong linkages with industry, and has initiated academic programs in close collaboration with the private sector.

Recent News / happenings at AIT “I belong to the AIT fan club” “I belong to the AIT fan club and I admire AIT.” These were the comments of Mr. Jadul Apichatabutrd, Chief Inspector General, Ministry of Interior of Thailand, during an interview conducted on the sidelines of the Regional Workshop on the ASEAN Roadmap for the Attainment of Millennium Development Goals (MDGs),” organized on 24-25 January 2011 at Bangkok. Mr. Apichatabutrd appreciated the work done by AIT, particularly as a center of education among ASEAN nations. Mr. Nicholas Rosellini, Deputy Regional Director, Regional Bureau for Asia and the Pacific, United Nations Development Programme (UNDP) stated that it is important that AIT is working on issues to do

Mr. Jadul Apichatabutrd (left) and Mr. Nicholas Rosellini with MDGs.The two-day workshop was organized by ASEAN secretariat, Ministry of Interior of Thailand and UNDP, with cooperation from ASEAN Regional Center of Excellence on MDGs (ARCMDG) of AIT.

Japan Aerospace Exploration Agency (JAXA) considers AIT to be a very strong partner in terms of space technology related work and would continue its collaboration. This was stated by Dr. Masanori Homma, Executive Director, JAXA during a visit to AIT on 26 January 2011. “Our association with AIT is not restricted to capacity building and education alone, since AIT’s contribution extends to substantive issues,” Dr. Homma said. Dr. Homma was accompanied by Mr. Shinichi Mizumoto, Director, JAXA Bangkok Office. JAXA has been secording staff and faculty, apart from supporting research at AIT.

Ms. Beng Hwee made the comments during a networking visit to the Institute on 21 January 2011, meeting with AIT’s Vice President for Resources Development (VP-RD), Prof. Worsak Kanok-Nakulchai, and other administration staff members.

Prof. Tabucanon to be Professor Emeritus Prof. Mario Tabucanon will be honored with Emeritus Professorship by the Asian Institute of Technology (AIT). Prof. Tabucanon served AIT as Acting President between January-June 2005. He has held senior positions at AIT, including that of Provost, Vice President, Dean and Chairman. He is currently Visiting Professor, Institute of Advanced Studies, United Nations University, Japan. Prof. Tabucanon earned his Doctorate of Engineering from AIT in Industrial Engineering and Management (1977) and Master’s in Systems Engineering and Management field of study (1974). Prof. Ram Shrestha to be Professor Emeritus Prof. Ram Manohar Shrestha will be honored with Emeritus Professorship at the Asian Institute of Technology (AIT). Prof. Shrestha obtained his Doctorate of Engineering in Resource Economics and Management (1986) and his Master of Engineering in Industrial Engineering and Management (1982) from AIT, after which he served AIT in various positions. Prof. Shrestha also served as Chairman, Academic Senate, AIT, from August 2007 to September 2009. AIT Professor honored as “Air Quality Hero” Dr. Oanh Thi Kim Nguyen, Professor at AIT’s School of Environment, Resources and Development (SERD), has been awarded the plaque “Air Quality Hero” at the Better Air Quality (BAQ) Conference held at Singapore recently. Dr. Oanh was felicitated by the organizers for “consistent best presentation, most presentations and most number of abstracts submitted for BAQ over the years.”

MacArthur Foundation honor for AIT alumnus The Royal Society for Protection of Nature (Bhutan), an organization headed by Dr. Lam Dorji, an alumnus of Asian Institute of Technology (AIT), has won the MacArthur Award for Creative and Effective Institutions. Dr. Dorji is the executive director of The Royal Society for Protection of Nature (RSPN). Reacting to the award, Dr. Dorji, who completed his doctorate in 2003 from AIT’s School of Environment, Resources and Development (SERD), stated that the award is a result of “harmonious relationship and hard work” of all participants. AIT student stars in prestigious journal An AIT student, Mr. Junaid Alam Memon, will have the rare distinction of his research paper having featured on the cover page of the journal Environmental Management. The February 2011 issue of Environmental Management, published by Springer will feature the article “Irrigation, Natural Resources and Community Occupational Quality in Pakistan” on its cover. Mr. Memon’s photograph of the Indus River basin has also been selected as the cover page picture. The article is coauthored by Mr. Memon and his supervisor Prof. Gopal Bahadur Thapa of AIT’s School of Environment, Resources and Development (SERD).

Nobel Laureate advocates new development path Novel laureate and Chairperson, IPCC, Prof. Rajendra Kumar Pachauri has advocated a new development path, based on community resilience and creation of a sober society, where resources are valorized and consumption is reduced. The development path is based on the understanding that atmosphere, land, water, biodiversity and human society are linked in a complex web of interactions and feedback. Prof. Pachauri made these remarks while delivering a lecture via videoconference at the Asian Institute of Technology on 7 January 2011. Moderated by AIT Alumnus Dr. Srikantha Herath, Senior Academic Programme Officer, United Nations University, Tokyo, the lecture saw nine institutes and universities participate in an interactive session with Prof. Pachauri. Prof. Pachauri reflected on the sixteenth Conference of Parties (COP16) held at Cancun, Mexico, and projected the picture beyond COP16.

AIT President Prof. Said Irandoust advised new students to forge meaningful networks during their stay at AIT. Addressing the batch of 73 new students from 12 countries across four continents on the occasion of January Semester 2011 Orientation Day, Prof. Irandoust stated that AIT provides an international experience, thereby helping students attain a capability which distinguishes them from others. In his welcome remarks, President Prof. Said Irandoust recognized a batch of 18 visiting undergraduate exchange students from Sweden’s University of Borås. This is the first such exchange from University of Borås, where Prof. Irandoust was formerly president.

Communication: a responsibility of all scientists David Dickon, in his year end editorial in SciDev.Net says that “the scientific community should commit to communication as an integral part of a researcher’s professional role”. To this effect he cites the “potentially influential draft set of guidelines drawn up by the Committee on Freedom and Responsibility in the conduct of Science, of the International Council for Science (ICSU)”. The guidelines state “The effective communication of scientific results and viewpoints to the public is an important responsibility of the scientific community. This is particularly so for science that has been publicly funded”. It further adds that “teaching and training in communication skills should be an important part of science education”. The editorial can be read at this link (http://www.scidev.net/en/editorials/communication-a-responsibility-of-all-scientists.html)

while the set of guidelines can be read here

February 2011 edition of the monthly Newsletter of the Asian Institute of Technology (AIT). For feedback, contact Media and Communications U...

February 2011 edition of the monthly Newsletter of the Asian Institute of Technology (AIT). For feedback, contact Media and Communications U...