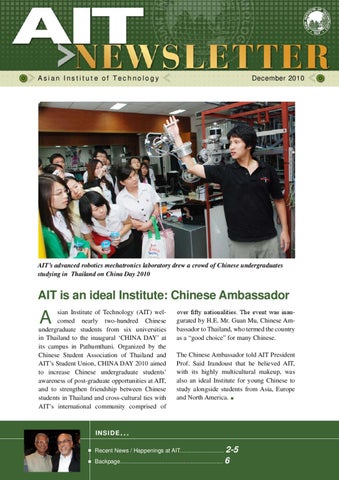 sian Institute of Technology (AIT) wel- comed nearly two-hundred Chinese undergraduate students from six universities in Thailand to the inaugural ‘CHINA DAY’ at its campus in Pathumthani. Organized by the Chinese Student Association of Thailand and AIT’s Student Union, CHINA DAY 2010 aimed to increase Chinese undergraduate students’ awareness of post-graduate opportunities at AIT, and to strengthen friendship between Chinese students in Thailand and cross-cultural ties with AIT’s international community comprised of

over fifty nationalities. The event was inaugurated by H.E. Mr. Guan Mu, Chinese Ambassador to Thailand, who termed the country as a “good choice” for many Chinese. The Chinese Ambassador told AIT President Prof. Said Irandoust that he believed AIT, with its highly multicultural makeup, was also an ideal Institute for young Chinese to study alongside students from Asia, Europe and North America.

AIT takes the lead at international MDG conference Over 400 participants gathered in Bangkok for a “Language, Education and the Millennium Development Goals (MDGs)” conference co-organized and sponsored by the Asean Regional Center for MDGs (ARCMDG) of AIT. The conference from 9 - 11 November 2010 was inaugurated by H. E. Abhisit Vejjajiva, Prime Minister of Thailand. Meanwhile ARCMDG has also joined the working group for first “ASEAN Statistical Report on MDGs Indicators”.

Dr. Riaz Khan, Director, Yunus Center at AIT, attended the Summit on behalf of AIT. He explained: “The Summit gave us the opportunity to meet other organizations involved in social business and to explore the possibilities for cooperation between AIT and the Yunus Centre at Glasgow Caledonian University, HEC Paris and Kyushu University.”

All indicators are green: CIRAD All indicators are green for an enhanced collaboration with the Asian Institute of Technology (AIT). This was stated by Dr. Gerard Matheron, President Managing Director of CIRAD, during his maiden visit to the AIT on 29 November 2010. He remarked that the “objectives and areas of interest of AIT are in concordance with CIRAD” and this very clearly reinforces cooperation and collaboration between the two. Dr. Matheron sought ways to create teams which can work together towards the achievement of joint goals and objectives. Accompanying Dr. Matheron was Dr. Jacques Pages, Advisor to CIRAD President, who remarked that AIT had positively changed over the past 15 years.

Remain focused, is Ambassador’s mantra for AIT A focus on the three principles of “People, Planet and Partnerships (3P)” can help guide the path towards responsible development. This was stated by Ambassador. Curtis S. Chin, former US Executive Director to the Asian Development Bank (ABD), while speaking at the Asian Institute of Technology (AIT) on 11 November 2010.

Ambassador Curtis remarked that the 3P principle has been used by ADB extensively to ensure adherence to issues like environmental and indigenous safeguards. Drawing parallels between ADB’s Strategy 2020 and AIT’s Strategy 2013, Ambassador Curtis remarked that AIT should consider concentrating on few elements, while at the same time keeping an eye to the changing dynamics in the region. “A major challenge for any organization is to ensure consistency of vision and focus,” he added.

Nepal seeks AIT’s expertise on food safety issues Department of Food Technology and Quality Control (DFTQC), Government of Nepal is keen to have a formal partnership with the Asian Institute of Technology (AIT). This was stated by a delegation of DFTQC headed by Ms. Jiwan Prava Lama, Director General during a visit to AIT on 18 November 2010. Dr. Megh Raj Bhandari, Senior Food Research officer, DFTQC

provided a detailed presentation on behalf of DFTQC and highlighted the areas where it can collaborate with AIT. Prof. Sudip Kumar Rakshit, Vice President for Research stated that the Food Engineering and Bioprocess Technology (FEBT) field of study at AIT had been working with DFTQC for a long time and highlighted the new program on Agri-Business Management (ABM) which has been launched at AIT.

AIT to help Vietnam in developing in its marine development strategy Ministry of Natural Resources and Environment (MONRE) of Vietnam is seeking the active participation of the Asian Institute of Technology (AIT) to help develop a “National Strategy on Sustainable Marine Development”. This was conveyed by a 10-member strong delegation from MONRE during a visit to AIT on 16 November 2010. Led by Mr. Nguyen Lanh, Head of Department of Climate Change, Marine and Island under the Institute of Strategy and Policy on Natural Resource and Environment (ISPONRE), the team expressed its intent to engage with AIT to enhance its human resource skills

The Minister made these observations during a visit to AIT on 11 November 2010. The minister stated that it was a great honor to be a founding member of AIT and wanted the engagement levels with AIT to scaled up. H.E. Mr. Afridi was welcomed by Prof. Sudip Kumar Rakshit, Vice President for Research, who elaborated on the partnership between Pakistan and AIT and highlighted AIT’s expertise in the field of environment.

Recent News / happenings at AIT New era of partnership with GTZ on the horizon A new era of AIT-GTZ partnership is on the anvil. This was stated during discussions on 25 November 2010 between Mr. Peter Buri, Deputy Director of the Southeast Asia and Pacific Department of GTZ on behalf of GTZ Headquarters Eschborn; Ms. Cornelia Richter, Director General of the Planning and Development Department at GTZ headquarters and AIT officials led by Prof. Joydeep Dutta, Vice President for Academic Affairs. The pair was accompanied by Mr. Apichai Sunchindah, Policy Advisor, GTZ, Thailand. “New cooperation with AIT would not be like before. We are interested to explore new, distinct frameworks that respond to new opportunities,” Ms. Richter said, calling AIT “one of the most important regional hubs for education in Southeast Asia.”

Thai students explore AIT Forty undergraduate students from six universities and institutes of Thailand visited the Asian Institute of Technology (AIT) on 5 November 2010, to interact with students and learn more about the Institute. The students, who came from Chulalongkorn University, Thammasat University, Kasetsart University, Rajamangala University of Technology, King Mongkut Institute of Technology (Thonburi and Ladkrabang), and Sirindhorn International Institute of Technology (SIIT), were fascinated by the internationality of AIT and its diverse range of offerings. The students visited AIT’s Tsunami Wave Flume and the Xayaburi Dam model followed by a visit to the School of Management. They were shown the self-operated bicycle at Mechatronics field of study at the Industrial System Engineering (ISE) in AIT’s School of Engineering and Technology. They also visited the Center of Excellence in Nanotechnology and AIT’s School of Environment, Resources and Development. They were provided with a practical demonstration of the use of satellites in data collection. The day ended with games, entertainment and the International Food Fair.

An intense moment from the workshop outcomes and outputs to consolidate AIT’s leadership in research in select areas of Sustainable Development in the context of Climate Change (SDCC), and, provided a road map for strengthening quality or research, research collaborations and research resource mobilization.

Recent News / happenings at AIT November 2010 Career Day sees more companies than ever Thirty-four Thai and foreign companies took their search for employee talent to AIT on November 12 by participating in the AIT Career Fair. AIT students and new graduates alike packed the Conference Center to network with corporate recruiters and investigate job and internship opportunities.

AIT and NIDA draw closer at 32nd Traditional Sports Day Friendship was the name of the game at the 32nd annual AIT-NIDA Traditional Sports Day held on 15 November 2010 at the Asian Institute of Technology (AIT). Though women’s and men’s teams competed to win in eight sports, the event succeeded in drawing both institutes closer together. AIT captured 11 of 13 events at the inter-collegiate competition with Thailand’s National Institute of Development Administration (NIDA), but both institutes were equal winners, officials reminded athletes and spectators. Competing under strong sunshine and in an air of intervarsity camaraderie, 65 AIT students and 40 NIDA students competed in tug of war, basketball, football, chairball, table tennis, petanque, snooker, and badminton.

16 students awarded by Japanese Ambassador Sixteen students of the Asian Institute of Technology (AIT) were awarded schlolarship certificates by H.E. Mr. Seiji Kojima, Ambassador Extraordinary and Plenipotentiary, Embassy of Japan, at a simple and elegant ceremony at AIT on 1 November 2010. H.E. Mr. Kojima congratulated all students stating that he was sure that all scholarship recipients are highly motivated individuals. The Ambassador remarked that he was very happy to visit the AIT campus. “AIT is very widely known in Japan,” H.E. Mr. Kojima added. The Ambassador was accompanied by Mr. Masato Otaka, Minister; Mr. Hiroshi Tomita, First Secretary and Mr. Tomoyuki Sakairi, First Secretary from the Embassy of Japan. The Ambassador also visited the AIT Conference Center and the AIT library -- two buildings which were earlier gifted to AIT by the Govern-

Green AIT Day salutes its International character The international character of the Asian Institute of Technology (AIT) was very much in focus on the occasion of the ‘Green AIT Day’ organized on 19 November 2010. Over 150 students from nearly three dozen countries planted trees on behalf of their country – an act that was in line with AIT’s image of being a ‘Clean and Green Campus’. The function took place at the AIT football field, where students planted the tree “Lagerstroemia speciosa”, also known as Pride of India. The tree is small to medium size and grows up to 20 meters. Organized by the AIT Student Union, the event witnessed participation from the entire AIT community. According to Mr. Sohail Mehr, Chairperson of the AIT Student Union campus and environment committee, each tree was jointly planted by representatives of four countries.

More Professors give out hand-held devices to monitor students and engage them If any of the 70 undergraduates in Prof. Bill White’s “Organizational Behavior” course here at Northwestern University are late for class, or not paying attention, he will know without having to scan the lecture hall. Every student in Mr. White’s class has been assigned a palm-size, wireless device that looks like a TV remote but has a far less entertaining purpose. With their clickers in hand, the students in Mr. White’s class automatically clock in as “present” as they walk into class. They then use the numbered buttons on the devices to answer multiple-choice quizzes that count for nearly 20 percent of their grade, and that always begin precisely one minute into class. Later, with a click, they can signal to their teacher without raising a hand that they are confused by the day’s lesson. Read more at this link

December 2010 edition of the monthly Newsletter of the Asian Institute of Technology (AIT). For feedback, contact Media and Communications...

December 2010 edition of the monthly Newsletter of the Asian Institute of Technology (AIT). For feedback, contact Media and Communications...