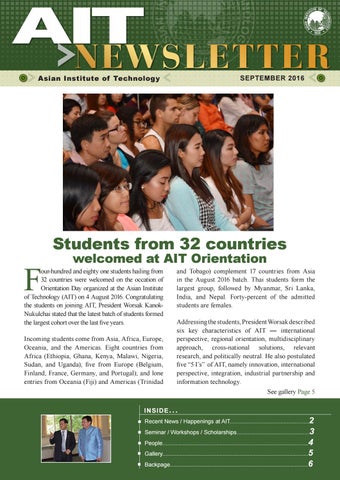 our-hundred and eighty one students hailing from 32 countries were welcomed on the occation of Orientation Day organized at the Asian Institute of Technology (AIT) on 4 August 2016. Congratulating the students on joining AIT, President Worsak KanokNukulchai stated that the latest batch of students formed the largest cohort over the last five years.

IT can play a significant role in achieving the goal of “Thailand 4.0,” and the country will like to leverage AIT’s global network so that it can work towards sustainable development of Thailand and the region. These were the remarks of H.E. Dr. Suvit Maesincee, Deputy Minister of Commerce during his visit to AIT, where he delivered a special lecture on “Thailand 4.0” on 30 August 2016. The Minister recommended a three-point action plan for AIT. “AIT should serve as a specialized institute that is focused on research,” Dr. Suvit said. This way, AIT can create a special place for itself and not com-

pete with traditional universities, who are trying to become comprehensive universities, he added. Secondly, AIT can take a lead role in improving the quality of life of people based on globally accepted Sustainable Development Goals (SDGs). Thirdly, AIT should remain focused on core issues of academics and research. This could complement Thailand’s effort to tacle challenges of climate change, water management, forestry and challenges of ageing societies, he added. “AIT can play a critical part in making it (Thailand 4.0) happen,” Minister Suvit concluded. The Minister was accompanied by Dr. Verapong Chaiperm, Governor, Industrial Estate Authority of Thailand (I-EA-T); and Patra Atcharaniwat, Trade Officer, Ministry of Commerce. AIT President Prof. Worsak Kanok-Nukulchai stated that international orientation was a core strength of AIT, and he assured the Minister of AIT’s desire to contribute towards Thailand and the region. He added that AIT has benefited from Thailand’s generosity, and it would be glad to serve as an academic and research platform for the benefit of mankind.

Delegates at the CAP workshop.​

AIT team at the Aquamimicry workshop.

With shrimp farming in Thailand facing considerable challenges in recent years, AIT will be assuming a lead role in research and dissemination of aquamimicry technology. “The technology has great potential, and AIT has invited farmers to establish a prototype demonstration project, where farmers can use AIT ponds and the Institute can serve as a knowledge partner,” AIT President Prof. Worsak KanokNukulchai remarked. Dr. K R Salin of AIT, who is spearheading biofloc workshops in Thailand, remarked that aquamimicry has gained traction in recent months after the success of a few select farmers who were successful in reversing the losses suffered in traditional shrimp farming. “In Aquamimicry, farmers combine sustainable and intensive farming, where they try and recreate natural biodiversity in artificial ponds,” Dr. Salin said. The workshop was jointly organized by Aquamimicry Aquaculture Alliance (AAA), AIT,Thai Organic Shrimp Group, Kasetsart University and Institution of Aquaculture (Singapore)​.

Handing over the scholarship cheque to AIT on 25 August 2016, BCP President Mr. Chaiwat Kovavisarach, who is an AIT alumnus (Master’s in Industrial Engineering and Management, 1991), remarked that BCP wishes that their association with AIT goes beyond scholarships. This is the second tranche of two scholarships awarded by BCP to AIT students. Mr. Yodphot Wongrukmit, Senior Executive Vice President, Corporate Administration and Information Technology, BCP, also attended the ceremony.

WE Consultants handing over the cheque at AIT.

Wisit Engineering Consultants Limited (WE Consultants) has granted a 1 million Baht scholarship for a student to pursue a Master’s degree program in Structural Engineering at AIT. Managing Director of WE Consultants, Dr. Wisit U Pongsa announced this during his visit to AIT on 11 August 2016.

Dr. Wisit remarked that he was “pleased and honored to be a patron to an AIT student.” Stating that his entire career has revolved around engineering, Dr. Wisit added that the scholarship was his way of contributing to his profession. Dr. Wisit was accompanied by the Managing Director of WE International Consultants, Mr. Wirat Ratanawetchasit, an AIT alumnus from Structural Engineering (Master’s, 1997).

Dr P Abdul Salam awarded 2016 Thailand Frontier Researcher Award Dr. P Abdul Salam has won the Thomson Reuters Thailand Frontier Researcher Award for 2016. The award was granted “in recognition of pioneering a new frontier in research, based on core papers comprising the world’s top 1% of Highly Cited Papers in the field of Engineering.” Dr. Salam, who serves as Associate Professor in Energy field of study at AIT’s School of Environment, Resources and Development (SERD), received the award certificate during the Innovation Forum organized by Thomson Reuters and Office of Higher Education Commission (OHEC), Thailand on 25 August 2016. He also presented his research activities at AIT. The certificate was jointly awarded by the OHEC Secretary General Aporn Kanvong, and Arto Valio, Vice President, ASEAN & North Asia, Intellectual Property and Science, Thomson Reuters.

Examining sudden buildings collapse: DAF Seminar Recall the 9-11 disaster when the Twin Towers collapsed after being struck by aeroplanes. Or the 22-storey 1968 Ronan Point Building in the United KingProf. Sashi Kunnath dom which witnessed a partial collapse following a gas explosion. Such situations have drawn increased attention in recent years, and they were the focus of AIT’s Sixth Distinguished Adjunct Faculty (DAF) Seminar delivered by Prof. Sashi Kunnath on 22 August 2016. Titled “Progressive Collapse Analysis of Reinforced Concrete Frame Buildings following Sudden Column Loss,” Prof. Sashi’s lecture illustrated the mechanics of failure in structural building systems due to the sudden loss of a load-bearing element.

For feedback, contact Office of Media and Communications omco@ait.asia

September 2016 edition of the monthly newsletter of the Asian Institute of Technology (AIT).

September 2016 edition of the monthly newsletter of the Asian Institute of Technology (AIT).