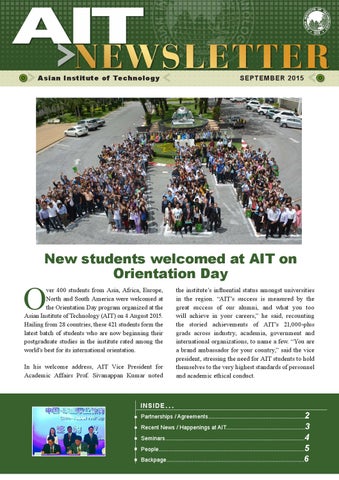 ver 400 students from Asia, Africa, Europe, North and South America were welcomed at the Orientation Day program organized at the Asian Institute of Technology (AIT) on 4 August 2015. Hailing from 28 countries, these 421 students form the latest batch of students who are now beginning their postgraduate studies in the institute rated among the world’s best for its international orientation. In his welcome address, AIT Vice President for Academic Affairs Prof. Sivanappan Kumar noted

the institute’s influential status amongst universities in the region. “AIT’s success is measured by the great success of our alumni, and what you too will achieve in your careers,” he said, recounting the storied achievements of AIT’s 21,000-plus grads across industry, academia, government and international organizations, to name a few. “You are a brand ambassador for your country,” said the vice president, stressing the need for AIT students to hold themselves to the very highest standards of personnel and academic ethical conduct.

Four MoUs signed in China, as AIT extends its reach

Four new agreements were signed by AIT in China, as the Thailandbased institute sought to strengthen its ties with its counterparts. AIT President Prof. Worsak Kanok-Nukulchai signed four agreements with Guizhou Provincial Education Department, Guizhou Vocational and Technical College (GVTC), Guizhou Institute of Technology (GIT), and the Nanjing Institute of Rail Technology (NIRT) respectively. “The agreements also lay the basis for the possibility of getting support from UNESCO to establish “Regional Center for Open Educational Resources (RCOER)” at AIT, increase student intake from China,

AIT signed an MoU with 118-year old Zhejiang University (ZJU) of China, located in Hangzhou, the capital of Zhejiang province. The MoU was signed by AIT President with ZJU's Vice President Zhou Guping on 21 August 2015. ZJU is member of the elite C9 Universities in China, and the MoU will facilitate faculty members from ZJU to experience international teaching and research at AIT. Also accompanying Dr. Zhou Guping were her colleagues, Professors Kan Yue and Chen Hongyu.

UARF partners with AIT The Uddaraju Ananda Raju Foundation (UARF), a conglomeration of integrated agri-aqua-based companies in India, has partnered with AIT. A Memorandum of Agreement (MoA) was signed on 20 August 2015 between Mr. U.K. Viswanadha UARF delegation at AIT. Raju, Managing Trustee, UARF, and Prof. Kazuo Yamamoto, Vice President for Resource Development (VPRD). Besides academic and research activities education, aquaculture and allied sectors, AIT will also help UARF in the establishment of the Andhra Pradesh Fisheries and Ocean University, a first-of-its-kind university in India that will be solely dedicated to the fisheries sector.

MoU on Manpower for Development in Railways AIT has signed a tripartite agreement with Korea Railroad Research Institute (KRRI) and Naresuan University (NU) for developing manpower for the railway industry. The MoU was signed by Dr. Ki-Hwan Kim MoU signing ceremony. President, KRRI; Prof. Sujin Jinahyon, President, NU; and Prof. Worsak Kanok-Nukulchai, President AIT, on the occasion of the 2nd Thailand Rail Academic Symposium (TRAS-2). “Based on our experience on the establishment of the Professional Master's Degrees Program in Offshore Engineering and Management (OTM), AIT can offer a Professional Master's program on High-Speed Railway Engineering and Management to support the rail industries in the region,” Prof. Worsak remarked at the signing ceremony. The Conference was inaugurated by Dr. Pichet Durongkaveroj, Thailand’s Minister of Science and Technology.

Taiwan to tap AIT’s expertise in human resources development for it’s civil servants Directorate-General of Personnel Administration (DGPA), Executive Yuan of Taiwan, plans to send their civil servants to AIT for its human resource development program. This was stated by a delegation of DGPA which Prof. Worsak Kanok-Nukulchai (left) with Ms. Chun-Fang Huang. met with senior AIT officials on 19 August 2015. Ms. Chun-Fang Huang, Section Chief, DGPA, was accompanied by Ms. Chzu-Ju, Executive Officer, DGPA; and Mr. Charn Tanaprakob, Secretary, Taipei Economics and Cultural Office, Bangkok. The DGPA meeting follows the visit of a senior AIT team to Taiwan to felicitate AIT alumnus H.E. Dr. Mao Chi-Kuo on his elevation to the position of Premier of Taiwan. H.E. Dr. Subin Pinkayan, Chairman, AIT, Board of Trustees, and Prof. Worsak Kanok-Nukulchai, President, AIT had met with Premier Mao at a dinner reception hosted by the AIT Alumni Association in his honour on 21 March 2015.

New Department at University of Balochistan, Pakistan owes its existence to AIT

An inter-varsity faculty development program between AIT and the University of Balochistan (UoB) has paid big dividends for the partner university situated in Pakistan. Five newly minted Pakistani doctoral graduates of Regional and Rural Development Planning (RRDP) from the AIT School of Environment, Resources and Development have established a new Department of Disaster Management and Development Studies at UoB in Quetta. Dr. Ainuddin Syed (2012), Dr. Muhammad Ashraf, Dr. Sohail Akram, and Dr. Mumtaz Ali Baloch (2014) and Dr. Ghulam Murtaza (2015), who studied under Prof. Jayant Kumar Routray and Prof. Gopal B Thapa of AIT, have now joined the department. Dr. Ainuddin, who took the lead in convincing his university to establish the department, and Dr. Ashraf specialised in Disaster Preparedness Mitigation and Management (DPMM).

Inaugural Distinguished Adjunct Professor Research Seminar The inaugural Distinguished Adjunct Professor Research Seminar was delivered by Prof. Buddhima Indraratna on the topic "Advancement of Railway Infrastructure: Higher Speeds and Greater Loads,” on 28 August 2015. Prof. Buddhima Indraratna Prof. Indraratna, who taught at AIT in the late 1980s and early 1990's, spoke about the latest research in railways, emerging issues, challenges faced by the transport sector, and the dynamics of high-speed railways. Prof. Indraratna stated that Australia has some of the longest freight trains in the world, leading to situations where the locomotive is in one town, while the last train car is in another. He added that modernization of railways needs to cater to the consumer demand for higher train speeds, greater traffic densities and increased axle loads for sustainable productivity.

Expert outlines the sanitation challenge in India With 53 per cent of the population not having access to toilet in India, the scale of the sanitation challenge is huge. Related to this are issues of access, equity, dignity, as well as open defecation. Outlining various aspects of the “Conceiving an inclusive and sustainable “Swachh” Urban India” was Shubhagato Dasgupta, Senior Fellow, Center for Policy Research, India at AIT on 25 August 2015.

Deciphering the secrets of molecular communication Human body cells communicate and interact with each other, and they can be viewed as nanosized computing Dr. Sasitharan devices. Commu- Balasubramaniam nication occurs at the molecular level, and if we program these molecules, they can act as transmitters and receivers of information. Speaking on the emerging field of molecular communication was Dr. Sasitharan Balasubramaniam of Nano Communication Centre, Department of Electronic and Communication Engineering, Tampere University of Technology, Tampere, Finland, while delivering a talk on “Molecular Communication and the Future Perspectives on the Internet of Bio-Nano Things,” on 19 August 2015.

Teaching disasters to school children Teaching about disasters to school children can be challenging since their memory is often short lived and Dr. Aiko Sakurai they find it difficult to relate to disaster-related events. Narrating her experience with Japanese school children was Dr. Aiko Sakurai, International Research Institute of Disaster Science (IRIDeS), Tohoku University, Japan, at a seminar on “Disaster Recovery Mapping Project at Elementary and Junior High Schools” organized on 11 August 2015. Dr. Aiko, who has worked with school children following Japan’s triple disaster in 2011, stated that in the context of disasters, education is no longer an independent area as it is increasingly becoming more embedded within the environment.

stress the importance of land tenure systems during a disaster.

search presented in the 112-page publication focuses on five Asian countries: India, Indonesia, Malaysia, Sri Lanka and the Philippines, and the case studies from the field

Spawned from the FAO supported ‘Expert Consultation on Land Tenure and Disaster and its Social and Gender Impact’ organized at the Asian Institute of Technology in November 2013, the book features the work of twelve contributing authors and introduces new areas of research and policy for scholars of the subject.

Dr. Hwa-Wei Lee at the ALA award ceremony.

"The Philosophy of Sufficiency Economy"

“The Philosophy of Sufficiency Economy,” formulated by Thailand’s His Majesty King Bhumibol Adulyadej, was highlighted at a mobile exhibition held at AIT. Organized by Thailand’s Public Relations Department (PRD), in cooperation with AIT, and the Royal Development Projects Board, the exhibition titled “Royal Wisdom and Thai Culture” was launched at the AIT Conference Center on 26 August. AIT's multicultural community witnessed Thailand’s distinctive heritage on display and delighted in a traditional dance performance by a troupe from Ritthinarongron School.

September 2015 edition of the monthly newsletter of the Asian Institute of Technology (AIT).

September 2015 edition of the monthly newsletter of the Asian Institute of Technology (AIT).