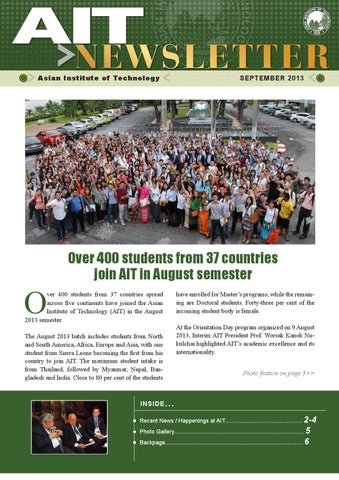 Over 400 students from 37 countries join AIT in August semester

ver 400 students from 37 countries spread across five continents have joined the Asian Institute of Technology (AIT) in the August 2013 semester. The August 2013 batch includes students from North and South America, Africa, Europe and Asia, with one student from Sierra Leone becoming the first from his country to join AIT. The maximum student intake is from Thailand, followed by Myanmar, Nepal, Bangladesh and India. Close to 80 per cent of the students

have enrolled for Masterâ&#x20AC;&#x2122;s programs, while the remaining are Doctoral students. Forty-three per cent of the incoming student body is female. At the Orientation Day program organized on 9 August 2013, Interim AIT President Prof. Worsak Kanok Nukulchai highlighted AITâ&#x20AC;&#x2122;s academic excellence and its internationality. Photo feature on page 5>>

The new Philippine Ambassador to Thailand H.E. Mrs. Jocelyn S. Batoon-Garcia has enjoined members of AIT’s ample Filipino community to engage the embassy in Bangkok. “We are all working to move AIT forward,” Ambassador Batoon-Garcia told faculty and staff from the Philippines.

AIT, Food and Agriculture Organization (FAO) of the United Nations and other partners have joined to launch the ‘Save Food Asia-Pacific Campaign’. Kicking off the region-wide campaign in Bangkok, Thailand on 27-28 August at the High-Level Multi-Stakeholder Consultation on Food Losses and Food Waste in Asia and the Pacific Region, 130 participants representing 20 countries, including four agriculture ministers, pledged to take action.

AIT finds mention in joint statement by Thailand and Pakistan A joint statement issued by the Government of Pakistan and the Kingdom of Thailand issued at the conclusion of the two-day visit of Her Excellency Ms. Yingluck Shinawatra, Prime Minister of Thailand to Pakistan, mentions AIT. AIT and Thammasat University are mentioned in the joint statement issued by the Prime Minister of Thailand, H.E. Ms. Yingluck Shinawatra and the Prime Minister of Pakistan, H.E. Mr. Nawaz Sharif. The joint statement says: “The two leaders expressed satisfaction with the increasing numbers of Thai students studying in Pakistan and Pakistani students studying at the Asian Institute of Technology (AIT) and other institutions of higher learning in Thailand. They welcomed the opening of the ‘Pakistan Corner’ at Thammasat University in Bangkok in June 2013.” Currently, 77 students from Pakistan are studying at AIT. Students from Pakistan form the fifth-largest student cohort after Thailand, Vietnam, Myanmar and Nepal.

The agreement is aimed at fostering collaboration in geoscience research and increasing capability of personnel in relevant institutions in CCOP member countries in the fields of policy development, planning, management and technology of geosciences. Dr. Adichat, was accompanied by Dr. Nguyen Ngoc. Regional Expert, CCOP Technical Secretariat.

Audience at the DPMM seminar. Prof. Worsak Kanok-Nukulchai with students of JIS group.

Thirty-five students from five colleges belonging to India’s JIS group of institutions participated in the fortnight-long summer training program organized at AIT. The program, which began on 22 July 2013, ended with a gala cultural performance on 2 August 2013, where visiting students displayed their talent.

Five students from the Disaster Preparedness Mitigation and Management (DPMM) field of study shared their experience about the impact of the 2011 Great East Japan Earthquake and Tsunami, and Coastal Disaster Management based on their study trips to Japan. These students were associated with the Disaster Resilient Countries (DRC) and Intensive Programme on Sustainability (IPoS) programs.

How much is a degree really worth? Graduates, on average, earn around £200,000 more over a lifetime than non-graduates – taking into account all the costs involved of being a 21st-century student, says the Guardian. Best estimates suggest on average increase in earnings of 28% for men (approximately £168,000) and 53% for women (around £252,000), it says. Read more at this link: http://goo.gl/rLe8Uq This follows a Business, Innovations and Skills (BIS) Research Paper released in UK titled “University degrees: impact on lifecycle of earnings.” The paper can be downloaded from this link: http://goo.gl/SigqCO

September 2013 edition of the monthly newsletter of the Asian Institute of Technology (AIT).

September 2013 edition of the monthly newsletter of the Asian Institute of Technology (AIT).