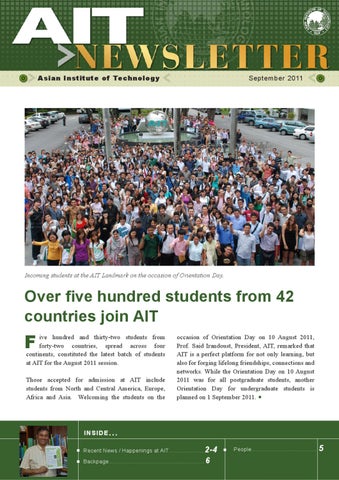 Incoming students at the AIT Landmark on the occasion of Orientation Day.

ive hundred and thirty-two students from forty-two countries, spread across four continents, constituted the latest batch of students at AIT for the August 2011 session. Those accepted for admission at AIT include students from North and Central America, Europe, Africa and Asia. Welcoming the students on the

The Minister, while interacting with the AIT President Prof. Said Irandoust, remarked that his Government is actively considering a request for financial support to AIT. He added that the Government of Sri Lanka is working on the issue of allotment of land to AIT, and a formal agreement would emerge very soon.

AIT has partnered with the Metropolitan Waterworks Authority (MWA) of Thailand in launching a Professional Master’s Degree Program in Water Technology and Management (PM-WTM).

AIT has entered into a Memorandum of Understanding (MOU) with India’s TERI University which opens up possibilities for cooperation in a range of academics and research. The MOU was signed on 4 August 2011 by AIT President Said Irandoust and Dr. Rajendra K. Pachauri, Chancellor, TERI University and co-winner of the 2007 Nobel Peace Prize.

A Memorandum of Agreement (MoA) for the new professional program to begin this year was signed by Prof. Said Irandoust, President, AIT, and Mr. Charoen Passara, MWA Governor, on 17 August 2011 at the MWA headquarters in Bangkok. Through the agreement, MWA will coordinate with the Royal Thai Government (RTG) and Thailand International Development Cooperation Agency (TICA) to secure at least 15 Professional Master’s scholarships over a period of five years from 2011-2016.

Dr. Rajendra K. Pachauri (left) with Prof. Said Irandoust. The signing was made in conjunction with the opening ceremony of the Fourth International Conference on HealthGIS 2011, which took place in New Delhi, India on 4-6 August. The AIT President was a guest of honor for the conference and delivered the inaugural address. TERI University’s Head of Department of Natural Resources Dr. P.K. Joshi and AIT’s Dr. Nitin K. Tripathi joined to organize the event which attracted over 300 participants.

Deputy Secretary General, Office of the Civil Service Commission (OCSC); Dr. Chaiya Yimvilai, Director for Good Governance Promotion; Dr. Suchit Bunbongkarn, President, Political Development Council; and Ms. Somsook Boonyabancha, Founder of Community Organizations Development Institute (CODI). According to Mr. Voravate Chonlasin, Head, Public Sector Capacity Building Unit, AIT Extension, the program was a part of the Regional Exposure Visit (REV) under the program called “Managing at the Top 2” (MATT2) initiated by the Department for International Development (DFID), UK, and the Ministry of Public Administration, Bangladesh, for senior civil servants from Bangladesh. Forty six senior civil service administrators from Bangladesh attended the two week training program. in the “massification of education” since public funding is not able to match the demands for higher education. He remarked that in the 1960s, only seven per cent of the student age group was enrolled in higher education in the United Kingdom, whereas the percentage has grown to 45 per cent today. He added that there is a growing realization that one of the key elements in global economic competitiveness is the quality of human resources. Higher education is a major driver of the knowledge economy, both by producing knowledge and by producing skilled graduates that use that knowledge, Sir Newby said.

Simon Fraser University dean returns to alma mater, discusses partnership AIT alumnus Dr. Nimal Rajapakse (M.Eng.’81) and (Ph.D. ’83), who is now Dean of the Faculty of Applied Sciences at Canada’s Simon Fraser University (SFU), has expressed interest in a possible academic tie-up with his alma mater. During his visit to AIT on 18 August 2011, Prof. Rajapakse was welcomed back to the campus by Prof. Worsak Kanok-Nukulchai, Vice President for Resources and Development, who was also a former professor of the Canadian academic. Later, Prof. Rajapakse was escorted by Prof. Joydeep Dutta, Vice President for Academic Affairs on a tour of AIT’s Center of Excellence in Nanotechnology. Topping the dean’s list of interest were Master’s level student exchange programs in the fields of Computer Science, Mechatron-

ICRIER seeks to connect India to Thailand A delegation of the Indian Council for Research on International Economic Relation (ICRIER) visited AIT on 11 August 2011, and sought AIT’s opinion on helping India and Thailand connect each other in a more productive manner.

Led by Prof. Arpita Mukherjee, the ICRIER team sought to know more about AIT’s association with the Government of India and other Indian partners. Prof. Mukherjee welcomed AIT’s suggestions on how the two countries could extend their financial partnership, which could contribute towards a planned ICRIER report on “Services Market Access Priorities with Thailand and Indonesia.” The ICRIER delegation was also interested in ascertaining the fields where the Government of India could facilitate cooperation with Thailand and AIT. The ICRIER delegation included Research Associates Ms. Tanu Goyal and Ms. Ramneet Goswami.

AIT and Birla Institute of Management Technology (BIMTECH), India have signed a Memorandum of Understanding (MoU) to strengthen their partnership in the fields of student exchange, joint teaching activities and industry training.

Heriot-Watt University for partnership with AIT

nationality is always considered favorably in the European Union, particularly in the Erasmus programs,” he said. Prof. Ogunlana also suggested joint submission of proposals between Heriot-Watt and AIT.

Former faculty member of AIT, Prof. Stephen O. Ogunlana, has proposed a partnership between the Heriot-Watt University, Scotland, and AIT. He proposed collaborative research work, joint doctoral programs and student exchange, besides joint teaching of courses, during a visit to AIT on 26 August 2011. Prof. Ogunlana, who is currently Chair of Construction Project Management at Heriot-Watt University, remarked that the trend in Europe is to increase internationality in all aspects of education. “Anything that brings greater inter-

The MoU was signed by AIT President Prof. Said Irandoust and Director, BIMTECH, Dr. H Chaturvedi on 19 August 2011 in Delhi. The MoU was signed in the presence of the Ambassador of The Kingdom of Thailand to India, H.E. Mr. Pisan Manawapat, and H.E. Dr. Tej Bunnag, Former Foreign Minister of Thailand and Chairman, AIT Board of Trustees. Dr. Tej appreciated the efforts “to expand the knowledge base in the South Asian region in the fields of management and sustainable development areas, through research, collaborative programs and capacity building.” Ambassador Pisan congratulated both partners and offered all the support of the embassy in developing joint activities.

AIT Professor publishes book with Nobel laureate A faculty member of AIT, Prof. Ganesh P. Shivakoti, has co-authored a book with Nobel laureate Ms. Elinor Ostrom, winner of the 2009 Nobel prize in Economics. The book, titled “Improving Irrigation in Asia,” which has just been released by Edward Elgar publishing, is based on a two-decade long study on innovative interventions for sustained performance of irrigation systems. The book, identifies key factors that help explain the performance of interventions, apart from enumerating lessons for resource management and development assistance. Speaking about the publication, Prof. Shivakoti of AIT’s School of Environment, Development and Resources (SERD), stated that for achieving a sustainable improvement in performance, it is the farmers themselves who need to engage in collective action. “There is need to support local entrepreneurs who provide leadership and stimulate adjustments to change,” he said.

Prof. Ranjith Premalal de Silva, a AIT alumnus, has been appointed the new Vice Chancellor of Uva Wellassa University in Sri Lanka. He will be the second Vice Chancellor of Uva Wellassa University, and he would replace Prof. Chandra Embuldeniya. He graduated with a Master’s in Science in Natural Resources Development and Management from AIT in 1990.

Ms. Juliette François has joined the Language Center at AIT, where she will be delivering French courses. She earned a degree in English from France, and has worked as a French teacher in Princethorpe College in England for two years. She has also taught in Portland, Oregon (USA) and Halifax in Canada while working at Alliance Française. She shall be at AIT for a period of nine months beginning August 2011.

A letter from India thanks the AIT President A letter from India, written by a student who participated in a summer training program, describes her experience at the Asian Institute of Technology (AIT) as the “most memorable and knowledgeable program ever.”

In a letter written to the AIT President, Prof. Said Irandoust, the second year student of Master’s in Business Administration (MBA), Ms. Shivangi Srivastava of the United Group of Institutes (India), remarked that AIT truly lives up to its slogan of “Learning beyond boundaries.” Students and AIT employees are from different parts of the world, and this makes AIT a truly different campus, she adds. The letter also highlights the plush green campus of the Institute.

Why do 60% of students find their lectures boring?

Details at this link:

A newly published study of student boredom suggests that almost 60 per cent of students find at least half their lectures boring - with about 30 per cent claiming to find most or all of their lectures boring. One of the main contributors to student boredom is the use of PowerPoint...writes Dr Sandi Mann in The Guardian. Dr. Mann is a senior lecturer in occupational psychology at the University of Central Lancashire. Read the entire story at this link. http://www.guardian.co.uk/education/2009/may/12/university-teaching To tackle this, you can either indulge in role play (http://minnesota. publicradio.org/display/web/2010/07/15/new-teaching-methods/) or follow Truman State University which provides 10 tips to listen to boring lectures. http://tiny.cc/9hceq Follow AIT at • Facebook • Twitter • Youtube