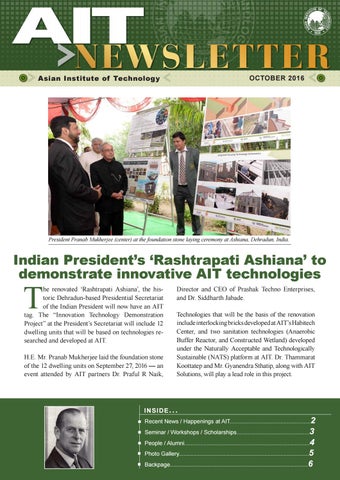 he renovated ‘Rashtrapati Ashiana’, the historic Dehradun-based Presidential Secretariat of the Indian President will now have an AIT tag. The “Innovation Technology Demonstration Project” at the President’s Secretariat will include 12 dwelling units that will be based on technologies researched and developed at AIT. H.E. Mr. Pranab Mukherjee laid the foundation stone of the 12 dwelling units on September 27, 2016 — an event attended by AIT partners Dr. Praful R Naik,

Director and CEO of Prashak Techno Enterprises, and Dr. Siddharth Jabade. Technologies that will be the basis of the renovation include interlocking bricks developed at AIT’s Habitech Center, and two sanitation technologies (Anaerobic Buffer Reactor, and Constructed Wetland) developed under the Naturally Acceptable and Technologically Sustainable (NATS) platform at AIT. Dr. Thammarat Koottatep and Mr. Gyanendra Sthatip, along with AIT Solutions, will play a lead role in this project.

ADB officials interact with scholarship recipients A delegation of two officials of the Asian Development Bank (ADB) visited ​AIT on 8 September 2016, and interacted with senior officials of the AIT administration as well as scholarship recipients. Leading the delegation, Mr. Masashi Tanabe, Alternate Executive Director for Japan, ADB, said that he was keen to know more about the progress of the Asian Development Bank-Japan Scholarship Program (ADB-JSP) scholarship program. “We would like to meet the students and obtain their feedback,” Tanabe said. ​ e was accompanied by ​Mr. Tatsuya Kanai, Advisor, Office H of Cofinancing Operations (OCO), ADB​. ​Welcoming them

​ IT to help enhance capacity building under World Bank’s Sindh A Barrages Improvement Project AIT has signed a Memorandum of Understanding (MoU) with the Irrigation Department, Sindh, Pakistan to establish a framework of cooperation

AIT and UNU sign WEMS licensing agreement AIT and United Nations University (UNU) have signed a formal licensing agreement Screenshot of WEMS software. for implementation of a project that assists in monitoring of wildlife trafficking and illegal wildlife crime. Licensing rights for the software platform, “Wildlife Enforcement Monitoring System” (WEMS) have been granted to AIT on a non-transferable, royalty-free basis. The agreement, signed by UNU Vice-Rector and Executive Officer Mr. Max Bond, and AIT President Prof. Worsak Kanok-Nukulchai, seeks to bring together national enforcement institutions to a common data and reporting mechanism. This shall be an important component of the WEMS-Asia Secretariat at AIT under the aegis of AIT Solutions.

under the World-Bank funded Sindh Barrages Improvement Project (SBIP). The MoU was signed by Prof. Worsak Kanok-Nukulchai, President, AIT, and Mr Aijaz Shaikh, Project Director, SBIP, Sindh Irrigation Department, on 26 September 2016. The agreement will address five aspects of capacity building including technical assistance, project management and procurement, finance and administration, environment, and communication and social development. Mr. Aijaz Shaikh, Project Director, SBIP, stated that the overall objective of the five-year project is to improve the reliability and safety of the Guddu barrage and strengthen the capacity of the Sindh Irrigation Department to operate and manage the barrage.

The decision was taken by the Board of Directors of the Siam Cement Public Company Limited, and it shall be effective from 1 January 2017.

He has been serving as Executive Vice President at SCG Building Materials Co., Ltd. since July 2012. Mr. Chavalitcheewingul received Bachelor of Engineering (Electrical, Honors) from Chiang Mai University (CMU) in 1985, Master of Engineering in Industrial Engineering and Management from AIT in 1992, and Advanced Management Program (AMP) from Harvard Business School (2011).

Dr. Prabhat Kumar, Director of the Asian Center of Innovation for Sustainable Agriculture Intensification (ACISAI) and Regional Coordinator of SRI-EC Project, passed away on 17 September 2016, at a hospital in Hyderabad, India.

AIT alumna Ms. Kamini Rajbhandari has been appointed as the new Managing Director of the state-owned telecom enterprise, Nepal Telecom. Her appointment was announced following a meeting of the Nepal Council of Ministers held on 22 September 2016. The first woman to hold this position, she was earlier serving as Chief Technical Officer (CTO) in the same company.

She was also awarded “Outstanding Woman Engineers’ Award” by the Nepal Engineers Association (NEA) on the occasion of Engineers Day. A graduate of Punjab Engineering College, Chandigarh, India (Electronics and Electrical Engineering, 1985); she completed her Master’s from AIT (Management of Technology, 2001).

An AIT alumnus (Agricultural Systems,1996), he served as a Research Associate in Agricultural Systems Engineering (ASE) in 1996-1997, and left AIT to pursue his doctoral degree in Germany. He returned to AIT in 2006 to serve as a Research Specialist and became the Director of ACISAI in 2013. He is survived by his wife, Dr. Abha Mishra and two daughters, Tanvi and Vagisha. A condolence meeting was held in his memory at AIT on 23 September 2016.

From our November 1991 archives

October 2016 edition of the monthly Newsletter of the Asian Institute of Technology (AIT).

October 2016 edition of the monthly Newsletter of the Asian Institute of Technology (AIT).