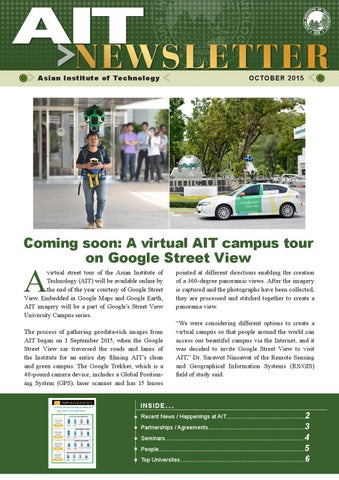 virtual street tour of the Asian Institute of Technology (AIT) will be available online by the end of the year courtesy of Google Street View. Embedded in Google Maps and Google Earth, AIT imagery will be a part of Google’s Street View University Campus series. The process of gathering geodata-rich images from AIT began on 1 September 2015, when the Google Street View car traversed the roads and lanes of the Institute for an entire day filming AIT’s clean and green campus. The Google Trekker, which is a 40-pound camera device, includes a Global Positioning System (GPS), laser scanner and has 15 lenses

pointed at different directions enabling the creation of a 360-degree panoramic views. After the imagery is captured and the photographs have been collected, they are processed and stitched together to create a panorama view. “We were considering different options to create a virtual campus so that people around the world can access our beautiful campus via the Internet, and it was decided to invite Google Street View to visit AIT,” Dr. Sarawut Ninsawat of the Remote Sensing and Geographical Information Systems (RS/GIS) field of study said.

Nepal Ambassador to Thailand calls for increased ties with AIT Nepal’s ambassador to Thailand, H.E. Mr. Khaga Nath Adhikari, visited AIT on 29 September to discuss ways for advancing a stronger, mutually beneficial relationship between his country and the international institute. Keen to understand AIT’s activities after assuming his diplomatic mission in January this year, Ambassador Adhikari held meetings with the AIT president, as well as Nepalese faculty members and students. Calling on AIT President Prof. Worsak Kanok-Nukulchai at a meeting also attended by AIT Board of Trustee member Mr. Noritada Morita and senior administration officials, the ambassador expressed his thanks on behalf of the embassy and the people of Nepal for AIT’s financial, technical and humanitarian response to the April 2015 earthquake disaster.

Course director, Mr. Voravate Chonlasin of AIT Extension, stated that the course covered the complexities of aviation ground operations commonly referred to as ‘ground handling’. The program was initiated through a partnership between SPS Global and AIT, and it was jointly organized with external experts from TWIGA AERO Aviation Training and Consulting.

CDTI’s Chief Representative for India and Southeast Asia, Mr. Adrián Gutierrez, who visited AIT on 14 September 2015, spoke about the bilateral framework for providing financial support for collaborative R&D ventures. AIT’s Prof. Kanchana Kanchanasut, Vice President for Research, spoke about how AIT was addressing the needs of the region. AIT is supportive of innovation and is considering establishing a dedicated unit which will focus on linking research and innovation with the business sector, Prof. Kanchana added.

MoU for Partnership with MCCi, Myanmar A Memorandum of Understanding (MoU) signed between AIT and the MCC Training Institute (MCCi) in Myanmar could see the existing partnership strengthened to include academics, joint promotional activities, short-term training programs and faculty development activities. “We are looking forward to a new level of cooperation,” said AIT President Worsak Kanok-Nukulchai, signing the agreement with MCCi Chairman Mr. Tin Win Aung on 9 September 2015 at AIT. The president said he would like to see AIT engineering faculty members contribute to the development of a graduate level engineering curriculum at MCCi. More-

Assam Don Bosco University signs Agreement on Unified Program Assam Don Bosco University (ADBU) has signed a Memorandum of Agreement (MoA) with AIT for launch- Dr. Stephen Mavely. ing a Unified Bachelor-Master Degree Program. The MoA was signed by Dr. Stephen Mavely, Vice Chancellor of ADBU, and Prof. Worsak Kanok-Nukulchai, President of AIT on 21 September 2015. Signing the MoA, Dr. Stephen Mavely stated that besides this agreement, they would also like to initiate a collaboration in other programs, including student exchange. Prof. Worsak mentioned the close ties of Thailand with the Indian province of Assam, stating that historic cultural linkages provide a good basis for expansion of educational ties. He also thanked AIT alumnus Dr. Sunandan Baruah, for initiating the partnership. Prof. Nitin Kumar Tripathi, Director, Special Degree Programs (SDP), added that North East region of India is a key area for AIT, and the Institute regularly receives students from Assam and neighboring states.

over, as MCCi is expanding its academic operations in Myanmar, MCCi staff and faculty could also be sent to Prof. Worsak Kanok-Nukulchai (left) AIT to elevate with Mr. Tin Win Aung. their academic qualifications, such as attaining doctorate degrees, President Worsak added.

Examining the Lessons Learnt from Fifty Years in the WaterBox Mainstreaming water management into economic, social and environmental sustainability objectives is a key challenge that water professionals will face in the coming

years. The target is to balance costs and benefits of national water assets in our socio-economic environment. Highlighting 50 years of developments in the water sector was Dr. Mogens Dyhr-Nielsen, who delivered the Second AIT Distinguished Adjunct Faculty (DAF) Seminar on 22 September 2015. Dr. Mogens, who served as Associate Professor of Hydrology and Water Resources as a seconded faculty member at AIT from 198486, strongly advocated the creation of what he called a 'Ministry of Water Assets' that could ensure a synchronisation of development objectives with management issues. Policy, institutions and instruments have to work towards achieving social, economic and sustainable objectives, he said. Dr. Mogens was introduced by Dr. Apichart Anukularmphai, President of the Thailand Water Resources Association and Member of the AIT Executive Committee.

try. These were some of the thoughts shared by Mr. Franck Fougere, Managing Director, Ananda Intellectual Property Ltd., who delivered a talk on “Intellectual Property Strategies and Sharing of Best Practices” at AIT on 7 September 2015. Speaking on IP strategies for universities, Franck remarked that 80 per cent of IP is about strategy and it clearly overrides legal issues. He highlighted the dilemma of researchers who want to publish their research results vis-á-vis getting a patent for their work. Dr. Orakanoke Phanraksa, Manager, Intellectual Property Policy Group,Technology Management Center, National Science and Technology Development Agency (NSTDA), and Chalalai Sutton, Licensing Consultant, NSTDA also spoke on the occasion.

Evaluating the Success of the Developmental State in Asia The developmental state has been successful in Asia because of its careful intervention in the economy and on account of its policy of promoting growth with equity.

However, can this lead to the emergence of more developmental states? Is China moving towards being a developmental state? These issues were raised by Dr. Trevor Parfitt of the University of Nottingham, Malaysia, while delivering a talk on “Neo-Liberalism or the State” on 15 September 2015 at AIT. Dr. Trevor reasoned that the East Asian experience counters the neoliberal assertion that policy efforts in social protection hinder economic growth in developing countries. In Asia, many states undertook successful development strategies, including the famous “Four Tigers” namely Taiwan, Hong Kong, South Korea and Singapore. Similarly Malaysia and Thailand also achieved a measure of success in creating conditions for economic growth.

Dr. Harsha Abeykoon joins AIT Dr. Harsha Abeykoon has joined the Mechatronics field of study at AIT’s School Dr. Harsha of Engineering Abeykoon and Technology (SET) as Assistant Professor. Dr Harsha received his B.Sc (Honours) in Electrical Engineering from the Department of Electrical Engineering, Faculty of Engineering, University of Moratuwa in 2002. He completed his Master’s in Science (2005) in the field of mobile robotics and his doctorate (2009) from Keio University, Yokohama, Japan, specializing in bilateral control for robot assisted surgery.

Dr. Nicolas Faysse joins AIT Dr. Nicolas Faysse has joined the School of Environment, Resources and Dr. Nicolas Faysse Development (SERD) at AIT as Visiting Associate Professor. Dr. Nicolas received his Bachelor’s degree from École Polytechnique with specialization in Physics and Biology, and his Master’s degree in Agricultural and Environmental Engineering from Ecole Nationale de Genie Rural, des Eaux et Forets, French Institute of Forestry. He completed his doctorate in Economics from the University of Paris X Nanterre, France. He works as a Researcher in Water Management Research Unit (CIRAD), and has been seconded for two years to AIT.

APPOINTMENT OF SENIOR ADVISORS TO AIT PRESIDENT Dr. Hiroyuki Konuma Dr. Hiroyuki Konuma served as Assistant DirectorGeneral and the Regional Representative for Asia and the Pacific, Food and Agriculture Organization (FAO), where he served for 30 years until July 2015. A Japanese national, he is a graduate of Meiji University and holds an M.Sc. and PhD degree in Agricultural Science from Tsukuba University in Japan. Dr. Konuma will offer advice in one of the Institute’s thematic areas, i.e., Food and Agriculture, in assessing the existing structure at AIT involved in food and agriculture areas; identifying gaps and providing recommendations so as to position AIT in the area as a regional leader; forging linkages with international, regional institutions, and countries in the Asia Pacific region; and providing linkages with the private sector and development agencies on food issues. Prof. Ioan D. Marinescu Prof. Ioan D. Marinescu is currently serving as Professor in the Department of Mechanical, Industrial and Manufacturing Engineering and Director of Precision MicroMachining Center (PMMC) at The University of Toledo, Ohio, USA. He received his undergraduate degree in Manufacturing Engineering/Industrial Engineering and his M.S. degree in Mechanical Engineering from Polytechnic Institute of Bucharest, Romania, and his Ph.D. in Manufacturing Engineering from the University of Galatzi, Romania. He was a postdoctoral associate at Massachusetts Institute of Technology (MIT). From January-August 2004, he served as Fulbright Fellow and Visiting Professor at AIT. He will assist AIT in initiating accreditation with the Accreditation Board for Engineering and Technology (ABET), and he will teach courses in the School of Management. Dr. Bindu N. Lohani Dr. Bindu N. Lohani served the Asian Development Bank in various capacities, including Vice-President (Knowledge Management and Sustainable Development), and Vice-President (Finance and Administration). He has served as Associate Professor and Division Chairman of the Environmental Engineering Program at AIT. He received a Bachelor’s degree from the Birla Institute of Technology and Science (India), a Masters degree in Civil Engineering from the North Carolina State University (USA), and his Doctoral degree in Environmental Engineering (Environmental Technology and Management) from AIT. Dr. Lohani will assist AIT in initiating a Regional Training Center for preparing investment projects for climate change, contributing his expertise in the area for bringing scholarships and projects to AIT.

October 2015 edition of the monthly newsletter of the Asian Institute of Technology (AIT).

October 2015 edition of the monthly newsletter of the Asian Institute of Technology (AIT).