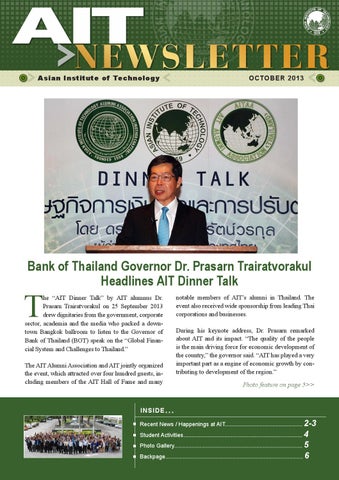 he “AIT Dinner Talk” by AIT alumnus Dr. Prasarn Trairatvorakul on 25 September 2013 drew dignitaries from the government, corporate sector, academia and the media who packed a downtown Bangkok ballroom to listen to the Governor of Bank of Thailand (BOT) speak on the “Global Financial System and Challenges to Thailand.” The AIT Alumni Association and AIT jointly organized the event, which attracted over four hundred guests, including members of the AIT Hall of Fame and many

notable members of AIT’s alumni in Thailand. The event also received wide sponsorship from leading Thai corporations and businesses. During his keynote address, Dr. Prasarn remarked about AIT and its impact. “The quality of the people is the main driving force for economic development of the country,” the governor said. “AIT has played a very important part as a engine of economic growth by contributing to development of the region.” Photo feature on page 5>>

Thai PM Yingluck Shinawatra visits AIT Exoskeleton Exhibit at Thailand Innovation and Trade Expo 2013 A pair of AIT robotic exoskeletons displayed at the Thailand Innovation and Trade Expo 2013 caught the eye Thailand Prime Minister Yingluck Shinawatra, who stopped by the AIT exhibit while touring the exposition held at BITEC Bangna in Bangkok on September 25-29. The PM studied and asked about the “Walking Rehabilitation Machine” and the “Power Suit” developed by Mechatronics field of study Associate Prof. Manukid Parnichkun and his graduate students. AIT Vice President for Research Prof. Kanchana Kanchanasut (pictured) briefed Prime Minister Yingluck, who expressed interest in the technology during her brief stop at the front of the AIT display.

Prof. Worsak Kanok-Nukulchai (right) with the NITT delegation. Participants at the YRS program.

Fifteen PhD students from across the Asia-Pacific region arrived at AIT on 10 September 2013 for one day of lectures as part of a 12-day summer academic exposure program called the Young Researchers’ School (YSR) held under the Promotion for Sustainability in Postgraduate Education and Research (ProSPER.Net) program.YRS is co-organized by AIT and Thailand’s Chulalongkorn University and Prince of Songkla University. Under this year’s theme of “Partnerships in Water and Biodiversity for Sustainable Development,” the doctoral students from Thailand, India, Australia, China, Myanmar and Japan are spending close to a fortnight in the country gaining actionable knowledge, while developing research skills and professional networks with other students, academics and leading experts.

National Institute of Technology, Tiruchirappalli (NITT), Tamil Nadu and AIT have signed a Memorandum of Understanding (MoU) for promoting collaborative academic and research activities. AIT Interim President Prof. Worsak Kanok-Nukulchai signed the MoU on 3 September 2013 in the presence of delegation from NITT. The MoU seeks to enable cooperation between AIT and NITT in pursuit of common interests in teaching, training and research. Besides facilitating interaction between the two institutions, the collaboration aims to foster advancement in teaching, training, research and expertise exchange. A delegation of NITT comprising of Dr. K R Balasubramanian, Dr. S Suresh, Dr. V Mariappan, and Dr. S P Sivapirakasam of the Department of Mechanical Engineering visited AIT on 3 September 2013.

AIT ‘V-Watch’ showcased at NSTDA Investors’ Day 2013 An advanced electronic monitoring device developed by Dr. Mongkol Ekpanyapong of SET was one of five

technologies presented by Thailand’s National Science and Technology Development Agency (NSTDA) at a national-level exhibition targeting investors. AIT’s Vehicle Watch System (V-Watch), an intelligent, automated car-watching system, was chosen for the multiple applications it offers investors. It can report online and in real-time. Dr. Mongkol’s creation is funded by NSTDA and is considered a joint technology with AIT. Each partner shares the intellectual property (IP) and patent rights.

AIT Cricket Team reaches finals of Thailand Cricket League ‘A’ division The AIT cricket team has reached the finals of the ‘A’ division of the Thailand Cricket League. The finals will be played on 13 October 2013. “The AIT team topped the league in the round robin and has now reached the finals,” Mr. Hadi Hassan Khan, the team captain said. He added that the AIT Cricket Team is one of the top three teams in Thailand and had won the ‘A’ division in 2010-2011. During this season, the only century scorer in the ‘A’ division was an AIT student, Mr. Babrak Ali Panezai. He also maintains the highest batting average in the league; while during the last season, his score of 94 not out was the highest score.

Another AIT player Mr. Muhammad Shafiq has won four “Man of the Match” awards this season.

155 students from six countries attend Orientation Program One hundred and fifty-five students hailing from six countries attended the Orientation Program for undergraduate classes at AIT on 2 September 2013. Welcoming the students, Vice President for Academic Affairs (VPAA) Prof. Sivanappan Kumar stated that the new batch joins the over 400 students who have enrolled in AIT in August 2013 in postgraduate and doctoral programs.

On 14 September 2013, over 600 new and current students headed to a popular amusement park in suburban Bangkok. On arrival, AIT’s big presence was immediately felt as the SU Leisure Committee choreographed a memorable group “Welcome photo.” Students delighted in the exhibits and thrilling rides, which was followed by a special AIT buffet. In the afternoon, students were invited to experience the feeling of -1 degree Celsius cold and artificial snow while wearing a mandatory pair of boots and warm jacket provided by the attendants. Also popular with AIT students was the “4-D” theater and the ever popular roller coasters. The SU Welcome Trip is intended for students to get to know each other and for newcomers to mingle with their AIT seniors.

The 155 students come from Sri Lanka, Myanmar, Bhutan, India, Japan and Thailand. Out of them, 114 have already completed their first two years at the South Asian Institute of Medicine (SAITM), Sri Lanka, and they will attend the third year of their undergraduate program at AIT. Another 30 students come from Myanmar Computer Company (MCCi), Myanmar. One exchange student is joining from Japan. A quarter of the incoming students are female.

European resurgence Switzerland is leading a “period of resurgence” for universities in Continental Europe, in the QS World Uni-