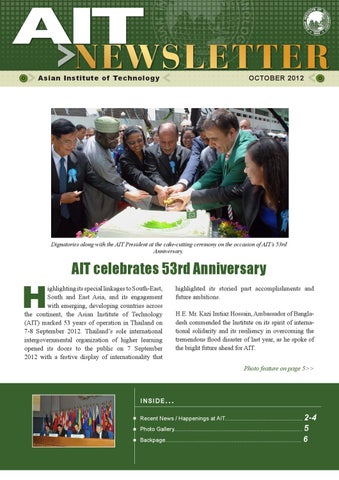 Dignatories along with the AIT President at the cake-cutting ceremony on the occasion of AITâ&#x20AC;&#x2122;s 53rd Anniversary.

ighlighting its special linkages to South-East, South and East Asia, and its engagement with emerging, developing countries across the continent, the Asian Institute of Technology (AIT) marked 53 years of operation in Thailand on 7-8 September 2012. Thailandâ&#x20AC;&#x2122;s sole international intergovernmental organization of higher learning opened its doors to the public on 7 September 2012 with a festive display of internationality that

highlighted its storied past accomplishments and future ambitions. H.E. Mr. Kazi Imtiaz Hossain, Ambassador of Bangladesh commended the Institute on its spirit of international solidarity and its resiliency in overcoming the tremendous flood disaster of last year, as he spoke of the bright future ahead for AIT. Photo feature on page 5>>

The Kingdom of Cambodia has ratified the new Charter of AIT and will become a member of the Governing Council of Intergovernmental AIT. Cambodia deposited the Instrument of Acceptance to the AIT Charter with the Royal Thai Government on 3 September 2012, the Institute was informed in a diplomatic note from the Ministry of Foreign Affairs, Thailand. Cambodia will become the ninth member of the AIT Council and second member from the Southeast Asian region. AIT Council membership currently includes Bangladesh, India, Japan, Nepal, Pakistan, Sri Lanka, Sweden and Vietnam.“AIT is delighted that the Government of Cambodia has joined our governing body,” AIT President Prof. Said Irandoust said. “It is significant that the AIT Council will soon have two countries from the region in which AIT is based.”

APMUN - where people enter as junior delegates, and leave as diplomats For 350 young college and university students, many of whom entered the portals of a United Nations building for the first time, it was a dream come true. For them to act as representatives of various countries, debate and deliberate like them and finally vote on important motions, was a once-in-a-lifetime experience. As Mr. Shun-ichi Murata, Deputy Executive Secretary, ESCAP pointed out that participants “enter as junior delegates but leave as ambassadors.”

Students from 46 countries pose at the UNESCAP headquarters.

In the precincts of the United Nations Economic and Social Commission for Asia and the Pacific (ESCAP) in Bangkok, student representatives from 46 countries assembled to participate in the Asia-Pacific International Model United Nations (APMUN) event. At the inaugural on 20 September 2012, Prof. Said Irandoust, AIT President stated that AIT is proud and honored to have taken the lead in creating the first Asia-Pacific International Model United Nations Conference at the University level. From left: Mr. Shun-ichi Murata, Prof. Said Irandoust, Mr. Abramo A. Chabib, and Mr. Hiroyuki Konuma.

AIT welcomes its newest undergraduates One hundred and fourteen undergraduates from six countries joined AIT officially at its Orientation held on 3 September 2012. This year’s newest freshmen hailed from Bhutan, India, Myanmar, Sri Lanka, Thailand and Nepal. A large number arrived from two prominent partner institutions, with 78 entering AIT from Sri Lanka’s South Asian Institute of Technology and Medicine (SAITM) and 16 coming from the MCC Training Institute in Myanmar. In a warm gesture, Prof. I. M. Pandey, Vice President - Academic Affairs, opened the orientation program by encouraging the new students to smile at their peers as after all Thailand is known as the “Land of Smiles”.

Undergraduate students at the orientation program.

Gates Foundation research grant to AIT for ‘Reinventing the Toilet’

A team of scientists at AIT in Thailand are set to reinvent the toilet in three developing countries in Asia. In a bid to find sustainable solutions to the current sanitation problems faced by the urban poor – not just in Thailand, but also in Cambodia and Vietnam – the researchers have embarked on a five-year project made possible by a US $5-million (150-million Baht) grant from the Bill & Melinda Gates Foundation in the United States. AIT was one of 61 grant recipients from the Gates Foundation’s Water, Sanitation, & Hygiene Team in 2011. The Environmental Engineering and Management field of study at AIT’s School of Environment, Resources and Development is the new project holder for the field research project on “Sustainable Decentralized Wastewater Management Systems” lasting from 2012–2017. Led by Dr. Thammarat Koottatep of AIT, the project was launched at a function on 24 September 2012 in the presence of Dr. Doulaye Kone, Senior Program Officer, Bill & Melinda Gates Foundation, and other advisory panel members.

US Embassy official visits AIT, Myanmar outreach and LMI discussed America’s Lower Mekong Initiative (LMI) and outreach with Myanmar are priorities for the United States Department of State in

AIT hosts global Technology Needs Assessment (TNA) project meeting To address the climate change challenge, AIT hosted the globallevel Technology Needs Assessment (TNA) Project’s “Experience Sharing Workshop” as the Asia-CIS Region Lead Organization. Funded by United Nations Environment Programme (UNEP) and the Global Environment Facility (GEF), the event held on 10-12 September 2012 in Bangkok was jointly organized by the UNEP Risø Centre in collaboration with United Nations Climate Change Secretariat. The TNA Project is implemented by UNEP on behalf of the GEF. It supports developing countries in identifying national priorities for both adaptation and mitigation, with strong focus on technology. Now nearing its final phase, national Technology Action Plans (TAP), which are developed out of the TNA

AIT alumna made Thailand’s Permanent Secretary for Education An alumna of AIT, Ms. Panita Kambhu Na Ayutthaya, has been appointed Permanent Secretary in the Ministry of Education, Royal Thai Government. Ms. Panita graduated from AIT in 1986 with a M.Sc. in Human Settlements and Development from the School of Environment, Resources and Development (SERD). She studied Archaeology in her Bachelor’s degree from Silpakorn University, graduating in 1977. She also attended the National Defence College of Thailand in 2004. Ms. Panita Kambhu Na Ayutthaya

Her appointment as Permanent Secretary for Education was approved by the cabinet of the Royal Thai Government and the appointment will be effective from 1 October 2012.

A soft-power education institute for an ever-changing region An article by Prof. Said Irandoust, President, Asian Institute of Technology (AIT) was published in the Opinion page of the Thai English daily, The Nation on 7 September 2012. The article states that AIT is very much “Asia’s institute” - albeit imbued with a quintessential Thai imprint. The article can be read at this link: http://www.nationmultimedia.com/opinion/A-soft-power-education-institute-for-an-everchang-30189884.html

SAT reading scores hit a four-decade low The Washington Post reports that “Reading scores on the SAT for the high school class of 2012 reached a four-decade low, putting a punctuation mark on a gradual decline in the ability of college-bound teens to read passages and answer questions about sentence structure, vocabulary and meaning on the college entrance exam.” The Heritage reported that while SAT scores were on a low, education spending was on a high. http://blog.heritage.org/2012/09/25/sat-scores-at-historical-low-education-spending-at-historical-high/