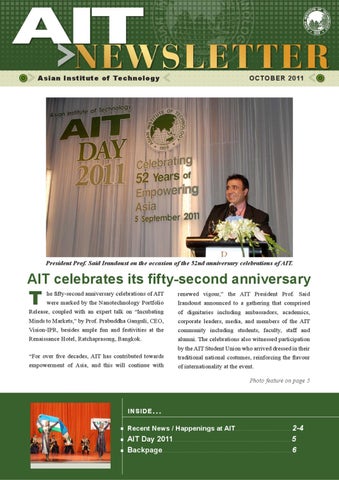 President Prof. Said Irandoust on the occasion of the 52nd anniversary celebrations of AIT.

he fifty-second anniversary celebrations of AIT were marked by the Nanotechnology Portfolio Release, coupled with an expert talk on “Incubating Minds to Markets,” by Prof. Prabuddha Ganguli, CEO, Vision-IPR, besides ample fun and festivities at the Renaissance Hotel, Ratchaprasong, Bangkok. “For over five decades, AIT has contributed towards empowerment of Asia, and this will continue with

renewed vigour,” the AIT President Prof. Said Irandoust announced to a gathering that comprised of dignitaries including ambassadors, academics, corporate leaders, media, and members of the AIT community including students, faculty, staff and alumni. The celebrations also witnessed participation by the AIT Student Union who arrived dressed in their traditional national costumes, reinforcing the flavour of internationality at the event. Photo feature on page 5

contribution towards capacity building in Afghanistan is impressive and sought continuation of the endeavour. Mr. Svanidze stated that UNDP would be very happy to facilitate AIT’s work in Afghanistan.

ADB Country Director (Thailand Resident Mission), Mr. Craig M. Steffensen, assured AIT of “full support,” stating that the Institute could count on ADB as a key supporter. He made these remarks during a visit to AIT on 12 September 2011.

“ADB is very pleased with AIT’s engagement in Vietnam, particularly the training activities in Hanoi,” Mr. Steffenson said. He added that ADB will be willing to associate with AIT in furthering the cause of development in the Mekong Sub Region. The ADB Country Director evinced interest in AIT’s Poverty Reduction and Agricultural Management (PRAM) program. Stating that his personal association with AIT traces back to the time when Prof. Alastair North was the President of the Institute, Mr. Steffensen remarked that AIT’s greatest asset is its alumni.

AIT students receive scholarship certificates from DAAD Twelve students of AIT were felicitated by the Ambassador of Federal Republic of Germany to Thailand, H.E. Mr. Rolf Schulze, at a function held at the Embassy of Germany on 15 September 2011. Recipients of the Germany Academic Exchange Service scholarships, the students are from Vietnam, Cambodia and Myanmar. “I express my sincere thanks and appreciation to the Asian Institute of Technology for ensuring an excellent academic environment for these students,” the

Undergraduate students at the AIT landmark.

AIT Vietnam (AIT-VN) has expanded its facility in Ho Chi Minh City, Vietnam, to meet the rapidly growing demand for its higher learning professional programs and professional development short courses in the nation’s largest city. The new office was unveiled at a ceremony graced by H.E. Dr. Tej Bunnag, Chairman of the Board of Trustees of AIT and former Minister of Foreign Affairs, Thailand, who officially opened the facility. “The sheer growth in the number of programs we offer has required us to increase our number of classrooms and offices,” AITVN director Dr. Amrit Bart said.

Towards creating an innovative economy in Thailand

Thailand is moving towards a path of an innovative economy which encompasses creative, knowledge-based and green economies. The country’s eleventh plan envisions the creation of a happy society based on equality,

composition of AIT’s student body was very attractive. “AIT draws students from all over the region, and from some countries we do not have,” Prof. Hult said, emphasizing the importance of South-East Asia for both KTH and Swedish enterprise.

fairness and resilience. This was stated by Dr. Chonchanok Viravan, Advisor, AMATA Science City Project, while delivering an extramural lecture on “Amata Science City: Creating New Opportunities to Foster Innovative Economy in Thailand” at the Asian Institute of Technology (AIT) on 15 September 2011. She stated that it was important that Thailand should “find ways to keep AIT graduates who want to stay and work here in Thailand.”

ebrations of the independence of the Republic of Uzbekistan. Organized by the Counsulate General of the Republic of Uzbekistan along with AIT, the famous Bukhara troupe from Uzbekistan kept a captive audience at AIT’s Conference Center auditorium spellbound for over an hour. Performing 15 songs from their repertoire, the Bukhara group provided a glimpse of the musical heritage of Uzbekistan, which had reached its zenith in the twelfth and thirteenth centuries. The troupe comprising of seven artists, including two dancers, one vocalist and four instrumentalists mesmerized the audience with songs about nature, peace, love, friendship and the beauty of the Uzbek people.

St. Mary’s U. Finds That When It Texts, Students Come Reports Alex Campbell in the Higher Education Chronicle

A prospective undergraduate named Porsha got a text in January. “StMarysU: R u still interested in StMarys? A complete application includes an official transcript and test scores. Call 800-367-7868 with ?s about ur status.” “My transcript has been sent along with my tests results,” Porsha quickly replied.

“Great!” said the text back, two minutes later. “We should get it soon, and we will be in touch with an admission decision.” For the second straight year, students who signed up were more likely to apply than those who didn’t, and, if they got accepted, they were more likely to matriculate. Read the entire article at this link

October 2011 edition of the monthly newsletter of the Asian Institute of Technology (AIT).

October 2011 edition of the monthly newsletter of the Asian Institute of Technology (AIT).