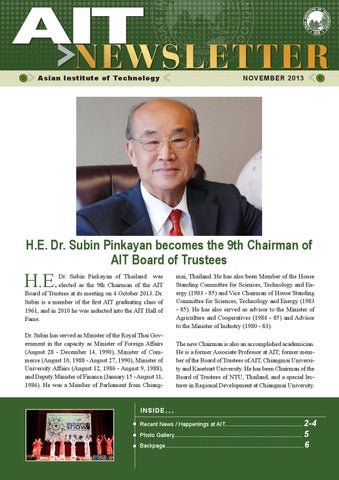 H.E. Dr. Subin Pinkayan becomes the 9th Chairman of AIT Board of Trustees

Sri Lankan students sweep top awards at AIT Welcome Show 2013 Students singing, dancing, acting and strutting under the flag of Sri Lanka swept the first place awards in all five competitive categories at the annual autumn AIT Welcome Show on 18 October 2013. Organized by the AIT Student Union under the theme “Share Similarities, Celebrate Differences”, the eight-hour extravaganza attracted a capacity crowd to the AIT Auditorium. AIT Vice President for Academic Affairs Prof. S. Kumar, who himself participated in the show as an AIT student, delivered the opening remarks. “This show epitomizes the wonderful spirit of our students and AITians. I am happy that this tradition continues,” he said. The performers at the Welcome Show 2013 represented fifteen countries, including: Bangladesh, Bhutan, Cambodia, China, India, Indonesia, Iran,

Sixty participants drawn from among scientists, students, international organizations and the government participated in the two-day expert workshop on “Managing Water Resources under Climate Uncertainty: Challenges and Opportunities” on 17-18 October 2013. The workshop, which was jointly organized by AIT with the Southeast Asia – European Union Network (SEA-EU-NET), discussed issues related to climate change and its impact on the water sector, uncertainties associated with climate prediction and impact assessment, water management under climate variability and uncertainty, and adapting climate change in the water sector. Workshop participants included delegates from five ASEAN countries Thailand, Myanmar, Vietnam, Cambodia and the Philippines, along with scientists from Italy, The Netherlands and the United Kingdom.

AIT and the National Institute of Advanced Industrial Science and Technology, Information Technology Research Institute (ITRI/AIST), Japan, have signed a fiveyear academic and research partnership in the field of information and communications technology (ICT).

A delegation from the Shanghai Jiaotong University (SJTU), China visited AIT on 15 October 2013 and expressed its desire to engage with AIT in joint academic and research programs. SJTU has many famous alumni including former President of the People’s Re-

AIT in 1984, and a PhD in Chemical/Environmental Engineering from Institut du Genie Chimique, Institut National Polytechnique de Toulouse, France, in 1988. He started his teaching career at as an Assistant Professor in Environmental Engineering and Management Program in July 1991. School of Management (SOM): Dr. ‘Donya’ holds a Ph.D. in Telecommunication Technology, Management, and Policy from Massachusetts Institute of Technology (MIT). She received her Master’s Dr. Donyaprueth degree from the University of ColoKrairit rado at Boulder, U.S.A. and her B.S. in Computer Science from Thammasat University, Thailand. Dr. Donya joined AIT in September 2002 as an Assistant Professor in SOM and was later promoted to an Associate Professor in 2009.

Turning Education Upside Down Tina Rosenberg writes in The New York Times about “flipping” the way students are taught:

Three years ago, Clintondale High School, just north of Detroit, became a “flipped school” — one where students watch teachers’ lectures at home and do what we’d otherwise call “homework” in class. Teachers record video lessons, which students watch on their smartphones, home computers or at lunch in the school’s tech lab. In class, they do projects, exercises or lab experiments in small groups while the teacher circulates. Clintondale was the first school in the United States to flip completely — all of its classes are now taught this way. Now flipped classrooms are popping up all over. … Read more at this link: http://opinionator.blogs.nytimes.com/2013/10/09/turning-education-upsidedown/ Follow AIT at • Facebook • Youtube • Twitter • Google+ • LinkedIn

November 2013 edition of the monthly newsletter of the Asian Institute of Technology (AIT).

November 2013 edition of the monthly newsletter of the Asian Institute of Technology (AIT).