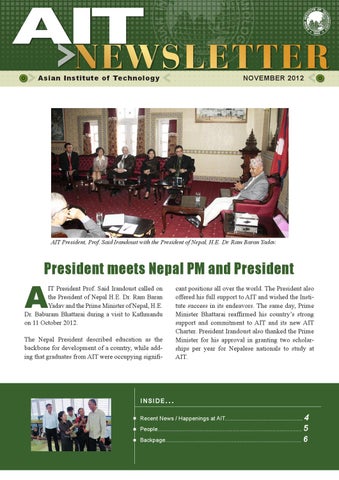 IT President Prof. Said Irandoust called on the President of Nepal H.E. Dr. Ram Baran Yadav and the Prime Minister of Nepal, H.E. Dr. Baburam Bhattarai during a visit to Kathmandu on 11 October 2012. The Nepal President described education as the backbone for development of a country, while adding that graduates from AIT were occupying signifi-

cant positions all over the world. The President also offered his full support to AIT and wished the Institute success in its endeavors. The same day, Prime Minister Bhattarai reaffirmed his countryâ&#x20AC;&#x2122;s strong support and commitment to AIT and its new AIT Charter. President Irandoust also thanked the Prime Minister for his approval in granting two scholarships per year for Nepalese nationals to study at AIT.

H.E. Mr. Ngo Duc Thang during an inspection of the AIT campus.

AIT is an undisputed pioneer in the field of education: Bhutan Minister

Minister of Labor and Human Resources, Government of Bhutan, H.E. Mr. Dorji Wangdi described the Asian Institute of Technology (AIT) as a “great seat of learning,” and an “undisputed pioneer in the field of education.” He made these remarks on the occasion of the signing ceremony of a Memorandum of Understanding (MoU) between AIT and the Royal Institute of Management (RIM) on 8 October 2012. The Minister stated that ever since he undertook a month-long program on project evaluation and monitoring at AIT in 1997, the Institute has never ceased to amaze him. “The Institute is very close to my heart, and I am a great lover of this Institute” he said. As Minister of Human Resources, I have a huge interest in education, and we look forward towards cooperation with AIT, he added.

United Nations Centre for Regional Development (INCRD) Director, Ms. Chikako Takase, appreciated the role played by AIT in hosting the global secretariat of the International Partnership for Expanding Water Management Services of Local Authorities (IPLA). She expressed this sentiment during a visit to AIT on 12 October 2012. Prof. Said Irandoust, President, AIT assured of full support of AIT in the project. Prof. Chettiyappan Visvanathan, of Environmental Engineering and Management (EEM) field of study in AIT’s School of Environment, Resources and Development (SERD), who is leading the IPLA initiative from AIT, suggested involvement of other multilateral agencies to support the project.

AIT scientists unveiled to the media some findings from a series of tests conducted at its Hydraulic Scale Model Study of the Xayaburi Hydroelectric Project, which is planned for construction in Lao PDR. They also briefed Laos’ Deputy Minister of Energy and Mines Mr. Viraphonh Viravong, who led a large delegation of Lao Government officials and media on a study visit on 25 October 2012 to AIT’s hydraulics laboratory at the Water Engineering and Management (WEM), School of Engineering and Technology (SET).

In a visit to AIT, an eight-member strong MRC delegation sought to reestablish its strong linkage with the five-decade old Institute. The delegation included many alumni from AIT, including the MRC Chief who studied at AIT, and later headed the Wetlands Alliance Program (WAP) at the Institute.

AIT has launched new programs in Nepal including a two-stage Master’s Program in Business (MBA and MBA in Energy Business Management), along with a Bachelor’s Program in Civil and Infrastructure Engineering, and Information and Communication Technology (ICT). The programs were launched on 11 October 2012 under Memorandum of Agreements (MoAs) signed between AIT and the Nepal Education Foundation-Consortium of Colleages, Nepal (NEF-CCN). The delivery of the first half of the academic programs will take place at NEF-CCN colleges in Nepal, and the second half will be delivered at the AIT main campus in Thailand.

Nine scholarships for students from Bhutan

Nine scholarships will be provided to students from Bhutan for undergraduate studies at AIT. This follows a Memorandum of Agreement (MoA) signed by Mr. Tshewang Tandin, Director General, Department of Adult and Higher Education (DAHE), Ministry of Education (MoE), Bhutan, and Prof. Said Irandoust, President, Asian Institute of Technology (AIT) on 29 October 2012.

France’s CIRAD confirms continued partnership “We are very proud to have partnership with AIT at this international level,” the President Managing Director of CIRAD, Mr. Gérard Matheron, told AIT President Prof. Said Irandoust while visiting AIT on 30 October 2012. He made these remarks during the signing of a Memorandum of Agreement (MoA) for continued collaboration through CIRAD’s faculty secondment of Dr. Sylvain Perret to the Water Engineering and Management field of study, School of Engineering and Technology (SET). From left: Prof. Said Irandoust, Dr. Sylvain Perret and Mr. Gérard Matheron

As a recipient of IWA fellowship, Dr. Alfredo Anceno acted as a co-chair/rapporteur during three technical sessions along with senior experts. The sessions included “Wastewater as a multifaceted resource for producing energy, chemical, water, and nutrients,” with Dr. Hervé Suty of Veolia Environnement; “Establishing innovative, decentralized water supply systems,” with Prof. Jeong Hyun Kim of the University of Ulsan; and “New molecular tools in action in water engineering,” with Prof. Joan Rose of the University of Michigan. He has also been asked to co-author a feature article in the forthcoming issue of IWA’s Water21 magazine.

UN ESCAP publishes policy paper authored by AIT researcher A policy paper on ‘Sustainable Urban Transport Systems – An Overview,” authored by Mr. Ridwan Quaium, a Research Associate in the Transportation Engineering (TE) field of study at AIT’s School of Engineering and Technology was published by the United Nations Economic and Social Commission for Asia and the Pacific (UNESCAP), Bangkok. The report can be read at this link: http://www.unescap.org/esd/suds/ publications/Sustainable-Urban-Transportatation-System/SustainableTransportation-9.pdf

Dr. Babel appointed Professor Dr. Mukand Singh Babel has been promoted to the position of Professor. He was earlier serving as Associate Professor in AIT’s School of Engineering and Technology. Dr. Babel is also the Coordinator of the Water Engineering and Management (WEM) field of study. Dr. Babel joined AIT in 2002, but has been associated with the Institute in Dr. Mukand Singh Babel several capacities since 1997. He obtained his Doctorate (Water Resources Engineering) and Master’s (Soil and Water Engineering) from AIT.

AIT issues to be taken up in a meeting on Nov 5 Issues related to the Asian Institute of Technology (AIT) will be taken up in a meeting on 5 November 2012. Chaired by the Permanent Secretary, Ministry of Foreign Affairs, Royal Thai Government, the meeting has been called following a request by the AIT Council. This was stated by H.E. Mr. Anil Wadhwa, Ambassador of India to Thailand, during the Institute Forum organized at AIT on 30 October 2012.

unanimous in their view that it is imperative that the host country Thailand should on board the Council and take on issues regarding matters of the Institute.”

In a brief address to the AIT community, Ambassador Wadhwa remarked that the AIT Council is seized of the AIT issues, and it had been holding regular talks with the Government of Thailand. Calling 2012 a “transition year,” he said, “The Council members were

From Chalkboards to Gaming: The future of education The History and Future of the Chalkboard University of British Columbia blog has a wonderful story about the Chalkboard. “It was Josiah F. Bumstead who first declared in his 1841 essay, The Blackboard in the Primary Schools, that the chalkboard is a groundbreaking technological invention.” It says The chalkboard stood at the core of this new teaching culture. This report will argue that the chalkboard gave rise to the standardization of public education, and its integration into English classrooms in the nineteenth century led to the widespread advancement of rote memorization as the dominant teaching pedagogy in the United Kingdom. Read more at http://blogs.ubc.ca/etec540sept12/2012/10/28/the-history-and-futureof-the-chalkboard/ On the other hand, the Scientifc American blog wrote about the role of games in educaiton. “Educating Players: Are Games the Future of Education?” says that though smart phones, tablets and video games are viewed as distractions, a “panel of technologists and educators posited that it’s time to embrace students’ use of such technologies and rethink learning in both developed and developing countries.” Read more at : http://blogs.scientificamerican.com/observations/2012/10/26/ educating-players-are-games-the-future-of-education/

November 2012 edition of monthly newsletter of the Asian Institute of Technology (AIT).

November 2012 edition of monthly newsletter of the Asian Institute of Technology (AIT).