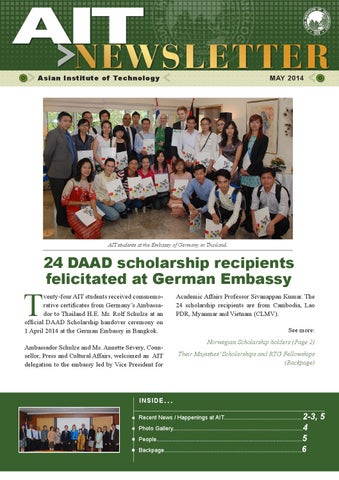 AIT students at the Embassy of Germany in Thailand.

RECENT NEWS / HAPPENINGS AT AIT MAY 2014

As a former ambassador to Myanmar, she spoke of her great fondness for the country and its people whom she said are now “extremely keen to catch up and learn” through educational opportunities. The coveted NMFA scholarship program attracts a high degree of interest in Myanmar every year, with less than 10 percent of applicants receiving a scholarship. The third batch of 40 students will enroll at AIT in the August 2014 semester.

Two AIT students meet USAID chief, participate in NASA events Two AIT students were among a select group of fellows who had the opportunity to interact with USAID chief Mr. Rajiv Shah as a part of their fellowship program. The two, Mr. Jirawat Panpeng and Ms. Khin Seint Seint Aye, also participated in joint USAID and NASA events in Washington DC, where they met with senior officials who proffered advice on their research.

“Fourteen fellows from all over the world were selected to participate in the Capstone events lasting from April 1-14, and we were among the four students from Southeast Asia,” Seint Seint said. Both students were a part of the USAID and NASA “My Community Our Earth” (MyCOE) SERVIR Global Fellowship Program. While Seint Seint is from Myanmar, Jirawat is from Thailand. Their program was also broadcast over NASA TV.

The Powersuit Exoskeleton Robot designed for the construction industry by Dr. Manukid Parnichkun of AIT’s School of Engineering and Technology was featured by the Thai newspaper Matichon on 22 April 2014. The article highlights that the Powersuit Exoskeleton Robot, which is a wearable robot, can carry a payload of up to 80 kilograms. The robot’s movement is controlled through switches attached to each joint. Hydraulic actuators are attached at the elbow and shoulder joints in each arm. Made of stainless steel, the Powersuit weights 41 kilograms. The article can be read at this link: http://www.matichon.co.th/news_ detail.php?newsid=1398154303

Led by Dr. Thammarat Koottatep of Environment Engineering and Management (EEM) field of study at AIT’s School of Environment, Resources and Development (SERD), the Naturally Acceptable and Technologically Sustainable (NATS) Toilet team from AIT displayed a Solar Septic Tank and a Hydrocyclone toilet. The fair was co-hosted by the Government of India’s Department of Biotechnology and the Bill & Melinda Gates Foundation, with the support of India’s Ministry of Housing and Urban Poverty Alleviation, Ministry of Urban Development, and Ministry of Drinking Water and Sanitation.

Dr. Shobhakar is Co-Coordinating Lead Author of the chapter on Human Settlements, Infrastructure and Spatial Planning, along with Prof. Karen Seto of Yale University. This is a new chapter in IPCC assessment which was not covered in the previous assessments. He is one of only two scientists from Thailand-based institutes to contribute to the report produced by 235 authors, 38 review editors, 180 contributing authors and over 800 expert reviewers. The worldwide scientific collaboration of international experts took over four years to complete.

dent for Resource Development stated that the event would strengthen the Instituteâ&#x20AC;&#x2122;s institutional ties with various companies. Prof. Sivanappan Kumar, Interim Vice President for Academic Affairs remarked that the bi-annual affair was a good opportunity for students to pursue their career goals.

comed 2006 Nobel Peace Prize Winner Prof. Muhammad Yunus to an exclusive executive reception and networking event in Bangkok. In his keynote address, Prof. Yunus spoke about his new “Social Business Design Lab” which is organized monthly at the Yunus Centre on Dhaka, Bangladesh. AIT Vice President for Resource Development Prof. Kazuo Yamamoto was on hand to welcome Prof. Yunus on behalf of the Institute. He was joined by Nuttaphong Jaruwannaphong, Director of the Thai Social Enterprise Office (TSEO); Dr. Faiz Shah, Director, YCA; Ms. Mariana Botero, Program Officer, YCA; and AIT Extension staff organizers. An article on the event can be read in The Nation at this link:

PEOPLE AIT alumnus appointed Finance Secretary in Nepal Mr. Yuba Raj Bhusal, an alumnus of Regional Development Planning and Management from AIT’s School of Environment, Resources and Development in 1996 has been appointed as the new Finance Secretary of Nepal. Mr. Bhusal was awarded a Gold Medal (Mahendra-vidyabhushan) by the then King of Nepal for his outstanding academic performance, having scored a perfect GPA score of ‘4’ from AIT. Prior to his appointment as Finance Secretary, Mr. Bhusal was serving as Secretary, National Planning Commision of Nepal. Having joined the Nepal Civil Service in 1980, Mr. Bhusal has served in various positions both in Nepal and abroad. He has also served as Provincial Budgeting Advisor with UNDP/Ministry of Finance in Afghanistan in 2007-08.

AIT alumnus appointed Secretary, Information and Communications in Nepal Mr. Suman Prasad Sharma, who graduated in 1995 with a Master’s degree in Environmental Technology and Management from AIT’s School of Environment, Resources and Development (SERD), has been appointed as Secretary, Ministry of Information and Communications, Nepal. Beginning his career as an assistant engineer in the Department of Water Supply and Sewerage, Mr. Sharma has served as Joint Secretary in the Ministry of Physical Planning and Works, Regional Administrator in the Western Development Region of Nepal, and Financial Comptroller General of Nepal.

Their Majesties’ Scholarships and Royal Thai Government Fellowships are available to suitable candidates applying to Master’s and Doctoral Programs for admission in the August 2014 semester. http://www.ait.ac.th/news-and-events/2014/ announcements/ait-scholarship-and-fellowships/#. U2BWzFxvyzc