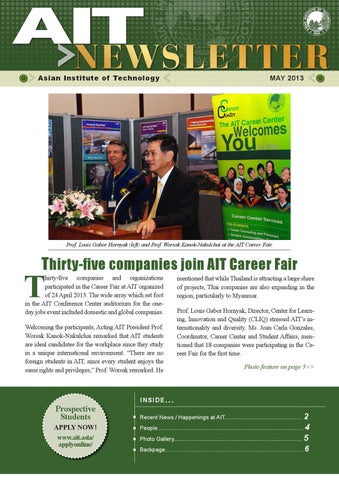 hirty-five companies and organizations participated in the Career Fair at AIT organized of 24 April 2013. The wide array which set foot in the AIT Conference Center auditorium for the oneday jobs event included domestic and global companies.

Welcoming the participants, Acting AIT President Prof. Worsak Kanok-Nukulchai remarked that AIT students are ideal candidates for the workplace since they study in a unique international environment. “There are no foreign students in AIT, since every student enjoys the same rights and privileges,” Prof. Worsak remarked. He

mentioned that while Thailand is attracting a large share of projects, Thai companies are also expanding in the region, particularly to Myanmar. Prof. Louis Gabor Hornyak, Director, Center for Learning, Innovation and Quality (CLIQ) stressed AIT’s internationality and diversity. Ms. Joan Carla Gonzales, Coordinator, Career Center and Student Affairs, mentioned that 18 companies were participating in the Career Fair for the first time. Photo feature on page 5>>

Prof. Sivanappan Kumar and Prof. Kanchana Kanchanasut appointed Acting Vice Presidents Two AIT faculty members have been appointed by the AIT Board of Trustees to serve as vice presidents. Professor Sivanappan Kumar was appointed Acting Vice President for Academic Affairs (VPAA) and Professor Kanchana Kanchanasut was made Acting Vice President for Research (VPR), as endorsed by the Board at its meeting on 22 April 2013. The two appointments followed the resignation of Prof. S. Rakshit, VPR, last year and Prof. I. M. Pandey, VPAA, on 31 March 2013. According to Acting President, Prof. Worsak KanokNukulchai, the new vice presidents will work half-time, sharing their work load with regular duties. Both Professor Kumar and Professor Kanchana waived any extra financial remuneration for their service to the Institute. Widely regarded in his field and possessing a global network, Professor Kumar is professor in Energy at the School of Environment, Resources and Development (SERD), where he also was once dean. Affectionately nicknamed “The Mother of the Internet” in Thailand, Professor Kanchana is an expert in internet technology and the founder of the TH domain name. She currently serves as director of the Internet Education & Research Laboratory (intERLab).

Chairman of the Board, Mr. Nopadol Gunavibool (extreme left) at the Board of Trustees meeting on 22 April 2013.

AIT, Wastewater Management Authority (Thailand) and TREMI sign tripartite MoU A Memorandum of Understanding (MoU) signed on 30 April 2013 between Wastewater Management Authority (WMA), Ministry of Natural Resources and Environment, Thailand, and the Asian Institute of Technology and Thai Resources and Environmental Management Institute (TREMI) is expected to spur cooperation over the next two years in master’s level education and shortterm training in the field of wastewater treatment and management. Acting President Prof. Worsak Kanok-Nukulchai signed the tripartite agreement titled “Education and training in the area of new concept on wastewater treatment and

management” on behalf of AIT at a signing ceremony and press conference at the headquarters of WMA in Bangkok. Also signing the MoU was Mr. Pairoj Sattayasansakul, Director General, WMA, and Prof. Samorn Muttamara, President, TREMI.

RECENT NEWS / HAPPENINGS AT AIT MAY 2013

73 students to arrive from JNTUK to AIT in August 2014

Scientists at AIT are set to introduce a “more intelligent pathway” for cultivating rice in Thailand, Laos, Cambodia and Vietnam through sustainable agriculture development and System of Rice Intensification (SRI) following the grant of a five-year Euros 3.4 million project by the European Union. The grant enabled the launch on 9 April 2013 of the Asian Centre of Innovation for Sustainable Agriculture Intensification (ACISAI) at AIT. The ACISAI was officially inaugurated at a brief ceremony by Prof. Jayant K. Routray, Chairman of the AIT Academic Senate, on behalf of Acting AIT President Prof. Worsak Kanok-Nukulchai, along with Prof. Norman T. Uphoff of Cornell University; Dr. Rosa S. Rolle of Food and Agriculture Organization (FAO) and Prof. Amir Kassam of University of Reading; besides Dr. Abha Mishra, Project Team Leader and Dr. Prabhat Kumar, Regional Coordinator.

The signing ceremony at AIT.

Seventy-three students will arrive from the Jawaharlal Nehru Technological University Kakinada (JNTUK), Andhra Pradesh, India to AIT in August 2014 to pursue a Master’s degree under the expanding Unified Program. A Memorandum of Understanding (MoU) and two memoranda of agreement were signed by Dr. Divya Sunitha Raj, Trustee of SHE (Social Awareness, Health and Education) Foundation, and AIT’s Acting President, Prof. Worsak Kanok-Nukulchai on 22 April 2013. JNTUK and Jawaharlal Nehru Technological University Hyderabad (JNTUH) will offer their Bachelor’s program at their respective campuses, while AIT will offer the Master’s program to students completing the fiveyear program. AIT’s Dr. Nitin Kumar Tripathi expressed confidence that following 73 students in 2014, another 267 students would arrive in 2015, and it could reach its full capacity of 375 students in 2016 with an annual tuition fee of 160 million THB.

Prof. Kim Oanh interviewed by USAID, featured in ‘Impact Blog’ Prof. Nguyen Thi Kim Oanh of Environmental Engineering and Management (EEM) was interviewed by USAID as a part of their “Women’s History Month” theme. Her interview was featured in USAID’s ‘Impact blog’ under the theme “Women Inspiring Innovation Through Imagination: Celebrating Women in Science, Technology, Engineering and Mathematics.” Titled “Paying It Forward - How Education Can Create a Better Environment for Future Generation,” the interview focused on her work in the field of environmental pollution and her inspiration to pursue science. The interview can be read at this link: http://goo.gl/PnX10 Prof. Nguyen Thi Kim Oanh

AIT student receives AGU Berkner Fellowship Mr. S. H. M. Fakhruddin, a doctoral student at AIT has been granted the American Geophysical Union (AGU) Berkner Fellowship. His paper on “Medium Range Ensembles Flood Forecasts for Community Level Applications” is among the three selected as an Outstanding Student Paper. Mr. Fakhruddin will present his paper at the 2013 AGU meeting of the Americas to be held at Cancun, Mexico from 14-17 May 2013. The paper is based on his Master’s research as a student of Water Engineering and Management. Supervised by Prof. Mukand S. Babel of AIT, and Dr. Akiyuki Kawasaki, visiting faculty at AIT of the University of Tokyo, the research created a model to increase lead-time for flood forecasting in Bangladesh.

Ayutthaya temples in for augmented reality, courtesy AIT student Ever been irritated by the use of headphones provided by tour guides at historic sites? Have you complained that the audio experience at tourist places dampens your overall tour experience? Well, an AIT student has the answer for you. “Augmented reality” is the answer according to Ms. Jittin, a Master’s student of Remote Sensing and Geographical Information Systems. Armed with a tablet and an application that she created, visitors at the UNESCO World Heritage site of Ayutthaya can now benefit from the benefits of augment reality. Scan the tablet or your phone towards the monument or temple, and a threedimensional visualization will appear on your screen. A menu chart lists images, documents, video, website, audio, a 3D model and the route map. Click on the image to view the monument from different angles. Read

about the temples of Ayutthaya, and watch its video while standing right in front of the monument. More details are available at this link: http://goo.gl/svTPr

$300 Million Scholarship for Study in China Signals a New Focus New York Times reports: “The private-equity tycoon Stephen A. Schwarzman, backed by an array of mostly Western blue-chip companies with interests in China, is creating a $300 million scholarship for study in China that he hopes will rival the Rhodes scholarship.” The endowment represents one of the largest single gifts to education in the world and one of the largest philanthropic gifts ever in China. The Schwarzman Scholars program will pay all expenses for 200 students each year from around the world for a one-year master’s program at Tsinghua University in Beijing. Read more at this link: http://goo.gl/nIWoc

May 2013 edition of the monthly newsletter of the Asian Institute of Technology (AIT).

May 2013 edition of the monthly newsletter of the Asian Institute of Technology (AIT).