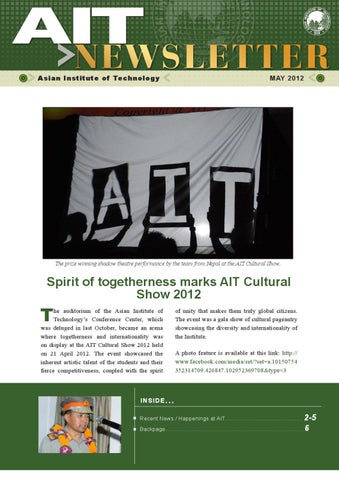 The prize winning shadow theatre performance by the team from Nepal at the AIT Cultural Show.

he auditorium of the Asian Institute of Technologyâ&#x20AC;&#x2122;s Conference Center, which was deluged in last October, became an arena where togetherness and internationality was on display at the AIT Cultural Show 2012 held on 21 April 2012. The event showcased the inherent artistic talent of the students and their fierce competitiveness, coupled with the spirit

Pak Ambassador launches WB aided program AIT, as a part of a $ (US) 15 million World Bank-funded project, will train more than 400 managers, technicians and staff from Pakistan’s privatized electric power distribution sector through a two-month intensive professional development program organized in Thailand. The Energy Distribution Services Management and Technology (EDSMAT) Program launched in Bangkok on 21 April 2012 is a tripartite program spearheaded by AIT Extension in cooperation with AIT’s Energy field of study, and its School of Management. Officially launching the EDSMAT, Pakistan’s Ambassador to Thailand, H.E. Mr. Sohail Mahmood, underscored the importance of professionalizing the delivery of energy distribution services in his home country, saying: “The energy sector is at the top of the agenda in Pakistan, and the pivotal role played by power distribution companies is crucial.”

Ambassador of Timor Leste to Thailand, H.E. Mr. João Freistas de Câmara, assured the Asian Institute of Technology (AIT) of all help to facilitate the program initiated by AIT towards Prof. Said Irandoust (left) and H.E. Mr. João Freistas de Câmara capacity building in his country. During a visit to AIT on 25 April 2012, H.E. Mr. Câmara remarked that Timor Leste had made a substantial budget allocation for human resource development.

At AIT to discuss the program on capacity building, the Ambassador remarked that the embassy would do everything to facilitate the partnership between AIT and the Ministry of Education in Timor Leste. Welcoming the Ambassador, AIT President Prof. Said Irandoust stated that AIT will soon finalize the collaboration with the Ministry of Education. AIT has already proceeded on preparations to receive students from Timor Leste, he added.

The former prime minister, who is also the leader of opposition and the head of the Democrat Party, shared his experience about ASEAN and the significance of connectivity, governance and government, increasing demands of infrastructure, management of urban growth, environmental protection, along with the need to harmonize rules and regulation to foster trade.

AIT students give to Thai orphanage AIT’s Student Union recently opened up its heart and wallet by donating 16,000 THB to a rural orphanage in Thailand run by the organization “Baan Unrak” or House of Joy. The financial gift was

handed over to House of Joy’s Italian founder and director Ms. Dolci Donata at a small ceremony at the AIT Student Union (AITSU) Office in Korea House, AIT. The money was raised by the AITSU from selling commemorative T-shirts for International Women’s Day 2012. SU Campus and Environment Chairperson, Mr. Afzal Jamil, 29, explained that it was the first time such a donation had been made by the union. Mr. Arjun Kumar, an MBA student from Indore, India, who was instrumental in bringing House of Joy and AITSU together, said: “As students and as human beings it’s important for all of us to be socially conscious of others in need.” Children from Baan Unrak also gave a dance and yoga performance on campus at the AIT Cultural Show on 21 April 2012.

Led by Prof. Ken Satoh, Head of the Department of Informatics and Professor of Principles of Informatics Research Division, Sokendai, the delegation informed AIT students about the opportunities offered by the program. The program was finalized following a Memorandum of Agreement (MoA) signed by the Sokendai President, Naoyuki Takahata, and AIT President, Prof. Said Irandoust in January 2012.

Prof. Irandoust wrote that the suffering experienced during the floods had forced planners to rethink development strategies. The entire article can be read in the Bangkok Post at this link: http://www.bangkokpost.com/news/local/287340/rebuilding-asafe-secure-and-sustainable-thailand

in Myanmar. In his visit to AIT on 19 April 2012, Dr. Charles E. Feibel,Vice President, Project Management, Louis Berger, stated that both AIT and Louis Berger have a strong connection with Myanmar, and they could benefit from a partnership. Meeting with AIT officials, he stated that Louis Berger’s first international project was the construction of a road from Yangon to Mandalay. The company has also been associated with ADB’s projects in Myanmar. Dr. Feibel inquired about the scholarships being offered to Myanmar students to study at AIT. He was keen to know about AIT’s partners in Myanmar, particularly those involved in education and training.

focused institution ranked number one for the number of Canada Research Chairs in Engineering. Ms. Dubé outlined details of its research internships for international visiting students.

Clausthal University delegation visits AIT A delegation from Clausthal University of Technology (TU Clausthal), Germany visited AIT and expressed interest in organizing student exchange programs. Led by Prof. Volker Wesling, Vice President for Research and Technology Transfer, the delegation Calusthal University delegation at AIT. also included Ms. Susanne Romanowski, Director, and Ms. Astrid Abel, Deputy Director, International Center (IZC). Visiting AIT on 3 April 2012, Prof.Wesling remarked that AIT and TU Clausthal had a partnership eight years ago, and they are keen to capitalize on the previous agreement. “We have a keen interest in the field of geo sciences and we would like AIT to associate with us,” he remarked. TU Clausthal has three faculties, with each faculty hosting one specialized center in the field of energy, simulation and material science respectively, he revealed.

AIT’s “top talent” draws top-level interest at Career Fair 2012 Thirty-one companies participated in the Career Fair 2012 organized at AIT on 25 April 2012, including a who’s who of leading regional engineering companies, along with well-known companies from sectors such as communications, information technology, energy, AIT Career Fair 2012. hospitality, education, manufacturing and construction, biotechnology, consulting services, agriculture, mining, and travel. The range of participants provided real opportunities for job-seekers from all three AIT Schools. By mid-day, the once flooded library venue was inundated with a sea of soon-to-be graduates interested in internships and job opportunities on offer. All guests and participants were warmly welcomed by AIT President Prof. Said Irandoust, who noted that it was the first job fair held since the institute became an international intergovernmental organization.

National Institute of Rural Development (NIRD), India is keen to partner with AIT, particularly in offering joint programs in the field of rural development. This sentiment was expressed by Dr. M.V. Rao, Director General, NIRD, during a visit to AIT. Supported by the Ministry of Rural Development, Government of India, NIRD is running 40 international training programs. Dr. Rao expressed his appreciation of AIT, stating that since the mission and vision of the two institutes are similar, both can work together to impart training to professionals. He described natural resource management, rural infrastructure, sustainable agriculture, local governance and livelihood issues as the focus areas of NIRD.

Dr Dailey wins AIT Marathon A spirited Dr. Matthew Dailey, Associate Professor in AIT’s School of Engineering and Technology (SET), emerged victorious in the AIT Mini Marathon organized by the AIT Student Union on 10 April 2012. Crossing the finishing line much earlier than his younger students, Dr. Dailey was the declared overall winner of the marathon. Inaugurating the event, Prof. Worsak Kanok-Nukulchai, Vice President for Resource Development, AIT, complimented the students for their enthusiasm. “It is your campus, and it is good that you are organizing events that involve all students,” he remarked. Mr. Bhawat Traipattanakul, President, AIT Students

Union (AITSU) thanked Prof.Worsak and everyone else for participating in the event.

Prof.Worsak Kanok-Nukulchai (wearing a necktie) along with participants and volunteers.

An MIT Professor and psychologist, Sherry Turkle and author of “Alone Together: Why We Expect More From Technology and Less From Each Other,” recently wrote an article in the New York Times Sunday Review titled “The Flight from Conversation.” The article reads: “We live in a technological universe in which we are always communicating. And yet we have sacrificed conversation for mere connection. At home, families sit together, texting and reading e-mail....We’ve become accustomed to a new way of being “alone together.” The article concludes by saying: “So I say, look up, look at one another, and let’s start the conversation.” http://www.nytimes.com/2012/04/22/opinion/sunday/the-flight-from-conversation. html The article provoked a reaction in the Huffington Post with Michael Roth, President, Wesleyan University, responding in “Education Unplugged: Learning Through Conversation.” http://www.huffingtonpost.com/michael-roth/education-unplugged-learn_b_1446216. html Follow AIT at • Facebook www.facebook.com/aitasia • Youtube www.youtube.com/aitasia