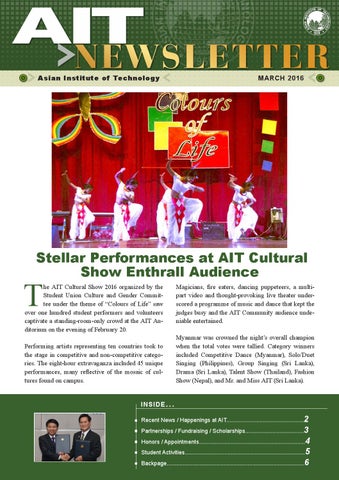 he AIT Cultural Show 2016 organized by the Student Union Culture and Gender Committee under the theme of “Colours of Life” saw over one hundred student performers and volunteers captivate a standing-room-only crowd at the AIT Auditorium on the evening of February 20. Performing artists representing ten countries took to the stage in competitive and non-competitive categories. The eight-hour extravaganza included 45 unique performances, many reflective of the mosaic of cultures found on campus.

Mr. Chang Soyc, Counsellor, The Embassy of the Republic of Korea (ROK) in Thailand, and Mr. Han Jinsup, Director, Korea International Cooperation Agency (KOICA) visited AIT on 25 February 2016, and expressed their intention to resume Korea's constructive relationship with AIT. They were welcomed by AIT President Prof. Worsak Kanok-Nukulchai and senior AIT officials, who highlighted the close partnership between the two. Prof. Worsak mentioned that the hub of AIT student activities is the Korea House, which was gifted by the Government of Korea to AIT. Similarly, South Korea had also granted an endowment fund of $1 million to AIT, besides deputing seconded visiting faculty to AIT. The delegates also visited Korea House and met with AIT students.

PEA signs 20 Mil. Baht agreement with AIT to upgrade 24 staff The Provincial Electricity Authority (PEA) of Thailand will send twenty-four of its staff to enroll in Master and Doctoral programs offered by AIT over the next four years, to support its plans for developing “Smart Network” energy services. In a Memorandum of Agreement signed on 15 February 2016 by PEA Governor Sermsakool Klaikaew and AIT President Prof. Worsak Kanok-Nukulchai, five qualified staff will pursue their Master's degree at AIT each year, while one qualified employee will enroll in an Energy doctoral program each year for the next four years.

Management, all of which are under the human resource development plan of PEA.

Industrial Estate Authority of Thailand ties up with AIT

Under the MoU signed by I-EA-T Governor Dr. Verapong Chaiperm and AIT President Prof. Worsak Kanok-Nukulchai, both sides agreed to coordinate to enhance industrial development training, promote business and industrial investment and to generate business networks to strengthen the potential of investors of both parties with the implementation of the ASEAN Economic Community. The deal is expected to underscore I-EA-T’s drive to be one of the top three organizations in developing and administering industrial estates in Southeast Asia through its “ASEAN TOP 3” strategic excellence campaign.

Prof. Chongrak Polprasert has been bestowed with the title of Emeritus Professor. Prof. Chongrak completed his Bachelor’s in Civil Engineering from Chulalongkorn University (1971), and his Master’s in Environmental Engineering from AIT (1974). He obtained his Ph.D. from the University of Washington, Seattle, USA in 1977. Prof. Chongrak joined AIT as Assistant Professor in 1977 and was promoted to the rank of Professor in 1989. He has served as Professor at AIT for about 20 years, and graduated 24 Ph.D. and 100 Master’s students. His publication record includes three books, 34 book and monographs, and 112 refereed journal articles. He has also served AIT as Dean of the School of Environment, Resources and Development (SERD) for nine years.

The weekly trip to the market has now become more sustainable, courtesy of an initiative of the AIT Campus Sustainability Club (AITCSC). Moving beyond carpooling that students and residents of AIT often practice when they travel from the Institute campus, the Club went a step ahead. They engaged a Songthaew, an indigenous mode of transportation, for the weekly grocery visit to the nearby Talad Thai market, which is one of the biggest markets of fresh farm produce in Thailand. This initiative has two targets — sharing of transport and replacing plastic bags with cloth bags. What is unique is that the Club has also prepared an estimation of carbon emissions. A return trip to Talad Thai market covers 14 kilometers, and considering a mileage of 17 kilometers per litre, the Club estimated that it results in a reduction in carbon emission of 3.835 kg per trip for a cohort of 11 students — a small amount, but a large step towards a sustainable lifestyle.

AIT students act as social reporters at the ASEAN Conference on Biodiversity Eleven student volunteers from AIT acted as ‘Social Reporters’ at the Second ASEAN Conference on Biodiversity (ACB) 2016 held on 15-17 February 2016 at Bangkok. As social reporters, AIT students documented the technical sessions, AIT students at ASEAN Conference on summarized the proceedings, Biodiversity. provided inputs to the daily bulletin, assisted in the field trip for delegates, and participated in discussions with policy makers, experts, NGOs, and government officials. Nine of the 11 student volunteers came from the Natural Resource Management (NRM) field of study, while one each came from Environmental Engineering and Management (EEM), Regional and Rural Development Planning (RRDP), and Remote Sensing and Geographical Information Systems (RS/GIS). The 11 students came from nine countries including two each from Thailand and India, and one each from Cambodia, Myanmar, Nepal, Pakistan, the Philippines, Taiwan, and Vietnam.

AIT Research Competition 2016: Call for Ideas ideas is 15 February. The call is followed by submission of ideas (25 March), first round results (5 April), second round results (12 May), and final award (13 May). Details are available at this link: http://goo.gl/OXUlZP AIT Solutions has called for ideas for the AIT Research Competition 2016. The competition is a platform for AIT researchers to develop their research and business idea to scalable solutions by working with industry experts and venture capitalists. Winners will have the opportunity to access adequate funds, technical assistance, and guidance required to bring their innovative ideas to life. Open to AIT researchers, the deadline for call for

Global Re-engagement with Former AIT Faculty Members Aside from the official appointment of Emeritus Professor by the Board of Trustees, AIT has launched an innovative way to connect with its pool of former faculty members in the form of "Distinguished Adjunct Faculty (DAF)". To entertain their strong wish to contribute to AIT, this engagement opens an official channel for them to maintain their association with AIT. This pool also includes AIT’s prominent alumni who have become professors in top universities all over the world. In late October 2014, AIT President Prof. Worsak Kanok-Nukulchai invited all former faculty members “who had AIT in their hearts” to participate in a survey soliciting their professional support. The aim was to strengthen AIT’s relationship with this diaspora of former faculty members, so that they could serve as AIT’s academic ambassadors. So far 73 former faculty members working at top universities around the world have accepted AIT’s offer to join the DAF initiative. In addition, seven alumni who possess a professorial rank in renowned universities have also accepted to be DAF. Under the DAF initiative, a former faculty member can maintain a professional affiliation with AIT by Editor: using AIT’s ID, busiBajinder Pal Singh ness card and email adbajinder@ait.asia dress. AIT would proDesigner: vide a common office Nadhika Mendhaka Photos: space with secretarial Paitoon Tinnapong support whenever DAF Student Union Media members are present at AIT. Although the asFor feedback, contact Media and Communications sociation is voluntary, Unit at AIT DAF members can be mcu@ait.asia remunerated on spe-