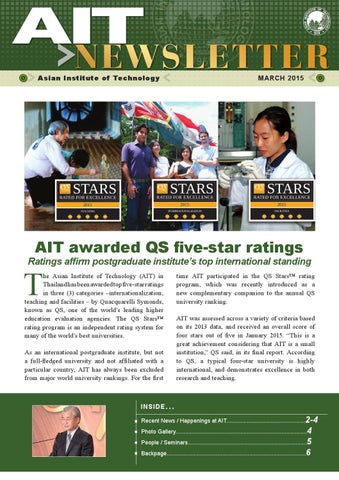 time AIT participated in the QS Stars™ rating program, which was recently introduced as a new complementary companion to the annual QS university ranking.

As an international postgraduate institute, but not a full-fledged university and not affiliated with a particular country, AIT has always been excluded from major world university rankings. For the first

AIT was assessed across a variety of criteria based on its 2013 data, and received an overall score of four stars out of five in January 2015. “This is a great achievement considering that AIT is a small institution,” QS said, in its final report. According to QS, a typical four-star university is highly international, and demonstrates excellence in both research and teaching.

he Asian Institute of Technology (AIT) in Thailand has been awarded top five-star ratings in three (3) categories –internationalization, teaching and facilities – by Quacquarelli Symonds, known as QS, one of the world’s leading higher education evaluation agencies. The QS Stars™ rating program is an independent rating system for many of the world’s best universities.

AIT alumnus is Premier of Taiwan While the 55-year history of AIT is laden with achievements of its alumni, the appointment of AIT Alumnus H.E. Dr. Mao ChiKuo as Premier of Taiwan, is a historical first for the Institute. The newly appointed Premier of Taiwan is the first alumnus of the Institute to rise to the position of Premier. Previous AIT alumni have held senior ministerial positions in many countries all across the globe. As Premier of the Executive Yuan, he heads the executive branch of Taiwan. Congratulating Dr. Mao, AIT President Prof. Worsak Kanok-Nukulchai described it as “a true testimony to the success of AIT’s alumni in Taiwan.” It is an indicator of the immense contributions that AIT alumni have made towards its economic development and prosperity,” Prof. Worsak added. Dr. Mao’s association with AIT stems from his Master’s

AIT is one the most prestigious institutes in Asia: Bangladesh Ambassador On her maiden visit, H.E. Ms. Saida Muna Tasneem described AIT as one of the most prestigious institutes of Asia. H.E. Ms. Saida Muna Tasneem Visiting AIT on 3 February 2015, H.E. Ms. Tasneem recounted her days as a student at the Bangladesh University of Engineering and Technology (BUET), as she reminisced on the prestige enjoyed by AIT. “It was an aspiration of BUET students to join AIT,” she said. The Ambassador remarked that it would be her privilege to help raise the profile of a top Asian institute like AIT in the global discourse. She also proposed the establishment of “AIT Country Chairs,” whereby different countries could establish their respective “Chairs” at AIT. The Ambassador was accompanied by Md. Azizur Rahman, Counsellor, Embassy of Bangladesh. See also Page 5 and 6.

degree in Engineering from the Division of Community and Rural Development in 1975.

Australian Ambassador to Thailand visits AIT H.E. Mr. Paul Robilliard, Ambassador of Australia to the Kingdom of Thailand, called on AIT on 2 February 2015. Ambassador RobilH.E. Mr. Paul Robilliard liard expressed interest in knowing AIT’s full range of current collaborations with Australia, to identify where specific opportunities may exist. He was also receptive to learn about the AIT faculty secondment initiative, and the upcoming Regional Forum on Climate Change to be hosted by AIT in July. AIT President Prof Worsak Kanok-Nukulchai introduced the ambassador to many aspects of AIT’s regional focus and international character. He was pleased to inform that Australia is one of the eight founding member countries of the South-East Asia Treaty Organization (SEATO), which founded AIT in 1959.

The Asian Development Bank-Japan Scholarship Program (ADBJSP) at AIT is among the most successful scholarship schemes, and the program will continue to offer scholarships to students. These were the sentiments expressed by Mr. Tatsuya Kanai, Senior Advisor, Office of Cofinancing Operations, ADB during this visit to AIT on 4 February 2015.

The scholarship program, which began in 1988, has so far produced 335 alumni, and 21 students are currently enrolled at AIT under this program. Led by Mr. Kanai, the ADB delegation included Mr. Kazushi Sato, Senior Financing Partnerships Specialist, and Ms. Eloise Valerie M. Martinez, Associate Financing Partnerships Officer. Mr. Kanai stated that while ADB is extremely happy with the program, it also seeks feedback both from the recipients and AIT. He also proposed a system for tracking the career paths of the ADB scholarship recipients, and stressed a need for greater national diversity among scholarship recipients.

Uzbekistan Consulate-General delegation visits AIT A delegation from the Consulate-General of the Republic of Uzbekistan to Thailand, led by its Vice-Consul Mr. Sherzod Soatov, visited AIT on 13 February 2015 to promote cooperation with AIT. “With its immense contribution in the field of education, science and arithmetic, Uzbekistan has a lot of potential,” Vice-Counsul Mr. Sherzod said. Accompanied by two officials — Chief of Chancery Mr. Murad Talipov, and Mr. Worachit, Secretary to Consulate General, the three-member delegation invited AIT officials to visit Uzbekistan, and offered to facilitate meetings between AIT and the Ministry of Higher Education.

Stating that demand for technical expertise and training is far outstripping capacity, Head of the United Nations International Strategy for Disaster Risk Reduction (UNISDR) Office for Northeast Asia, Dr. Sanjaya Bhatia, requested AIT to share its roster of experts, and to consider a modality for delivery of Global Education Training Institute for Disaster Risk Reduction (GETI) training tools and learning modules. Meeting with AIT officials on 5 February 2015. Bhatia, who was accompanied by Mr. Armen Rostomyan, Program Officer, stated that GETI is interested to franchise its 10-module training portfolio through partnerships with universities and institutes to conduct training of trainers.

130 aspirants savor AIT for a day at Open House One-hundred-andthirty aspirants savored life at AIT for a day at the Open House organized on 6 February 2015. Coming from various universities, these potential applicants were addressed by the AIT President Prof. Worsak Kanok-Nukulchai who introduced them to the underlying philosophy of the Institute. “AIT is the best place in Thailand to prepare yourself for international competition,” Prof. Worsak remarked, as he exhorted students to increase their appetite for knowledge and learning. Welcoming prospective students to AIT, Dr. Gabrielle Groves, Head, External Relations and Communications Office (ERCO), enumerated the unique features of life at AIT. AIT makes you a “global citizen” as you forge lasting relationships and form international networks, she remarked.

Mr. Bishwakanta Gautam has joined Traversing the AIT as Chief Internal Auditor. Mr. path of a posGautam is a Certified Internal Auditor sible Asian and holds a Master’s Degree in BusiCentury, Dr. ness Administration. He has completed Bindu Lohani, various assignments in internal auditVice Presiing, audit system, capacity building, Mr. Bishwakanta dent of Asian Gautam financial management and parliamenDevelopment tary capacity building in Sierra Leone, Dr. Bindu Lohani Bank (ADB) Afghanistan, Timor-Leste, Cambodia and Laos as a United delineated Nations staff member, and as a consultant under the World the journey from agricultural economies to Bank and EU-funded projects. He has served with the Office knowledge economies at a seminar on “Deof Auditor General of Nepal for 21 years holding progressive velopment and Innovation Challenges in responsibilities as Audit Officer, Director and Assistant AudiAsia: Role of Knowledge Institutions,” which tor General. Mr. Gautam is a Nepalese national. was delivered at AIT on 25 February 2015. Dr. Lohani, who is an alumnus and former faculty member of AIT, stated that Korea represents a unique example in Asia, where a country has moved from being a developing economy to a developed economy. He identified water, sanitation, integrated water resource management, clean energy, sustainable transport, urban development and smart liveable cities as growth areas in Asia.

Unveiling the story of inclusive growth in Bangladesh

Bangladesh represents a unique example of inclusive banking, where the underprivileged are able to open bank accounts for as little as 10 taka (12 cents). Moreover, 80 perDr. Atiur Rahman cent of the rickshaw pullers in the capital city of Dhaka use mobile financial services. Mobile financial services cross USD 1 billion every month, and in January 2015 it touched $ 1.2 billion. Unraveling the success story of Bangladesh was Dr. Atiur Rahman, Governor, Bangladesh Bank, at a lecture delivered at AIT on 16 February 2015.

Two projects prepared by AIT were presented at the King Narai military camp on the occasion of Establishment Day at the King Narai Military Camp. Presenting the projects were Mr. Waqar Shahid at the King Narai Military Camp. Mr. Waqar Shahid, a doctoral student, and Dr. Mongkol Ekpanyapong of Microelectronics and Embedded Systems of AIT’s School of Engineering and Technology (SET). The two projects include the fire detection system called “Quick Blaze” and a human motion detection system, both of which are being developed at the Vision Graphics Lab of AIT under the supervision of Dr. Matthew N. Dailey and Dr. Mongkol, both of SET. The “Quick Blaze” system is a real-time detection system which can detect flames and fires within 30 seconds. The human motion detection system also works in real-time, and it can record frames from any movement or activity within a restricted area.

With the Ambassador of Bangladesh to Thailand, H.E. Ms. Saida Muna Tasneem in the audience, Dr. Rahman remarked that financial inclusion was bolstering economic growth in the country.

AIT Library Fundraising Campaign crosses two-third’s mark Within weeks of launching the AIT library fundraising campaign, the initiative has raised 33.44 million THB (over 1 million USD), which is almost two-thirds of the target of the 50 million THB. The campaign, which began in December 2014, will conclude on 31 March 2015. More details are available here: http://www.modernlibrary.ait.ac.th An updated list of donors (Feb 2015) is available at this link: http://www.ait.ac.th/news-and-events/2015/ news/150225-donors-list.pdf

Vice Chairman of the AIT Board of Trustees. Dr. John D. Nelson (left) hands over his personal donation from Dr. John and Mrs. Darlene Nelson of US $ 16, 260.91 to AIT President Prof. Worsak Kanok-Nukulchai.

LinkedIn has announced three new tools for students: Decision Boards, University Outcome Rankings and University Finder “Decision Boards is a decision-making tool meant to help students “share their evolving thought process with and request input from trusted advisors.” They can also meet future classmates for inspiration and commiseration before even stepping on campus. University Finder is supposed to make searching for schools a more personalized experience using interactive graphs based on the future career each student imagines for himself or herself. University Outcome Rankings aims to help by showing which schools are best at launching graduates into desirable jobs.” From The Next Web: http://goo.gl/Ccwacc Check out AIT at: https://www.linkedin.com/edu/school?id=17195

March 2015 edition of the monthly newsletter of the Asian Institute of Technology (AIT).

March 2015 edition of the monthly newsletter of the Asian Institute of Technology (AIT).