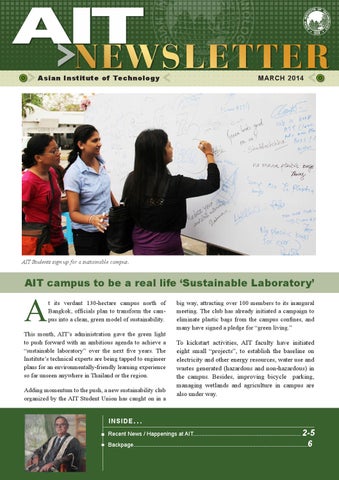 AIT campus to be a real life ‘Sustainable Laboratory’ t its verdant 130-hectare campus north of Bangkok, officials plan to transform the campus into a clean, green model of sustainability. This month, AIT’s administration gave the green light to push forward with an ambitious agenda to achieve a “sustainable laboratory” over the next five years. The Institute’s technical experts are being tapped to engineer plans for an environmentally-friendly learning experience so far unseen anywhere in Thailand or the region. Adding momentum to the push, a new sustainability club organized by the AIT Student Union has caught on in a

big way, attracting over 100 members to its inaugural meeting. The club has already initiated a campaign to eliminate plastic bags from the campus confines, and many have signed a pledge for “green living.”

To kickstart activities, AIT faculty have initiated eight small “projects”, to establish the baseline on electricity and other energy resources, water use and wastes generated (hazardous and non-hazardous) in the campus. Besides, improving bicycle parking, managing wetlands and agriculture in campus are also under way.

A high-level delegation of officials representing Americaâ&#x20AC;&#x2122;s Colorado State University (CSU) visited AIT on 24 February 2014 to explore possibilities for collaboration, and to build on the two institutionsâ&#x20AC;&#x2122; long-established history of partnership. The CSU delegates were welcomed by H.E. Dr. Subin Pinkayan, Chairman of the AIT Board of Trustees, who organized the visit. Dr. John D. Nelson, Professor Emeritus at CSU and member of AIT Board of Trustees led the CSU delegation. Interim AIT President Prof. Worsak Kanok-Nukulchai chaired the board room meeting where ideas were raised for AIT-CSU student exchanges, faculty secondments, internships, and dual degree programs. Chairman of the AIT Board of Trustees, H.E. Dr. Subin Pinkayan, former Minister of Foreign Affairs, and Prof.

Seminar on potential and challenges on algae

A seminar on algae as sustainable feedstock for food, fuel and chemicals delved on its potential and challenges, and identified the progress made in this field. Jointly delivered by Prof. Kenneth F. Reardon and Prof. David S. Dandy of Colorado State University (CSU), USA on 25 February 2014, the seminar also presented the research work being undertaken at CSU. Prof. Reardon stated that algae holds significant potential to tackle the issues of food production, though major challenges include scaling up of operations, and water consumption. The seminar was organized by the Food, Agriculture and Bio Systems (FABS) Cluster, School of Environment, Resources and Development (SERD), AIT. Dr. Anil Kumar Anal of SERD, while welcoming the delegates mentioned the research collaboration between AIT and CSU.

As part of the current AIT Road Map development work, H.E. Dr. Subin Pinkayan, Chairman, AIT Board of Trustees, visited the campus on 14 Feb 2014 to listen to international students’ views on development in Asia.

The AIT Student Union (SU) met the Interim AIT President, Prof. Worsak Kanok-Nukulchai, and apprised him of student initiatives as well as issues related to the student community. Led by SU President Mr. Salman Ali Suhail, the Student Union presented its proposals including the new Bicycle Rent System, the AIT Campus Sustainability Club, and the provision of new space for indoor games.

Meeting with student representatives of 14 countries at an open forum, the chairman was joined by Professor John D. Nelson, member of the AIT Board of Trustees; Professor Worsak Kanok-Nukulchai, Interim President; and Dr. Gregory Chiu, Professor of Practice, AIT.  Asked for their opinions, invited graduate student representatives cited specific examples of key developmental needs in their respective countries. The AIT Chairman and President also heard students’ explain how AIT could tackle a number of issues in their home countries, assist regional development, and address issues of global concern.

The group also presented the SU Official Calendar for the January 2014 semester. Mr. Suhail described the online complaint and feedback system, and proposals for improvements of sitting areas on campus. Other campus issues including the renovation of the AIT Library, and strengthening of campus security were also discussed. The Student Union will also organize an Open Forum with the President in the coming weeks.

12 students from Sri Lanka to join AIT’s program in Bio Systems Engineering Twelve students from Sri Lanka’s South Asian Institute of Technology and Management (SAITM) will join AIT for their third year of Bachelor’s program in Bio Systems Engineering in September 2014. Beginning the next academic session, these students will study at AIT’s School of Environment, Resources and Engineering (SERD), where they will complete their third and fourth years of the program. SERD will also host 40 students next year in the same program. Modalities of the students’ arrival at AIT were finalized by Prof. C Visvanathan, Interim Dean, SERD on his visit to Sri Lanka where he met Dr. Sisuru Sendanayake, Dean, Faculty of Engineering, SAITM. At the meeting on 7 February 2014, the officials reviewed the enrolment of the two batches of students. Prof. Visvanathan, who was accompanied by Mr. Sanjeev Jayasinghe, Director, Fundraising, AIT, also met the two batches of incoming students.

The event was jointly organized by the International Research Centre for River Basin Environment (ICRE), University of Yamanashi, Japan; Brawijaya University, Indonesia; Centre of Research for Environment Energy and Water (CREEW), Nepal; and the Water Engineering and Management (WEM) Program, School of Engineering and Technology, AIT. Delivering the keynote address titled “Future Work for Development of Water Management in Asian Countries,” University of Yamanishi’s Prof. Futaba Kazama stressed that scientists’ collaboration with the academe, officialdom, nongovernmental organizations, and citizenry is essential to solving existing water-related problems across the continent.

GIS technology is for ‘everyone’ – ESRI executives says Geospatial technologies such as Geographic Information Systems ( G I S ) a n d R e mote Sensing (RS) are valuable tools for managing Asia’s stressed natural environment, international experts this week told a scientific seminar at AIT. Organized by the Regional Network Office for Urban Safety (RNUS), School of Engineering and Technology, AIT; and the International Center for Urban Safety Engineering (ICUS), The University of Tokyo in cooperation with ESRI (Thailand) Co., Ltd, the seminar on 10 February 2014 attracted a large on-campus audience of faculty, staff and students. In his keynote address titled “Spatial thinking and problem-solving with GIS,” Dr. Michael Gould, Global Education Manager, ESRI, USA, pointed out that the technology is no longer only for geographers, as it has tremendous applications for business and society, including the environment.

CONDOLENCE: Prof. Donald George AIT joins everyone in condoling the death of the former Vice Chairman of the AIT Board of Trustees, Prof. Donald George, who passed away in January this year. Prof. George was elected to the AIT Board of Trustees in 1978, and became the Vice Chairman in July 1982. As a member of the Board, Prof. George chaired the Policy and Planning Committee, acted for the Chair on the Executive Committee and the full Board, and participated in the deliberations of the Faculty, and the Student Relations Committee. Professor George also served as a member of three Presidential Search Committees. Prof. George was awarded the honor of “Officer of the Order of Australia” in 1979, and a Centenary Medal for services to Australian society in atomic energy in 2001. He served as the second Vice-Chancellor of University of Newcastle (UON) from 1975-1986.

AIT Library Donation campaign kick starts with Myanmar donation The fundraising campaign for rebuilding the AIT Library got off to a start with the donation of USD 3900 handed over by the AIT Alumni Association (Myanmar chapter) to Prof. Worsak Kanok-Nukulchai, Interim President, AIT in Yangon. “This is one of the first donations and it should lead to more contributions for rebuilding the AIT library,” Prof. Worsak remarked while expressing his gratitude after receiving the donation. The donation was accepted by Prof. Worsak and H.E. Dr. Sahas Bunditkul, former Deputy Prime Minister of Thailand and member of AIT Board of Trustees. “As soon as we learnt that a plan to rebuild

the AIT library had been formulated, we got together to contribute,” Mr. Soe Myint, President, AIT Alumni Association (Myanmar Chapter) said. Former President of the Association, Ms. Alice Khin Aye Aye Mon, remarked that the AIT library was a part of the lives of all AIT students, and alumni have fond recollections of the times spent in the library.

Speaking at the Press Conference, Ambassador Ollestad remarked that AIT is a “highly respected and well-known learning institution in the region.” Norway has been a strong supporter of AIT for almost four decades and has invested considerable funds and technical assistance in this proud institution, she said. She added that AIT has produced thousands of Master’s and Doctoral graduates...”

AIT to organize Open House AIT is staging an Open House for prospective students and their families on 25 March 2014 from 10:00-14 :30 hours. The Open House will enable prospective applicants to acquaint themselves with AIT and will provide them with a first-hand experience of its wide-array of academic and research offerings at its three Schools. To register, please contact AIT’s External Relations and Communications Office (ERCO) (erco@ait.asia) for more details. Tel: 02 524 5010. To apply visit this link: http://www.ait.ac.th/AIT/admissions/Current_Scholarships#.Uw791qVcTXG

Collage of photos submitted for the competition.

“Coming up” CULTUR A SHOW L

Professors, We need You!

Two articles created waves in the academia in February. The first by Nicholas Kristof, in the Times, titled “Professors, We Need You!” posited that there are “fewer public intellectuals on American university campuses today than a generation ago.” Immediately a hashtag #engagedacademics sprung up to debate this issue. This was followed by Joshua Rothman’s piece in the New Yorker which asked “Why is academic writing so academic?” Read both articles at these links: http://goo.gl/nEjwqt http://goo.gl/wnX7JR