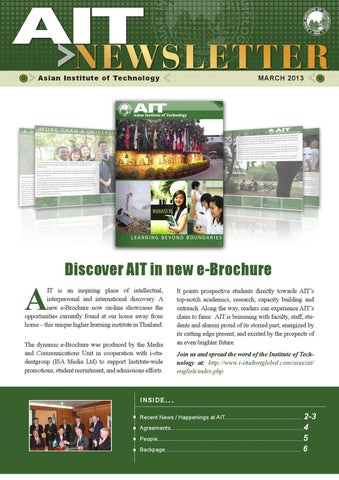 IT is an inspiring place of intellectual, interpersonal and international discovery. A new e-Brochure now on-line showcases the opportunities currently found at our home away from home – this unique higher learning institute in Thailand. The dynamic e-Brochure was produced by the Media and Communications Unit in cooperation with i-studentgroup (ISA Media Ltd) to support Institute-wide promotions, student recruitment, and admissions efforts.

It points prospective students directly towards AIT’s top-notch academics, research, capacity building and outreach. Along the way, readers can experience AIT’s claim to fame. AIT is brimming with faculty, staff, students and alumni proud of its storied past, energized by its cutting edge present, and excited by the prospects of an even brighter future. Join us and spread the word of the Institute of Technology at: http://www.i-studentglobal.com/asia/ait/ english/index.php

According to an official communiqué released on 19 Feb-

ruary 2013 by the AIT Board of Trustees Secretariat, the appointment of Prof. Wor-

sak was made with effect from 13 February 2013. The communiqué also said: “The Board was informed that the AIT Vice President for Academic Affairs (VPAA) Professor I. M. Pandey, who is on personal leave for the major part of February 2013, was appointed by the President to serve as Acting President upon his return, starting from 4 March 2013.”

Fact Finding Committee: The Board of Trustees also appointed Members of the Fact Finding Committee. Dr. Thakur Phanit, former Ambassador of Thailand to Poland and Singapore is Chairperson of the Committee. Other members of the Committee include Mr. Panat Tasneeyanond, former Dean, School of Laws, Thammasat University; Mr. Ghofar Ismail, First Secretary, Embassy of Indonesia; Mr. Malik Muhammad Saeed Khan, AIT alumnus and former member of the Board; and Mr. Jaruwan Ruangsawasdipong, Director of Human Resources Institute, Office of Auditor General of Thailand.

AIT extends ‘Asian low-carbon society’ concept AIT’s effort to build a ‘low-carbon society’ was showcased at an ‘Experiences Sharing Workshop’ held in Bangkok on 11-12 February 2013. The project called “Action towards resource-efficient and low-carbon cities in Asia” focuses on fast-growing cities of half-a-million or less.

A new Japanese university consortium linking the University of Tokyo, Keio University and Tokyo University of Marine Science and Technology has invited AIT to join its multidisciplinary program for innovation of space applications called GSPASE. Officials representing the three-university alliance visited the campus on 21 February 2013, extending an invitation for AIT to join the university grouping as a member from outside Japan. The officials met with AIT’s acting president, and later organized a conference that assessed the needs for space and geospatial information education in Thailand.

The equipment was donated to the EEM laboratory by Mr. Prapan Ariyamethee, Managing Director, LPE. A team led by Mr. Pongprapan Ariyamethee, Business Development Manager, LPE came to AIT on 18 February 2013 to hand over the equipment. AIT’s Prof. C Visvanathan, while receiving the equipment expressed his gratitude, stating that the support demonstrates how academic research sector could work in close collaboration with industry.

The agreement focuses on joint research on algal biomass and biodiesel production, along with joint research activities in agro-residues and value addition in other biomass. Besides agreeing to submit joint project proposals, the MoA envisages exchange of students, faculty and researchers in specified research. The MoA follows a Memorandum of Understanding (MoU) that was signed between CSU and AIT in August 2012. Dr. Subin Pinyakan, Chairman of the SERD School Board, AIT, and Dr. John D. Nelson, CEO of Engineering Analytics Inc., also. attended the ceremony. The CSU delegation included Prof. Kenneth F. Reardon of department of chemical and biological engineering, and Dr. David Dandy, Head, Department of Chemical and Biological Engineering.

IDRC awards for AIT students Two AIT students, Mr. Ngo Thanh Son and Ms. Trang Bui Thi Thu have been awarded the “University of Nairobi-International Development Research Centre (IDRC) Research Grants Award.” The award is granted to strengthen the capacity of Master’s and Doctoral students in universities in Africa, Asia and Latin America to more effectively engage in research on innovative application of ICTs in addressing water-related impacts of climate change leading appropriate policy formulation. The award comprises of a cash grant of CAD $15,000 each. Mr. Ngo Thanh Son is a doctoral student who is conducting his research on “As-

sessment of Land Use change and Climate Variability on Water Resources for the Upper Ma River Basin of Viet Nam’. Mr. Son is conducting his research under the supervision of Dr. Rajendra P Shrestha of Natural Resources Management (NRM) at AIT’s School of Environment, Resources and Development (SERD). Ms. Bui, who is a Master’s student will be conducting research on ‘Water management for rice production under climate change scenarios in Quang Nam Province of Vietnam’. Ms. Bui is conducting her research under the supervision of Dr. Sangam Shrestha of Water Engineering and Management (WEM), at AIT’s School of Engineering and Technology (SET).

tion and climat change adaptation. The citation mentions how she became interested in disaster risk reduction when she was a graduate student at AIT. Ms. Kathylyn graduated with a Master’s in Gender and Development Studies (GDS) from AIT in 2008.

Ms. Kathlyn has been selected for her work in the field of disaster risk reduc-

Mr. Laszewski joined AIT in October 1986 and served until 1993. He rejoined AIT in July 1998, and asumed the Mr. Matthew Laszewski position of Director, Language Center in 2000. He is credited with developing Talkbase and Bridging programs. An American national, he will continue to be based in Bangkok.

AIT Facebook crosses 10,000 likes AIT Facebook Page crossed 10,000 likes in February 2013. AIT Page followers are almost five times the strength of its student body. Launched in July 2009, AIT was among the first institutes in the region to use the Facebook platform.

March 2013 edition of the monthly AITNewsletter

March 2013 edition of the monthly AITNewsletter