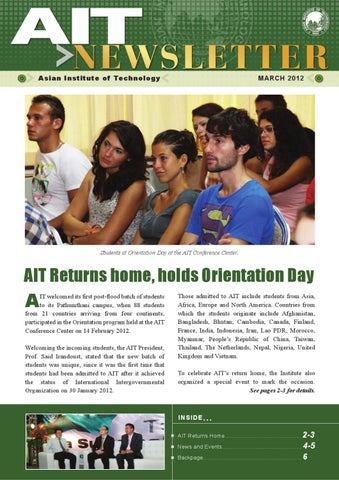 Students at Orientation Day at the AIT Conference Center.

IT welcomed its first post-flood batch of students to its Pathumthani campus, when 88 students from 21 countries arriving from four continents, participated in the Orientation program held at the AIT Conference Center on 14 February 2012.

Welcoming the incoming students, the AIT President, Prof. Said Irandoust, stated that the new batch of students was unique, since it was the first time that students had been admitted to AIT after it achieved the status of International Intergovernmental Organization on 30 January 2012.

To mark the return to its Pathumthani campus, AIT organized a panel discussion featuring Dr. Seree Supharatid of Rangsit University, and Dr. Masahiko Nagai and Dr. Sutat Weesakul of AIT. The panel discussion, which was moderated by well-known TV anchor Mr. Varin Sachdev was broadcast live on TAN television network.

to mark the return of AIT to its mother campus in Pathumthani, Prof. Irandoust said the AIT campus is being reconstructed along lines of sustainability so that it can act as a model for others to emulate. Further, the Institute seeks to emerge as a Knowledge Hub in the field of flood management. President Irandoust stated that all rebuilding, reconstruction and renovation is being conducted on the basis of principles of safety, security and sustainability. “By safety, we mean that AIT should be protected from a potential disaster, especially flood. The AIT community should be protected from risk and danger, and the buildings should be safeguarded,” the President said.

Thailand’s options for flood control as enunciated by Dr. Seree

Thailand has three options for managing and controlling floods, including creating a retention basin of three million Rais (3000 million cubic meters); creating an additional East flood bypass channel; and creating both East and West flood bypass channels in addition to the retention area. These options were postulated by eminent flood expert Dr. Seree Supratid of the Sirindhorn International Environmental Park, Climate Change and Disaster Center, Rangsit University at a discussion organized by the Asian Institute of Technology (AIT) on 24 February 2012. Dr. Seree stated that there is a “do nothing option” as well, though ideally Thailand has to decide between creating a water retention area, either alongwith or without the flood channels.

Changes needed in both hardware and software: Dr. Sutat

Flood expert Dr. Sutat Weesakul of AIT stated that for better flood management, there is a need for a change in both

hardware and software elements. The hardware change requires creation of a retention area, and building of dykes, a short cut area at the Tachin River and flood diversion methods. The software changes required need a change of flood management approach in the flood plain. He added that though floods occur once every 4-5 years in Thailand, the return period of the type of flood experienced in 2011 is approximately 100 years. He added that Thailand had experienced flood in the years 1983, 1988, 1995, 2000, 2002, 2006, 2010 and 2011.

Monitoring flood via satellite images Speaking at the event, Dr. Masahiko Nagai stated that though the flooded area in 2011 was approximateny 45,000 square kilometers compared to 33,600 in 2010, the devastation faced by people in Thailand was extremely high. He also elaborated on how AIT students produced real-time maps using satellite imagery, though the Institute itself was flooded. He elaborated on the contribution of Sentinel Asia in flood monitoring.

President Prof. Said Irandoust thanked EBARA for the gesture. “AIT is thankful to its friends, and the Institute looks forward to a better post-flood future,” the President said. Mr. Hirono remarked that the EBARA workshop in Navanakorn Industrial Promotion Zone in Pathumthani was also damaged, since it remained inundated under two meters of water for six weeks. He added that EBARA would be keen to collaborate with AIT and would seek its help when it expands its operations.

The code, which is a combination of black or colored modules arranged in a square pattern on a white background, can be scanned by a range of devices including smart phones and tablets. Unveiling the QR codes, the AIT President Prof. Said Irandoust remarked that AIT is known for technology and innovation, and this is yet another move which attests that AIT is in tune with the latest developments. “QR codes will help AIT in reaching out to upwardly mobile young audiences, and it can be a good marketing, advertising and promotion tool,” he remarked.

... And 1M from Tohoku University A delegation from Tohoku University, comprising of Prof. Hideki Harada and Prof. Tatsuo Omura handed over a donation of 1 million Yen to AIT for repair and rehabilitation of the Institute campus. The donation was received by the AIT President, Prof. Said Irandoust on 25 February 2012. Prof. Harada and Prof Omura, both of whom have a long association with AIT, expressed their sympathy at the losses suffered by AIT. They added that Tohoku University had also suffered a major loss when three of its buildings were damaged following the earthquake in Japan. “We are sure that AIT shall remerge from the disaster very soon,” Prof. Harada added.

research; and submit joint proposals for sponsored research projects to the provincial and central Government of the People’s Republic of China, as well as international agencies.

MMU, Kenya signs MOU Multimedia University (MMU) College of Kenya has signed a Memorandum of Understanding (MoU) with AIT to enhance cooperation and explore the potential of joint degree programs. The MoU was signed in the presence of H.E. Dr. Richard Titus Ekai, Ambassador, Embassy of the Republic of Kenya to Thailand, at AIT on 29 February 2012. Prof. Walter Odhiambo Oyawa, Principal of MMU signed the MoU with the AIT President, Prof. Said Irandoust. Welcoming the agreement, H.E. Dr. Ekai remarked that he is very excited that AIT is collaborating with MMU. “MMU can act as a avenue for AIT as it seeks to expand in Kenya,” the Ambassador said.

As announced by AIT President Prof. Said Irandoust at the AIT Returns Home: Towards a Sustainable Future event on February 24, AIT is now moving forward with plans for the redevelopment of its flood-impacted mother campus. According to the president, the complete transformation of the existing AIT Extension Building into an environmentally-friendly “Lecture Theater complex” is to be the initial and signature part of this vision for a green and sustainable AIT. (See architect’s rendering above). Initial plans call for refurbishing the existing offices and rooms of the two-storey building into a series of state-of-the-art lecture halls and class rooms. According to architect Weerawudht Otrakul, the Lecture Theater will adhere to the latest criteria for LEED, or Leadership in Energy and Environmental Design, in terms of implementing practical and measurable green building design, construction, operations and maintenance solutions.

Symbolizing AIT’s international connectivity, an intricate diamondlike lattice will adorn the façade as a highly visual representation of the world’s continents, and engulf entrants with sunlight and interesting shadows. The AIT Lecture Theater is expected to be completed by mid to late 2012.

New “AIT Research Strategy 2012-2016” will change AIT, VP Research assures “AIT must change,” Prof. Sudip Rakshit told an audience last week as he publically unveiled the brand new AIT Research Strategy 2012-2016. Speaking at the “AIT Returns Home: Towards a Sustainable Future” event on 24 February, the AIT Vice President for Research introduced the document as a “roadmap for the direction of research at AIT for the next five years.” The strategy aims to leverage the institute’s demonstrated expertise and position AIT as a leader in research themes under the broad umbrella of “Sustainable Development in Context of Climate Change,” he announced. The Reserch Strategy document can be downloaded at this link: http://www.ait.ac.th/news-and-events/2012/news/AITResearchStrategy.pdf

News You can Use If you have wondered why public opinion on issues like Climate Change wavers, ArsTechnica may have an answer. In an article published by Scott K Johnson, it says that Americans are listening to politicians, and ignoring climate scientists. Read the entire article at this link: http://arstechnica.com/science/news/2012/02/americans-listening-to-politiciansmore-than-climate-scientists.ars Adding to the scepticism was funding worth millions, according to this news from the Guardian : “Leak exposes how Heartland Institute works to undermine climate science.” Read the entire article at this link: http://www.guardian.co.uk/environment/2012/feb/15/leak-exposes-heartlandinstitute-climate