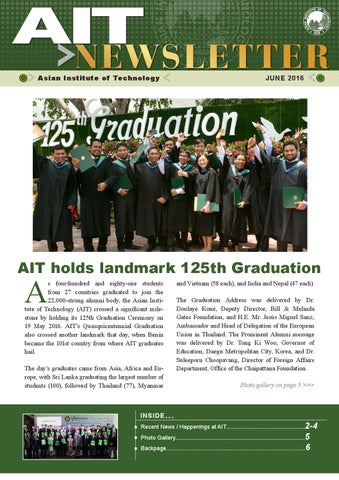 s four-hundred and eighty-one students from 27 countries graduated to join the 22,000-strong alumni body, the Asian Institute of Technology (AIT) crossed a significant milestone by holding its 125th Graduation Ceremony on 19 May 2016. AIT’s Quasquicentennial Graduation also crossed another landmark that day, when Benin became the 101st country from where AIT graduates hail. The day’s graduates came from Asia, Africa and Europe, with Sri Lanka graduating the largest number of students (100), followed by Thailand (77), Myanmar

and Vietnam (58 each), and India and Nepal (47 each). The Graduation Address was delivered by Dr. Doulaye Koné, Deputy Director, Bill & Melinda Gates Foundation, and H.E. Mr. Jesús Miguel Sanz, Ambassador and Head of Delegation of the European Union in Thailand. The Prominent Alumni message was delivered by Dr. Tong Ki Woo, Governor of Education, Daegu Metropolitan City, Korea, and Dr. Suleeporn Choopavang, Director of Foreign Affairs Department, Office of the Chaipattana Foundation. Photo gallery on page 5 >>>

Our relationship with AIT is very precious: Ambassador of France Our relationship with the Asian Institute of Technology (AIT) is very precious, and I wish to express my willingness to develop it further. Stating that AIT was doing an “amazing job,” the Ambassador of France to Thailand, H.E. Mr. Gilles Garachon said that he wished to assure AIT of cooperation from the French Government.

AIT has expanded its relationship with universities and research institutes with China with the signing of three agreements aimed at doctoral scholarships for Chinese students, faculty secondment from top universities in China, and offering professional programs for high speed railways. Led by AIT President Prof. Worsak Kanok-Nukuchai, AIT signed a Memorandum of Understanding (MoU) each with the B ​ eijing

Institute of Technology (BIT) and the China Scholarship Council (CSC); and renewed its agreement with Beijing Jiaotong University (BJTU). The agreement with BIT, which was signed on 6 May 2016 by Prof. Worsak and Prof. Zhang Wei, BIT’s Chairman of the University Council, seeks to facilitate student exchange, secondment of young faculty members from BIT to AIT, and a combined International

Summer Camp for undergraduate students. The MoU with the China Scholarship Council, signed on 7 May 2016 between Prof. Worsak and Dr. Liu Jinghui, SecretaryGeneral of CSC provides for 10 annual doctoral scholarships for Chinese students to study at AIT; while the agreement with BJTU could lead to a partnership on transportation and high speed railways.

The Conference, which was inaugurated by the UN Secretary General Ban Ki-moon on 30 May 2016 is focused on the theme “Education for Global Citizenship: Achieving the Sustainable Development Goals Together”. This is the fifth time that the DPI/NGO Conference is taking place outside United Nations Headquarters in New York.

Delegates of the Collaboration for Innovation event at AIT.

A sanitation truck that cleans all sludge, a cyclone toilet that uses gravity for cleaning, a pit that treats sludge before discharging it to the environment, and a solar toilet were the four innovative products unveiled by AIT in Bangkok on 26 May 2016. These four technology products are the result of a five-year project titled “Reinventing the Toilet” that was funded by the Bill & Melinda Gates Foundation. Announcing their official launch, AIT experts said these sanitation products would help Thailand take the lead in improving the quality of life in both Asia and Africa, where they will be implemented. Dr. Thammarat Koottatep, the Principal Investigator of the project said: “The idea is to have an on-site treatment that is decentralized so that we can avoid transportation of fecal matter over long distances.” Dr. Thammarat said that these products will help establish Thailand as a leader in water and sanitation technologies in the entire ASEAN region and beyond. Dr. Doulay Koné, Deputy Director, Water, Sanitation and Hygiene (WASH) at the Bill & Melinda Gates Foundation remarked: “AIT has done an excellent job, and now that the technology is ready, we are eagerly looking forward towards its implementation in both Asia and Africa.”

Dr. Avishek Datta and Dr. Masahiko Nagai have been selected for the 2015 AIT Teaching Award. While Dr. Datta belongs to Agricultural Systems Engineering of School of Environment, Resources and Development, Dr. Masahiko Nagai belongs to Remote Sensing and Geographical Information Systems of School of Engineering and Technology (SET). Dr. Datta has been selected in the category of 15 or less students, while Dr. Nagai has been selected in the category of over 15 students. The announcement of the award was made by AIT’s Vice President for Academic Affairs, Prof. Sivanappan Kumar.

Dr. Mongkol Ekpanyapon has been promoted to the rank of Associate Professor in the School of Engineering and Technology (SET). This follows the recommendations of the Faculty Evaluation Panel (FEP) and the SET Promotions Committee.

The newly launched magazine of the AIT Students’ Union titled “In Harmony” celebrates the diversity of the institute and touches issues related to life in campus which at the same time positioning AIT as a global microcosm. Released prior to AIT’s 125th Graduation, the magazine explores life in AIT as well as the countries of origin of many AIT students. Follow AIT at • Facebook • YouTube • Twitter • Google+ • LinkedIn • Pinterest