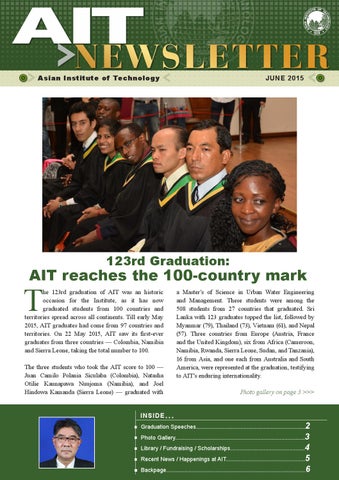 he 123rd graduation of AIT was an historic occasion for the Institute, as it has now graduated students from 100 countries and territories spread across all continents. Till early May 2015, AIT graduates had come from 97 countries and territories. On 22 May 2015, AIT saw its first-ever graduates from three countries — Colombia, Namibia and Sierra Leone, taking the total number to 100. The three students who took the AIT score to 100 — Juan Camilo Polania Siculaba (Colombia), Natasha Otilie Kaunapawa Nuujoma (Namibia), and Joel Hindowa Kamanda (Sierra Leone) — graduated with

a Master’s of Science in Urban Water Engineering and Management. These students were among the 508 students from 27 countries that graduated. Sri Lanka with 123 graduates topped the list, followed by Myanmar (79), Thailand (73), Vietnam (61), and Nepal (57). Three countries from Europe (Austria, France and the United Kingdom), six from Africa (Cameroon, Namibia, Rwanda, Sierra Leone, Sudan, and Tanzania), 16 from Asia, and one each from Australia and South America, were represented at the graduation, testifying to AIT’s enduring internationality. Photo gallery on page 3 >>>

Prof. Worsak Kanok-Nukulchai “Graduation day is a day to look back and forward,” AIT President Worsak KanokNukulchai told the 123rd Graduating class. In his message to the graduands, President Worsak told the class that their graduation is not an end but just the start of their overall life journey. “Always be proud to be a part of our world-class institute,” he said, listing some of the major initiatives that are pushing the Institute forward, such as its successful Library Modernization Campaign and entry into the international university rankings tables for the first time in its history. AIT has been ranked for the first time in its history, and scored no. 1 in the world for “international orientation,” according to the EU-supported U-Multirank 2015. The graduates should also feel proud that AIT has responded to its partner country Nepal, which has been devastated by the recent earthquake.

Pote Nakittakurn (Lee Pit Teong) In an inspiring speech, Mr. Lee explained his life as a real-life ‘rags to riches’ tale of what is possible if one is patient, perseveres, and has passion. The amiable and hugely successful entrepreneur, restaurateur, and international education technologist – who revealed that he arrived “without one cent” in Thailand from Myanmar on December 18, 1971 – offered specific ‘life pointers’ for each graduate to “live well and prosper.” Urged by his Bangkok-based uncle to try his luck and apply to AIT, he did so and earned a scholarship to study for a Master’s Degree in Water Engineering. In doing so he became the first student in AIT history from Myanmar, and he studied under Dr. Subin Pinkayan, then a faculty member at AIT who is now the Chairman of the AIT Board of Trustees. “Don’t be afraid of change, as it often leads to opportunity,” he said. “As long as you conduct yourself in good spirit, you have no reason to be afraid in life.” He stressed that having integrity in one’s professional and personal life is a prerequisite to happiness. Moreover, “the 3-Ps” of patience, passion, and perseverance, are essential to achieving success in the end, he said, and as his life story has been prime example.

Colonel Yanyong Phataralaoha, D.Eng. Colonel Yanyong Phataralaoha, D.Eng. traversed his journey from his early days in the Armed Forces Academy Preparatory School to charting the course of Thai Pipe Industry, which is one of the largest PVC pipe manufacturers in the region. “The objective of a commencement address is to inspire and prepare you for the real world outside,” Col. Yanyong remarked. “Life is a mystery, an adventure,” he added, as he traced the contours of his own personal story. “Every decision you make will always lead to something big or small,” Col. Yanyong said, adding that it is only with “real determination” that individuals can move forward. Col. Yanyaong described life as “nonlinear, chaotic, unpredictable and often counterintuitive.” “Be adventurous, make each moment count, and optimize your effort,” he quipped, as he concluded his address by asking graduands to maintain a sense of duty and honor. “And when you succeed, give back,” he said. All graduation speeches are available at this link: http://goo.gl/u04d5d

Red Bull’s 10 Mil. Baht grant co-brands AIT with world’s No. 1 energy drink maker Mr. Saravoot Yoovidhya, Managing Director of T.C. Pharmaceutical Industries Co., Ltd., the owner of beverage giant ‘Red Bull’, on 7 May 2015 presented a corporate donation of 10 million Thai Baht to AIT President Prof. Worsak Kanok-Nukulchai towards the AIT Library Modernization Campaign. Mr. Saravoot said that he was proud to be associated with the project, especially in this 60th Anniversary year of HRH Princess Maha Chakri Sirindhorn, who is AIT’s Royal Alumna. Thanking the managing director for his firm’s generosity, President Worsak said: “AIT is pleased and honored to be co-branded with Red Bull in the modernization of the AIT library.” President Worsak also mentioned to Mr. Saravoot that both Red Bull and AIT have something in common as brands, as both are better known overseas than in Thailand. AIT was recently ranked number one in ‘international orientation’

among 1,200+ universities in the world with an alumni network spanning over 90 countries, and Red Bull is a global brand known worldwide, selling its products in more than 150 countries, he said.

Alumnus Dr. Yanyong Phataralaoha donates 2 million Baht for AIT Library Prominent alumnus and Graduation Speaker at AIT’s 123rd graduation, Colonel Yanyong Phataralaoha, D.Eng., has donated 2 million Baht towards the AIT Library Modernization. He handed over the donation to AIT President Prof. Worsak Kanok-Nukulchai on 22 May 2015, shortly after the AIT Graduation ceremony. This is the third donation by Dr. Yanyong to AIT. Dr. Yanyong stressed the importance of donating and giving back to society in his Graduation Speech. “Have a sense of duty, honor, and doing the right thing. And when you succeed, give back. You will find happiness in giving back,” he said.

Ministry of Education, Youth and Sports officials from Cambodia at AIT.

Newly appointed Director of Japan Aerospace Exploration Agency (JAXA), Bangkok, Mr. Masanobu Tsuji has commended AIT graduates, stating that the Asian Institute of Technology provides good quality education and that its graduates are highly capable. Mr. Tsuji made his remarks during a visit to AIT on 5 May 2015. “I interacted with various scientists while working on the deployment of satellites in ASEAN, and to my surprise all of them were AIT graduates,” Ms. Tsuji said. “AIT provides very good education and its graduates are highly capable,” he said during his interaction with AIT President Prof. Worsak Kanok-Nukulchai. He also expressed happiness at the partnership of JAXA with AIT, reiterating that this cooperation was extremely beneficial to the Asia-Pacific region.

Ten officials from Cambodia’s Ministry of Education, Youth and Sport, visited AIT on 14 May 2015 to learn about the institute’s curriculum development process. The Ministry officials sought information on the process of formulation of curriculum, academic programs and accreditation. Curious to expand the range of their international offerings, the delegates were eager to know about AIT’s multicultural and international outlook. The team’s visit was coordinated by Dr. Nawasit Rakbamrung, Lecturer, Department of Chemistry, Burapha University. The Cambodian delegation was visiting AIT as a part of their learning sessions organized by the Thai International Cooperation Agency (TIGA) and Ministry of Higher Education, Thailand.

AIT alumnus appointed Permanent Secretary, Ministry of Natural Resources and Environment AIT alumnus, Dr. Kasemsun Chinnavaso has been appointed by the Royal Thai Government Cabinet as the Permanent Secretary of the Ministry of Natural Resources and Environment (MINRE). His appointment was announced on 26 May 2015. Dr. Kasemsun graduated from AIT’s Division of Human Settlement and Development (HSD) in 1986, and obtained his Doc-

AIT Cricket Team wins Bangkok Cricket League for the third time in five years AIT Cricket Team has emerged as champions of the Bangkok Cricket League ‘A’ Division by defeating their traditional rivals Bangkok Cricket Club (BCC) in the finals played at the AIT grounds on 17 May 2015. This is AIT’s third victory in ‘A’ Division during the past five years. AIT team captain Hadi Hassan Khan, who took 20 wickets in the tournament, was also declared best bowler in the division. Shubham Agarwal, who took four wickets for AIT was declared man of the match. The tournament also saw remarkable performances by AIT cricketers. Janitha Yasavi was top scorer for AIT with 284 runs scored at an average of 94.67, while Hadi was the leading wicket taker in the division with 20 wickets. Shubham, with 261 runs and 13 wickets, won five man of the match titles to emerge as an outstanding all-rounder this season. Other top tournament all-rounders included Muhammad Shafiq with 275 runs and 9 wickets, and Darshana with 191 runs and 13 wickets.

AIT Cricket Ground to host International Matches The AIT Cricket Ground will be hosting the International Cricket Council (ICC) Women’s World Twenty20 Qualifier 2015 matches. Thailand is the event host for the matches to be played from 28 November -5 December 2015. The 20 matches will be equally shared between the Thailand Cricket Ground (TCG) and AIT.“This event will provide an opportunity to the Cricket Association of Thailand (CAT) to promote and market the game in its territory, an opportunity which will highlight the truly global appeal of the women’s game,” said Clare Connor, the ICC women’s committee chair and former England captain. Read more at this link: http://goo.gl/EuQnaHA

June 2015 edition of the monthly newsletter of the Asian Institute of Technology (AIT).

June 2015 edition of the monthly newsletter of the Asian Institute of Technology (AIT).