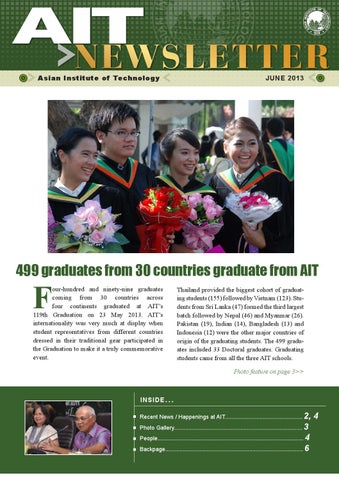 499 graduates from 30 countries graduate from AIT

our-hundred and ninety-nine graduates coming from 30 countries across four continents graduated at AITâ&#x20AC;&#x2122;s 119th Graduation on 23 May 2013. AITâ&#x20AC;&#x2122;s internationality was very much at display when student representatives from different countries dressed in their traditional gear participated in the Graduation to make it a truly commemorative event.

Thailand provided the biggest cohort of graduating students (155) followed by Vietnam (123). Students from Sri Lanka (47) formed the third largest batch followed by Nepal (46) and Myanmar (26). Pakistan (19), Indian (14), Bangladesh (13) and Indonesia (12) were the other major countries of origin of the graduating students. The 499 graduates included 33 Doctoral graduates. Graduating students came from all the three AIT schools. Photo feature on page 3>>

Indian Minister bestowed inaugural AIT Global Citizen Award Indian Union Minister of Petroleum and Natural Gas, Hon. Dr. Veerappa Moily was bestowed the inaugural “AIT Global Citizen Award” on the occasion of AIT’s 119th Graduation. The award was bestowed on the Indian Minister by Mr. Nopadol Gunavibool, Chairman, Board of Trustees of the Asian Institute of Technology (AIT), and Deputy Permanent Secretary, Ministry of Foreign Affairs, Royal Thai Government. The AIT Global Citizen Award has been instituted to honor prominent individuals and personalities who have contributed towards the cause of internationality. Accepting the award, Dr. Moily thanked AIT for the “great gesture” stating that it reinforces his desire for fostering the spirit of global citizenship. Dr. Moily was

commended for his role played in propelling the city of Bangalore on the global map as an Information Technology hub.

AIT can be a regional hub for sanitation R&D: Bill and Melinda Gates Foundation official

A senior official from USbased Bill and Melinda Gates Foundation (BMGF) has a vision for growing its partnership with AIT. It could see the Institute become a regional hub for collaboration on sanitation technology research and development, policy development, and applications for sustainable development. Dr. Doulaye Kone, Senior Program Officer, BMGF, disclosed his idea while meeting with Acting President Prof. Worsak Kanok-Nukulchai on the front end of his two-day visit to AIT on 15-16 May 2013. Dr. Kone visited to familiarize himself with the latest work of BMGF-funded Naturally Acceptable and Technologically Sustainable (NATS), a US$ 5-million AIT project spearheaded last year by Dr. Thammarat Koottatep of AIT which aims to “reinvent the toilet”, starting in Thailand, Cambodia and Vietnam.

HM King’s, HM Queen’s and Loom Nam Khong Pijai Scholarships announced at AIT His Majesty The King’s, Her Majesty The Queen’s and Loom Nam Khong Pijai Scholarships have been announced for Master’s degree studies at AIT for the August 2013 semester. The scholarships were announced following a meeting of the AIT Acting President Prof. Worsak Kanok-Nukulchai with the Secretary-General of the Office of Higher Education Commission (CHE), Mr. Apichart Jeerawuth, Thailand. The new master’s scholarships to be offered in August 2013

intake will provide students from all countries in Asia-Pacific an opportunity to study and conduct research in AIT. See details on the back page.

AIT and Nakhon Nayok strengthen cooperation on “Smart Province” Project A team of faculty members and officials from AIT on 3 May 2013 conducted two special academic lectures at a seminar hosted by Nakhon Nayok Governor Dr. Surachai Srisarakam, along with the ViceProf. Kanchana Kanchanasut (left) and Dr. Governor Mr.Sukhawat Surachai Srisarakam. Suksawasdi. The AIT delegation was led by Prof. Kanchana Kanchanasut, Vice President for Research. At the seminar, AIT experts Dr. Vilas gave a lecture on “Planning for Sustainable Urban and Infrastructure Development” while Mr. Voravate Chonlasin lectured on “Project Management and Achievement Cycle”. Dr. Surachai Srisaracam explained why AIT was chosen as a partner for the project: “We see that AIT is at the center of ASEAN. Importantly, AIT has expert knowledge and appropriate studies, which can push Nakhon Nayok forward. These are the two dimensions of our working together.”

AIT alumnus elected to Bhutan’s Upper House An alumnus of AIT, Mr. Kamal Bahadur Gurung, has been elected as member of National Council of Bhutan. The National Council is the upper house of Bhutan’s new bicameral Parliament. Mr. Gurung was elected from Tsirang constituency in a six-cornered contest held on 23 April 2013. All candidates must run as independents, as National Council members are prohibited from being members of any political party.

Mr. Gurung, who graduated with a Master’s in Engineering (2007) from Energy field of study from AIT’s School of Environment, Resources and Development (SERD), had earlier served Tsirang as a Rural Electrification Division Manager in Bhutan Power Corporation. His candidate profile proudly mentions AIT in his CV.

Closer ties with Vietnam’s MoET a key priority for AIT Acting President Prof. Worsak Kanok-Nukulchai on May 3 and May 7, 2013 held respective meetings at the main campus with AIT faculty from Vietnam and Dr. Amrit Bart, Director, AIT-Vietnam (AIT-VN), and other Institute officials, to discuss a number of AIT-VN matters, including ways for revitalizing AIT’s important relationship with Vietnam’s Ministry of Education and Training (MoET).

Mr. Chawalit Chantararat, AIT Alumni Association (AITAA) President, visited the campus on 9 May 2013 to discuss possibilities for future collaboration. Acting President Prof. Worsak Kanok-Nukulchai invited the AITAA to join the effort to rebuild the library facility and create a signature public meeting space. The architect’s design includes an “Alumni Wing” in the library and will feature the re-located Hall of Fame. Mr. Shawn Kelly, Senior Media Specialist said AIT was keen to engage the AIT Alumni in joint activities to boost the Institute’s public image in Thailand, starting with the 119th Graduation Ceremony and a press conference planned for May 23.

AIT is studying the possibility of earmarking some AIT-VN surplus funds to offer Vietnamese nationals postgraduate level scholarships to study at AIT in Thailand for the August 2013 semester, Acting President Worsak said. AIT’s alumni base in Vietnam is very strong, and the Institute has enjoyed good relations with the host country since AIT-VN was originally founded as the AIT Center in Vietnam in 1993. At a meeting of the Management Team, Prof. Worsak emphasized AIT’s priority for strengthening its relationship with MoET and the Government of Vietnam.

Scholarships and Fellowships at AIT His Majesty the King’s Scholarships For students enrolling in any field of study offered at AIT to enhance professional training and international cooperation. Her Majesty the Queen’s Scholarships For students enrolling in any environment related field of study, to instill a consciousness of environmental resilience and awareness for the region. Loom Nam Khong Pijai The Loom Nam Khong Pijai Scholarships are granted by the Royal Thai Government in honor of HRH Princess Maha Chakri Sirindhorn. It aims to assist human resource development in six GMS countries.

vide more opportunities for students from across the region to study at AIT. A new era is approaching with the coming ASEAN Economic Community (AEC) in 2015, and AIT aims to play a key role by developing the next generation of international engineers, scientists, and managers.

June 2013 edition of the monthly newsletter of the Asian Institute of Technology (AIT), Thailand.

June 2013 edition of the monthly newsletter of the Asian Institute of Technology (AIT), Thailand.