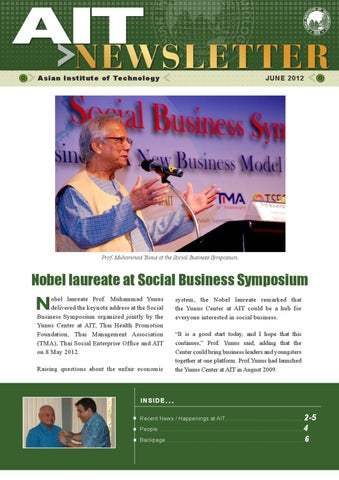 system, the Nobel laureate remarked that the Yunus Center at AIT could be a hub for everyone interested in social business. â&#x20AC;&#x153;It is a good start today, and I hope that this continues,â&#x20AC;? Prof. Yunus said, adding that the Center could bring business leaders and youngsters together at one platform. Prof.Yunus had launched the Yunus Center at AIT in August 2009.

FAO to strengthen engagement with AIT

The Food and Agriculture Organization (FAO) is interested in strengthening its commitment with AIT, particularly after its announcement of new policy directions of promoting research in academic institutions and building human resources. Stating this, Mr. Hiroyuki Konuma, Assistant Director General

and Regional Representative for Asia and the Pacific, remarked that AIT has a history of collaboration with FAO, and both should explore ways of greater engagement. Mr. Konuma stated that another important policy initiative of FAO is to build consensus on food security. As a first step, both AIT and FAO should build on existing collaboration, and involve more students in the process. Remarking that food security is also related to peace and overall security, Mr. Konuma stated that the younger generation needs to be sensitized to the importance of food and agriculture. “I have been visiting AIT earlier, and now look forward towards working very closely with AIT,” he said.

Nakornnayok Governor courts AIT for creating a smart province Governor of Thailand’s province of Nakornnayok, Dr. Surachai Srisarakham sought AIT’s help and support for transforming Nakornnayok into a “smart province,” and welcomed AIT’s presence by offering 100 rai (16 hectares) of land to AIT free of cost. Visiting AIT on 10 May 2012, the Governor stated that AIT could use Nakornnayok as a model for research applications for the benefit of the people. Nakornnayok can be an AIT base for transferring technology; establishing a department of Information and Communication Technology (ICT); creating a center; or using the province as a practical laboratory for experiments, the Governor suggested. He identified agriculture and food quality, aquaculture, ICT, disaster management, and clean en-

TSF chief visits AIT President of Télécoms Sans Frontières, Mr. Jean-François Cazanave has assured AIT of support and sought stronger ties with the Institute. In a visit to AIT on 16

ergy as key areas of interest. “We will concentrate on innovation and improving the quality of life of people,” Dr. Surachai said.

May 2012, Mr. Cazanave said TSF was very happy with the partnership with AIT, and was keen to continue its engagement. The TSF President stated that AIT has provided many volunteers to TSF, and in return these students had acquired real-life experience in disaster conditions. TSF, whose office and facilities were inundated during the October 2011 flood, also expressed its interest to return to the AIT campus. He added that TSF will be hosting a major European Commission funded training camp at AIT in 2013.

22 (out of total of 29 awardees) at a function organized on 25 May 2012. Hosting a function for Japanese Government Scholarship Recipients at AIT on 25 May 2012, the ambassador said AIT Master and Doctoral level graduates from around Asia have been playing an active role in various fields in their home countries for years. These activities have raised

The batch arrived at AIT from Lao PDR, Myanmar, Cambodia, Vietnam and Thailand to attend the Bridging Program. The capacity building program for the MRC, however, also assists the JRP selectees in the professional skills and competencies they need to work. Designed by Mr. Tylor Burrows of AIT’s LC for client MRC, the JRP Bridging Program im-

The 9th AUA Core Members’ Meeting was hosted by AIT’s

Center of Excellence on Sustainable Development in the Context of Climate Change (SDCC) and funded by Hokkaido University.

The intersection of energy and the environment is one of the most pressing issues facing countries in the Greater Mekong Sub-region (GMS). To evaluate these challenges, AIT played host on 21 May 2012 to delegates attending the International Conference on “Energy and Environment Sector Cooperation of the GMS Countries.”

AIT alumna appointed Deputy Res Rep, UNDP, Myanmar The AIT Alumni Affairs Office reported that AIT alumna Ms. To Thi Thuy Hang, a Vietnamese national who received a Master of Science in Environmental Ms. To Thi Thuy Hang Engineering from AIT in 1991, has been appointed as Deputy Resident Representative (Operations), UNDP Myanmar. Prior to taking up her new position, Ms. Hang worked as an Operations Specialist at the Evaluation Office of the United Nations Development Programme, New York, from 2006-2012.

Sri Lankan alumni raise US $7500 for AIT Alumni from Sri Lanka have raised US $7500 as a contribution for providing books lost during the October 2011 flood. Led by Mr. Sunimal Weerasooriya, President of the Sri Lanka chapter of AIT Alumni Association (AITAA), the fun- Sri Lankan alumni handing over books to draising is to purchase text- Dr. Mathew Dailey. books for the AIT undergraduate program. A list of books that could be beneficial to undergraduate students has been provided by Dr. Mathew Dailey, Associate Professor, School of Engineering and Technology (AIT). According to Mr. Sanjeev Jayasinghe, Director, Fundraising, AIT, while the first batch of books has already been handed over, the remaining books will arrive at AIT before September 2012.The handover ceremony witnessed participation from AITAA (Sri Lanka chapter) office bearers, Mr.Palitha Gamage, Vice President and Mr. Dharmasiri Wickramatilake, Treasurer.

SU Research Poster Showcase exhibits AIT students’ work AIT is a research-focused institute brimming with students eager to present their latest work to the public. At the inaugural SU Research Poster Showcase on 29 May 2012 young AIT SU Research Poster Showcase 2012 researchers did just that, catching the eye of the AIT Community with engaging posters. In just two hours of open viewing, over 200 visitors reviewed the 20 research posters exhibited at the Korea House Building in the center of the campus. School of Engineering and Technology students displayed 14 posters while students from the School of Environment, Resources and Development displayed six. Opening and closing the event as the honored guest, Prof. I.M. Pandey, Vice President for Academic Affairs, described it as “an example of our finest students seeking to distinguish themselves.”

AIT student receives IPCC award A doctoral student of the Asian Institute of Technology (AIT), Ms. Rizwana Subhani, has received a grant from the Intergovernmental Panel on Climate Change (IPCC) for pursuing her research. She is one of the nine recipients for the term 2011-2012. A total of nine young students and researchers have been awarded the scholarship for pursuing research. Seven of them were awarded a “Prince Albert II of Monaco Foundation grant for IPCC,” within the framework of the collaboration between the IPCC Scholarship Programme and the Prince Albert II of Monaco Foundation Young Researchers Scholarships Initiative. The award follows an open call by IPCC, which received nearly 5000 applications, out of which 1027 were shortlisted. Students and young researchers are required to submit their proposal under five different themes. Rizwana is one of

the two recipients under the theme of “Adaptation and mitigation options for different sectors and assessment of socio-economic implications.”

Book by Dr. Sundar Venkatesh Dr. Sundar Venkatesh, Advisor, AIT Extension, has published a book on “Fundamental Accounting Principles.” Pubished by McGraw Hill, the book covers both financial accounting and managerial accounting. The book focusses on key concepts of accounting and their role in business. According to the publishers, it helps students to develop good decision-making by helping them analyze and apply accounting information. The contents are developed using the Conceptual-Analytical-Procedural (CAP) model that identifies learning objectives, textual materials, assignments and test items so that instructors can easily customize their courses. The book includes decision insights as opening vignettes featuring successful Asian entrepreneurs. Contents also focus on International Financial Reporting Standards (IFRS)

and IFRS-reporting companies. Financial reports of companies such as Nestle, Adidas, Puma, Apple and Palm are used as examples.

and it reports some of the major results of AIT research cooperation in Asia. AIT members from air quality research group serve as the first authors and co-authors of 11 out of 16 chapters. Prof. Oanh is the editor of the book. According to Prof.Oanh, this publicaion presents an integrated air quality management methodology that employs technical and policy tools to achieve air quality goals. It includes technical information and policy recommendations based on the outcomes of several multiyear air quality research programs coordinated by AIT.

AITIS Food and Fun Fair brings campus together The “Fun and Food Fair” organized by the AIT International School (AITIS) saw the entire campus come together on May 25 for a day of festivities. The event showcased a lively group dance by 100 students from the AITIS. Stalls from seven countries (India, Indonesia, Nepal, Pakistan, Philippines, Sri Lanka, and Thailand), besides AIT vendors, were set up and donated by parents and friends of AITIS. A lucky draw was held, with the first prize of a return air ticket, Bangkok – Colombo – Bangkok and a two-night, three-day stay at Hotel Catamaran Negambo, Colombo, sponsored by Sri Lankan Airlines and LSR Lanka Sportreizen, respectively. According to Mr. Ashish Sitoula, Parent Teacher Association (PTA) Chair, the proceeds from

the fair, totaling 150,000 THB will be utilized to replace the academic and extra-curricular equipment that was lost during the flood.

Technology in Education: The ‘cloud’ ate their homework

There was a time when a student used to complain that the school assignments were inaccessible since the computer had broken down. Today what could be the excuse? Maybe someone would say that the “cloud” ate the assignment. As this report in the Vancouver Sun reveals that at Notre Dame, Chromebook is keeping the storage and applicable in the “cloud.” Read more at this link http://tiny.cc/nsdaew Cloud based education services are clearly on the rise, with Internet2, now offering cloud-based sercice from 16 technology vendors. Read more in Wired at http://www.wired.com/cloudline/2012/04/internet2/.

June 2012 edition of the monthly newsletter of the Asian Institute of Technology (AIT).

June 2012 edition of the monthly newsletter of the Asian Institute of Technology (AIT).