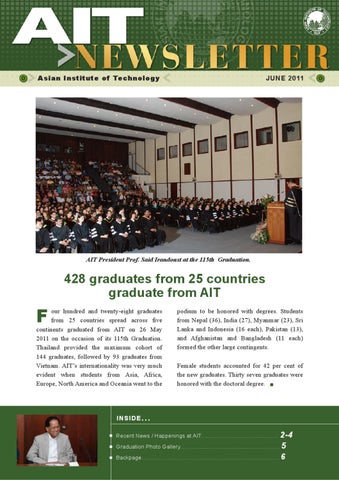 428 graduates from 25 countries graduate from AIT

our hundred and twenty-eight graduates from 25 countries spread across five continents graduated from AIT on 26 May 2011 on the occasion of its 115th Graduation. Thailand provided the maximum cohort of 144 graduates, followed by 93 graduates from Vietnam. AITâ&#x20AC;&#x2122;s internationality was very much evident when students from Asia, Africa, Europe, North America and Oceania went to the

podium to be honored with degrees. Students from Nepal (36), India (27), Myanmar (23), Sri Lanka and Indonesia (16 each), Pakistan (13), and Afghanistan and Bangladesh (11 each) formed the other large contingents. Female students accounted for 42 per cent of the new graduates. Thirty seven graduates were honored with the doctoral degree.

Assam’s Chief Minister visits AIT The Chief Minister of the Indian state of Assam, H.E. Mr. Tarun Gogoi expressed interest in collaborating with AIT to address a number of priority concerns for his state, particularly in the areas of education and sustainable socioeconomic development. High on the state gov-

ernment’s agenda is improving the professional skills of its citizens through capacity building training programs. He made these comments on 3 May 2011 while leading a high-ranking delegation to AIT to explore possibilities for partnership with the Institute. The chief minister was accompanied on the visit by H.E. Mr. Pisan Manawapan, Thailand’s newly appointed Ambassador to India. Ambassador Manawapan officially assumed his diplomatic post in New Delhi on 22 March 2011. The chief minister was welcomed by Prof. Said Irandoust, President, AIT; Prof. Sudip Rakshit, Vice President for Research; Prof. Joydeep Dutta, Vice President for Academic Affairs, and a large group of senior administration officials and faculty members.

Ambassador plays host to Japanese scholarship recipients Ambassador of Japan, H.E. Mr. Seiji Kojima felicitated seven AIT Japanese scholarship recipients at a dinner hosted at his residence to celebrate their graduation on 19 May 2011. H.E. Mr. Kojima congratulated the graduating students, and highlighted the importance of AIT as a development partner in promoting sustainable development in the region through higher education.

H.E. Mr. Kojima thanked AIT and its contribution to the Government of Japan towards reconstruction activities in the affected areas of the March 2011 earthquake and tsunami disaster. H.E. Mr. Seiji Kojima

Tropical Production and Processing Systems (PTPPS), CIRAD said the Centre was keen to identify areas of common interest and new fields of collaboration. Dr. Habib delved on the range of activities organized at his department, stating that PTPPS concentrates of production systems and processing, particularly in agricultural and plantation forestry. “We cover almost all tropical area production systems,” he added. Welcoming him to AIT, Prof. Joydeep Dutta, Vice President for Academic Affairs, spoke about the long association of CIRAD and AIT.

a similar training program for medical doctors from Sudan.

AIT and CSR Asia launch new Professional Master’s Degree in CSR AIT and CSR Asia on May 19 jointly announced the launch of a new, flexible executive-style Professional Master’s Degree program in Corporate Social Responsibility (MCSR). The eight-module program is designed by CSR Asia and will be delivered in partnership with AIT through its School of Management (SOM) and the CSR Asia Center at AIT, which is a joint-venture partnership between AIT and CSR Asia. Prof. Richard Welford, Chairman, CSR Asia, and adjunct professor at AIT’s School of Management, leads the new MCSR. “We are pleased to offer this innovative program. It will provide people

with comprehensive skills sets to deliver meaningful CSR programs in the corporate sector and beyond,” Prof. Welford said.

DPRK senior government officials train at AIT Ten senior officials from the Democratic People’s Republic of Korea (DPRK) participated in a highly specialized four-week training program on integrated watershed management and reforestation at AIT. The training course from 16 May to 10 June on Integrated Watershed Management (IWSM) and Reforestation is part of the project “Promoting Regional and Economic Cooperation in North-East Asia with particular focus on the Democratic DPRK officials at AIT. People’s Republic of Korea (DPRK)” implemented by United Nations Economic and Social Commission for Asia and the Pacific (UNESCAP). Delivering the opening remarks for the course on 16 May 2011, Prof. Said Irandoust, President, AIT, welcomed the participants to the AIT campus and said that they were all now a part of the AIT family . The course, conducted largely by AIT faculty and implemented by UNESCAP, has been spearheaded Dr. Mukand Singh Babel, Coordinator, Water Engineering and Management (WEM) Field of Study, School of Engineering and Technology (SET).

A major new global initiative, IPLA, launched by the United Nations Commission on Sustainable Development (UNCSD) to aid local governments in managing growing waste problems, was announced at UN-Headquarters in New York on 13 May 2010. The Global Secretariat of International Partnership for Expanding Waste Management Services of Local Authorities (IPLA) will be hosted by AIT.

“The Asian Institute of Technology is pleased to host the Global Secretariat of IPLA,” said Prof. Said Irandoust, President of AIT. “AIT will, through active collaboration with IPLA partners, foster bridges between policy and practice across the local authorities of the world and build their capacities towards integrated solid waste management and the application of what are known as 3Rs or Reduce, Reuse, Recycle.” Prof Rakshit, VP Research, represented AIT at the official launch of the IPLA at a ceremony at UN-Headquarters in New York on 13 May 2010. Prof. Chettiyappan Visvanathan of Environmental Engineering and Management (EEM) is leading the initiative on behalf of AIT.

Volunteers and team members of Télécoms Sans Frontière (TSF) were honored at a special event organized by AIT. Chairman of the AIT Board of Trustees, and Former Foreign Minister of Thailand, H.E. Dr. Tej Bunnag hosted a luncheon for AIT’s volunteers to TSF and other TSF team members on 19

AIT has joined the UN-Habitat Partnership University (HPU) Initiative. Prof. Sudip Kumar Rakshit, Vice President for Research, who participated in the first global meeting of HPUI held in London, UK, from the 16-18 May, 2011 has been nominated to represent the Asia-Pacific region in the HPUI’s steering committee.

PEOPLE Dr. Kiyoshi Honda, Associate Professor in Remote Sensing and Geographical Information Systems at the School of Engineering and Technology (SET) has left AIT effective from 31 May 2011. He served AIT since 1995.

Dr. Shabbir H. Gheewala, an AIT alumnus, has recently been appointed Professor at King Mongkut’s University of Technology Thonburi (KMUTT), Thailand. Dr. Shabbir completed his Master’s and Doctorate under the Environmental Engineering Management (EEM) Program in AIT in 1995 and 2001 respectively, under the supervision of Prof. Ajit Padmakar Annachhatre.

“Virtual dentist” sweeps Video Research awards Cutting edge research and cinematography coalesced at the V.Research Film Fest, AIT’s annual research focused video competition, as 11 teams vied for top honors. Enthusiastic students keen to showcase their research employed a wide variety of tools to produce informative, creative and entertaining videos, which kept the audience spellbound for over two hours at the AIT auditorium on 19 May 2011. Mr. Phattanapon Rhienmora swept the awards with his video “Better Dentists through Virtual Reality.” His video emerged a clear winner, grabMr. Phattanapon Rhienmora receiving the Grand Prize from bing the Grand Prize as well as the prizes for proProf. Joydeep Dutta. ducing a video “most likely to be shown on television,” and the “most creative and entertaining video.” The “Popular Choice” award went to the video “Pure water under the Sun” produced by Mr. Sunandan Baruah, a graduating Ph.D. student from Nanotechnology, who also won the award for “Best in Communicating Science.” The President’s Choice award went to Mr. Hitesh Nidhi Sharma for “The Origami Design”who won the “Best Soundtrack” and “Best Performance in a Video” award.

Across More Classes, Videos Make the Grade In some science and writing courses, final papers are giving way to multimedia writes Jeffrey R. Young in the Chronicle. Film students aren’t the only ones producing videos for homework these days. Professors teaching courses in writing, geology, forensics, sociology, anthropology, foreign languages, and many other disciplines now assign video projects, pushing students to make arguments formatted for the YouTube age. Read more at this link http://chronicle.com/article/Across-More-Classes-Videos/127422/

June 2011 edition of the monthly Newsletter of the Asian Institute of Technology (AIT). For feedback, contact Media and Communications Unit...

June 2011 edition of the monthly Newsletter of the Asian Institute of Technology (AIT). For feedback, contact Media and Communications Unit...