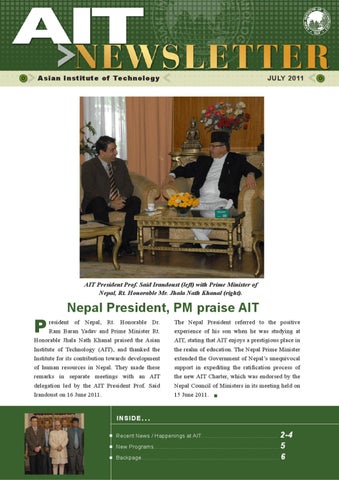 resident of Nepal, Rt. Honorable Dr. Ram Baran Yadav and Prime Minister Rt. Honorable Jhala Nath Khanal praised the Asian Institute of Technology (AIT), and thanked the Institute for its contribution towards development of human resources in Nepal. They made these remarks in separate meetings with an AIT delegation led by the AIT President Prof. Said Irandoust on 16 June 2011.

The Nepal President referred to the positive experience of his son when he was studying at AIT, stating that AIT enjoys a prestigious place in the realm of education. The Nepal Prime Minister extended the Government of Nepalâ&#x20AC;&#x2122;s unequivocal support in expediting the ratification process of the new AIT Charter, which was endorsed by the Nepal Council of Ministers in its meeting held on 15 June 2011.

UNESCO delegation for partnership on sustainability issues UNESCO is working on mainstreaming the issue of climate change in curricula and is keen to develop sustainable development indicators. UNESCO Bangkok is also keen on policy initiatives, and it wishes to tap the expertise available at AIT. This was the sentiment expressed by a delegation of UNESCO which visited AIT on 27 June 2011. The delegation included Ms. Vimonmas Pam Vachatimanont and Ms Katie Vanhala of Education for Sustainable Development Unit (ESD); Ms. Lay-Cheng Tan and Ms. Jiaming Ju of Asia-Pacific Programme of Educational Innovation for Development (APEID).

PACT for pact with AIT

PACT, an American-based NGO, is open to developing a strategic partnership with AIT. This message was delivered by Mr. Kurt MacLeod, Associate Vice President for Asia/Eurasia, PACT, during an exploratory meeting with AIT officials on 21 June 2011. Mr. Macleod led a delegation to AIT that included Mr. Siddhi Aryal, Deputy Chief of Party, GMR Program, Pact Thailand, and Ms. Jarusri Jiravisitkul, Corporate Community Engagement Coordinator, Pact Thailand. “AIT is a leader many fields in the region,” Mr. Macleod told AIT officials, outlining his organization’s interest in exploring a partnership. He described how AIT’s name and its mission were mentioned at a forum, encouraging PACT to visit AIT and look for a long-term partnership.

UNISDR for AIT’s participation in Global Assessment Report The United Nations International Strategy for Disaster Reduction (UNISDR) is keen to associate with AIT in the prepaMr. Jerry Velasques ration of the Global Assessment Report (GAR). This was stated by Mr. Jerry Velasques, Senior Regional Coordinator, UNISDR for Asia and Pacific, at a meeting held at AIT on 3 June 2011. Interacting with the AIT President and other senior faculty and staff members, Mr. Velasquez stated that the two had collaborated during the Asia Pacific Disaster Report in 2010. “We know the strengths of AIT and we are keen to learn more about other possibilities of collaboration particularly in undertaking analytical work,” he said. Mr. Velasquez was leading a five member UNISDR team comprising of Ms. Hang Thi Thanh Pham, Mr. Sujit Mohanty, Ms. Madhavi Malalgoda Ariyabandu, and Mr. Abhilash Panda (Regional Programme Officers).

“Asian Prefab Technology for Budget Housing” seminar for Africa A seminar “Asian Prefab Technology for Budget Housing” hosted by AIT on 16-17 June 2011 brought together African diplomats, academics, engineers, and businessmen to network on how Asian construction technology and expertise can address Africa’s large need for affordable housing. Organized by the Asiafrica Foundation with the support of AIT Extension, and sponsored by Thai Design Consortium (TDC), the seminar attracted the participation of senior executives of International Dome House (IDH), Japan, as well as representatives of Thai firms Thai Design Consortium, Thai Center of Standard Engineering, Shera, and the Habitech Center of AIT. According to Asiafrica Foundation President and

Asia Pacific Water Forum (APWF) held its pre-launch workshop of the launch of the “Regional Water Knowledge Hub for Groundwater Management” at AIT on 1 June 2011. Speaking on the occasion, Ms. Yatsuka Kata-

oka of the Institute for Global Environment Strategies (IGES), stated that the APWF knowledge hub is a major initiative of knowledge sharing and capacity development. Ms. Kataoka, who is the Coordinator of Knowledge

Hub for Groundwater Management, IGES, said they had chosen AIT as its venue for the pre-launch workshop since the Institute is known for its research and education in Asia and beyond. In his welcome remarks Prof. Said Irandoust, President, Asian Institute of Technology (AIT) thanked AIT’s partners for selecting AIT as a venue for its pre-launch workshop. Prominent participants included Mr. Héctor Garduňo, formerly of Groundwater Management Advisory Team (GWMATE); Dr. Neno Kukuric, Director, International Groundwater Resources Assessment Centre (IGRAC); and Dr. Sangam Shrestha of the Water Engineering and Management (WEM) field of study at AIT.

ADB-JSP to continue scholarships at AIT

strengthen its interaction with its alumni. This was stated by Mr. Kazuo Kojima, Senior Financing Partnerships Specialist, Office of Cofinancing Operations, ADB, at a meeting at AIT on 27 June 2011. He also met recipients of the ADB-JSP scholarships.

AIT participates in Second Social Business Day AIT participated in the second annual Social Business Day events held on 28 June 2011 at Dhaka, Bangladesh. The theme for this year was “Achieving the Millennium Development Goals through Social Business”. Dr. Riaz Khan, Director, Yunus Center at AIT, was a panelist during the morning session where he spoke of using social business to achieve the Millennium Development Goals (MDGs). Prof. Muhammad Yunus (second from right) along with the AIT delegation

AIT alumna Ms. Binda Pandey has been elected as Deputy Member of the Governing Body of the International Labour Organization (ILO), a United Nations specialized agency. Her election took place at the 100th Session of the International Ms. Binda Pandey Labour Conference held from 1-17 June 2011 in Geneva, Switzerland. She graduated from AIT’s Gender and Development Studies (GDS) in 2002.

a multimedia seminar titled “Lessons from the Recent Catastrophic Earthquake and Tsunami in East Japan” on 1 June 2011.

AIT and Rangsit University (RSU) have joined forces to offer a new Unified International BachelorMaster Degree program in engineering that enables students in Thailand to earn both an undergraduate and graduate degree in five years. The English-only Unified Program allows students to earn a Bachelor’s in engineering from RSU, and then further their graduate-level engineering studies at AIT. RSU will initially offer a Bachelor of Engineering (B.Eng.) in Civil Engineering, Electrical Engineering and Computing Engineering. The Memorandum of Agreement (MoA) between AIT and RSU was signed on 2 June 2011.

Unified Bachelor-Master program launched in India A Unified Bachelor-Master-Program (UBMP) in the Agribusiness Management (ABM) was formally launched on 13 June 2011 at the Sam Higginbottom Institute of Agriculture, Technology and Sciences (SHIATS), Allahabad, India. The inaugural ceremony was attended by Prof. S. B. Lal, Pro Vice Chancellor, SHIATS, and Dr. Weerakorn Ongsakul, Dean, AIT’s School of Environment, Resources and Development (SERD). Students spend their first four years at SHIATS, and they move to AIT in the fifth year to complete the

AIT delegation at the SHIATS Campus.

AIT and NEF-CCN Colleges to offer joint educational programs AIT and Nepal Education Foundation – Consortium of Colleges, Nepal (NEF-CCN) will jointly offer a two-stage Master’s Programs in Business Administration, Energy Business Management, and in Energy and Environment, as well as two-stage Bachelor Programs in ICT, and Civil and Infrastructure Engineering.

This follows the signing of three Memorandums of Agreement (MoAs) by Prof Said Irandoust, President, AIT and Prof. Sriram Bhagut Mathe, Chairperson of NEF-CCN on 15 June 2011 at a function organized in Kathmandu, Nepal. The first year of the two-year Mas-

AIT wins Bangkok Cricket League The AIT cricket team won the Bangkok Cricket League season 2010-11 (A1 division) after a gap of four years. The AIT team defeated the Bangkok 11 Cricket Club with a margin of 21 runs. Mr. Syed Faisal Bukhari, a doctoral student at Computer Science and Information Management (CSIM) was declared Man of the Match. According to Mr. Hadi Hassan Khan, captain of the AIT Cricket Team, the team is unique as it has players from Pakistan, India and Bangladesh forget their subcontinental rivalries and play as a cohesive AIT team.

The death of email? A recent article in the Economic Times termed it the midlife crisis of email. Email is 40 years old and as email usage starts declining, many are predicting the death of email. “In its 40-year-tenure as a form of communication, email has run its course from the domain of nerdy geeks to one of the most common ways to keep in touch,” says the Economic Times http://articles.economictimes.indiatimes.com/2011-06-21/news/29683562_1_ email-service-yahoo-mail-tim-berners-lee Other reports on email however do not talk about a midlife crisis, but about the death of email. Slate wrote about it in 2007 (http://www.slate.com/id/2177969), while Wired debated in 2009 where email was dying or here to stay (http://www. wired.com/epicenter/2009/10/wired-o-nomics-is-e-mail-dead-dying-or-here-tostay/). For more reading you can also check the Wall Street Journal article on “Why email does not rule.”(http://online.wsj.com/article/SB1000142405297020380390457443 1151489408372.html) or the 2009 prediction of Facebook COO Sheryl Sandberg at this link http://www.youtube.com/watch?v=Gm8NdNy4wOM

July 2011 edition of the monthly Newsletter of the Asian Institute of Technology (AIT).

July 2011 edition of the monthly Newsletter of the Asian Institute of Technology (AIT).