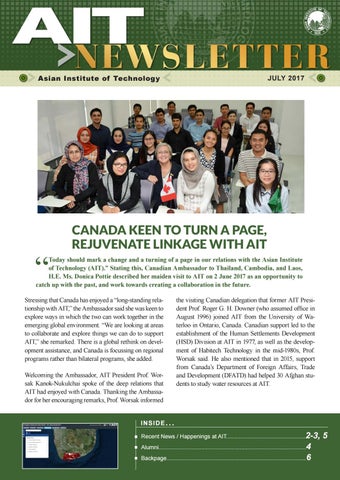 Canada keen to turn a page, rejuvenate linkage with AIT

Today should mark a change and a turning of a page in our relations with the Asian Institute of Technology (AIT).” Stating this, Canadian Ambassador to Thailand, Cambodia, and Laos, H.E. Ms. Donica Pottie described her maiden visit to AIT on 2 June 2017 as an opportunity to catch up with the past, and work towards creating a collaboration in the future.

Stressing that Canada has enjoyed a “long-standing relationship with AIT,” the Ambassador said she was keen to explore ways in which the two can work together in the emerging global environment. “We are looking at areas to collaborate and explore things we can do to support AIT,” she remarked. There is a global rethink on development assistance, and Canada is focussing on regional programs rather than bilateral programs, she added. Welcoming the Ambassador, AIT President Prof. Worsak Kanok-Nukulchai spoke of the deep relations that AIT had enjoyed with Canada. Thanking the Ambassador for her encouraging remarks, Prof. Worsak informed

the visiting Canadian delegation that former AIT President Prof. Roger G. H. Downer (who assumed office in August 1996) joined AIT from the University of Waterloo in Ontario, Canada. Canadian support led to the establishment of the Human Settlements Development (HSD) Division at AIT in 1977, as well as the development of Habitech Technology in the mid-1980s, Prof. Worsak said. He also mentioned that in 2015, support from Canada’s Department of Foreign Affairs, Trade and Development (DFATD) had helped 30 Afghan students to study water resources at AIT.

AIT teams up with TCELS on IP management AIT has partnered with the Thailand Center of Excellence for Life Sciences (TCELS) for technology transfer and intellectual property management. A Memorandum of Understanding (MoU) was signed by TCELS and AIT on 13 June 2017 by the CEO of TCELS, Dr. Nares Damrongchai, and AIT President, Prof. Worsak Kanok-Nukulchai. Addressing the gathering, Dr. Nares stated that the partnership with AIT marks the beginning of a relationship and that TCELS hopes to work with AIT on a long-term basis. “We will partner with AIT on communication and licensing, and work closely with researchers at AIT, providing them with linkages and ensuring that more innovative projects emerge out of Thailand,” Dr. Nares said. Dr. Nares stated that the cooperation between TCELS and AIT will include support in technology transfer, licensing and commercialization. TCELS will also help in establishing a technology transfer office, and in training AIT researchers.

From left: Dr. Nares Damrongchai, Prof. Worsak KanokNukulchai and Dr. Thammarat Koottatep interacting with the media after signing the MoU.

Prof. Worsak thanked TCELS for the initiative in providing an interface between the academia and the industry. The AIT President stated that universities and research organizations are often unable to commercialize their research work, since they tend to concentrate on basic research, and this partnership will benefit both organizations.

cants from Myanmar, Sri Lanka or the Philippines, to study either Geotechnical Engineering or Structural Engineering. This is in addition to the scholarship announced by E-JEC in 2014, which was targeted at students enrolled in either Structural Engineering or Disaster Preparedness, Mitigation and Management. Since then, one E-JEC scholarship recipient has already graduated from AIT in 2017. The new scholarship is an additional provision to the earlier Memorandum of Agreement (MoA) that was initially signed by the AIT President Prof. Worsak Kanok-Nukulchai, and E-JEC President, Mr. Yuji Kotani in September 2014.

graphs and incorporates river water levels, with data on loss and fatalities to provide an overview of the extent of the floods. While traditional disaster maps are static and are often solely based on satellite data and its interpretation, this emergency data viewer enables a more powerful and dynamic visual interpretation adding value for disaster relief and emergency responders. “Traditional maps are often restricted in their usability since they provide static information, while the combination of imagery, flood levels, and ground-level information vastly enhances the usability of this data viewer,” says Dr. Manzul Kumar Hazarika, Director (Project Operations), Geoinformatics Center, AIT.

Researchers at AIT have developed a community-scale framework for river health assessment to assess the health of rivers in the Mekong River Basin. The framework is being implemented in the Songkhram catchment in Northeast Thailand to assess the health of the Songkhram River. Earlier in June 2017, the AIT team handed over river health assessment equipment to five schools in the region. Supported by the CGIAR Research Program on Water, Land and Ecosystems (WLE), the project is led by Prof. Mukand S Babel, Dr. Victor R. Shinde, Dr. Oleg Shipin, Dr. Sangam Shrestha, Ms. Anyamanee Onsomkrit, and Ms. Asali Peiris of AIT. Project partners include Thai Water Partnership and the Pollution Control Department of Thailand.

AIT alumnus Kyaw Linn has been appointed Deputy Minister in the Ministry of Construction, The Republic of the Union of Myanmar. He was appointed on 5 June 2017. Prior to the ministerial appointment, Kyaw Linn was serving as Permanent Secretary and Head of Public Works in Myanmar, with the responsibility of construction and maintenance of roads, bridges, airfields, and buildings. Mr. Kyaw Linn graduated with a Professional Master’s in Construction Engineering and Infrastructure Management from AIT’s School of Engineering & Technology (SET) in 2015. He had enrolled in the Professional Master’s Program in Project Management which was delivered in Myanmar, and which is a custom-made program created for Ministry of Construction, Government of Myanmar. Mr. Kyaw Linn has been actively engaged with AIT. In April 2015, he signed a Memorandum of Agreement (MOA) on behalf of Myanmar’s Ministry of Construction for launching a oneyear Professional Master’s Degree Program on Project Management in Construction in Myanmar, with the aim to train Myanmar professionals to play a leading role in the international construction industry.

He has also been associated with the Agency for Nonconventional Energy and Rural Technology (ANERT), Thiruvananthapuram, Department of Power, Kerala, and as a scientist in Central Power Research Institute (CPRI). He completed his Ph. D. in the area of Renewable Energy (Solar Thermal) from IIT-Madras.

Fifty-one participants from 20 nationalities participated in the two-week long GeoServices-4-Sustainability (GeoS4S) international summer camp which concluded at AIT on 2 June 2017. Organized in Thailand by a consortium of 10 universities from Europe, China, and Thailand, the camp was held between 22 May-2 June 2017. Welcoming the participants, project leaders Prof. Nitin Kumar Tripathi of AIT, and Dr. Shahnawaz of the University of Salzburg stated that the camp was designed to enhance geospatial competencies of participants. Interfaculty Department of Geoinformatics – Z_GIS, University of Salzburg, Austria is the coordinating in-

30 years ago, when AIT received the USAID and the National Research Council Award

July 2017 edition of the monthly newsletter of the Asian Institute of Technology (AIT).

July 2017 edition of the monthly newsletter of the Asian Institute of Technology (AIT).