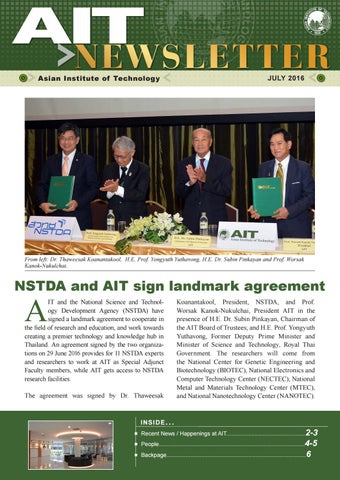 IT and the National Science and Technology Development Agency (NSTDA) have signed a landmark agreement to cooperate in the field of research and education, and work towards creating a premier technology and knowledge hub in Thailand. An agreement signed by the two organizations on 29 June 2016 provides for 11 NSTDA experts and researchers to work at AIT as Special Adjunct Faculty members, while AIT gets access to NSTDA research facilities. The agreement was signed by Dr. Thaweesak

The Ambassador expressed his interest in AIT’s campaign to renovate the Korea House, which was constructed courtesy of a USD 110,000 grant from the Korean Traders Scholarship Foundation in 1982. AIT’s partnership with Korea dates to 1975 when the Korean Government

deputed faculty members to AIT through the Ministry of Science and Technology, Korea, and later through the Korea International Cooperation Agency (KOICA).

India, AIT will offer them a Master’s program in Agriculture Business Management (MABM).

AIT’s work resonates with issues addressed by IAU: Secretary General AIT’s work is “incredibly impressive,” and it resonates with the issues that are addressed by the International Association of Universities (IAU). Stating this, Secretary-General of IAU, Ms. Eva Egron-Polak remarked that IAU is working to establish a network cluster on the theme of Sustainable Development, and it solicits AIT’s expertise and collaboration in this field. Interacting with senior AIT officials on 10 June 2016, Ms. Eva remarked that internationalization of education has changed over time. However, IAU’s principled position is that internationalization should be pegged on the pursuance of academic goals that promote academic freedom, institutional autonomy, and social responsibility.

Focussing on the core issue of governance of natural resources, the Ostrom Center for the Advanced Study of Natural Resources Governance (OCeAN) began operations with its inaugural meeting held at AIT on 14 June 2016.

for students, and secondment of faculty members and young scholars. They also elaborated on the various programs offered by CSC for Chinese students, scholars and faculty members. The meeting follows an earlier visit by an AIT team led to President Worsak Kanok-Nukulchai to China in May 2016. Dr. Zhou Gaoyu, First Secretary, Embassy of China to Thailand also accompanied the CSC delegation.

has been elected as the new President of the Southeast Asian Geotechnical Society (SEAGS). He was elected for this position at the 19th Southeast Asian Geotechnical Conference held at Kuala Lumpur, Malaysia from 31 May – 3 June 2016. It was also decided to hold the 50th year anniversary conference of SEAGS at AIT in September 2017. The event is to be hosted by Thai Geotechnical Society in collaboration with AIT. Dr. Noppadol takes over as SEAGS President from Dr. Ooi Teik Aun, and he shall serve for a three-year term from 2016-2019. Prior to taking over as President, Dr. Noppadol was serving as Honorary Secretary General of SEAGS.

Waterworks Authority of Thailand. A graduate of AIT’s Water Resources and Engineering (Master’s in 1987), he has also served as Dean of Graduate School of Engineering at Rangsit University, and Director, Sirindhorn International Environmental Park. Dr. Seree acquired considerable fame as a television analyst during the Great Bangkok Flood of 2011. He also spoke at AIT after the flood when he enunciated three options for managing and controlling floods in Bangkok, including creating a detention basin of three million Rais (3000 million cubic meters); construction of an additional East flood bypass channel; and creating both East and West flood bypass channels in addition to the detention area.

CONDOLENCE Prof. Hiroyoshi Shi- Igai AIT’s first Japanese seconded faculty member and former Vice President and Provost, Prof. Hiroyoshi Shi-Igai passed File photo: Former President Prof. away on 30 Milton E. Bender Jr. (left) welcoming May 2016. A Prof. Hiroyoshi Shi-Igal to AIT. funeral ceremony was held on 5 June 2016. An alumnus of the University of Tokyo, Prof. ShiIgai was seconded to AIT as a visiting professor of coastal engineering (1969-1971, 1973-1974). In April 1977, he was seconded for a third time, succeeding Professor Robert Banks as Vice President and Provost. From 1981-2000, Professor Shi-Igai also served as Vice Chairman of AIT’s Board of Trustees. AIT President Prof. Worsak Kanok-Nukulchai has condoled the death of Prof. Shi-Igai on behalf of the AIT community.

AIT team wins third position in ‘Go Green in the City’ contest A team of two AIT students have won the third place in the “Go Green in the City” competition organized by Schneider Electric. Termed as a global student competition for sustainable energy solutions, the competition held at Schneider’s Bangphoo Industrial Estate, saw AIT’s team comprising of Pokchat Wetchapinant and Danupol Wetchasirikul win the second runner-up position in Thailand. Presenting their proposal on “Eco districts and smart fit,” the AIT team combined a smart grid proposal with popular chat applications and games to promote the concept of reducing power consumption, particularly during peak demand.

AIT Library Soft Launch for the August 2016 Semester: A Snapshot of the Progress of the AIT Library Modernization.

Due to the late completion of undergraduate programs in some universities, AIT has extended the deadline for submission of applications for RTG Fellowships from 30 June 2016 to 23 July 2016.

Monthly newsletter of the Asian Institute of Technology (AIT).

Monthly newsletter of the Asian Institute of Technology (AIT).