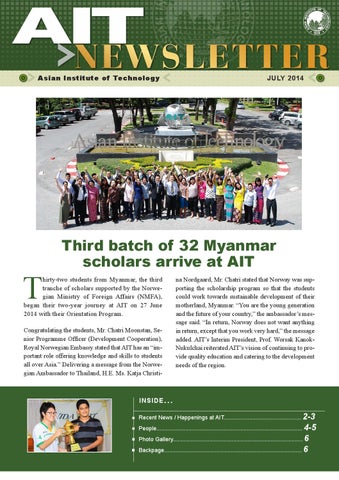 hirty-two students from Myanmar, the third tranche of scholars supported by the Norwegian Ministry of Foreign Affairs (NMFA), began their two-year journey at AIT on 27 June 2014 with their Orientation Program. Congratulating the students, Mr. Chatri Moonstan, Senior Programme Officer (Development Cooperation), Royal Norwegian Embassy stated that AIT has an “important role offering knowledge and skills to students all over Asia.” Delivering a message from the Norwegian Ambassador to Thailand, H.E. Ms. Katja Christi-

na Nordgaard, Mr. Chatri stated that Norway was supporting the scholarship program so that the students could work towards sustainable development of their motherland, Myanmar. “You are the young generation and the future of your country,” the ambassador’s message said. “In return, Norway does not want anything in return, except that you work very hard,” the message added. AIT’s Interim President, Prof. Worsak KanokNukulchai reiterated AIT’s vision of continuing to provide quality education and catering to the development needs of the region.

Pakistan Ambassador to Thailand H.E. Dr. Sohail Khan guided a senior level delegation from the Pakistan Engineering Council (PEC) on its maiden visit to AIT on 3 June 2014 for exploratory talks on broad-based collaboration, including academic accreditation.

Ambassador Khan, who is a member of the AIT Board of Trustees, said the Institute is a highly suitable higher education partner for his country. At the meeting, PEC Chairman Syed Abdul Qadar Shah informed the ambassador that the body now represents Pakistan at the Washington Accord, which is a select international accreditation agreement for professional engineering academic degrees, between the national bodies responsible for accreditation in signatory countries.

A number of leading Chinese universities aim to establish partnership arrangements with well-known higher education institutions in Southeast Asia, including AIT. That was the message Chinese diplomats and senior university administrators brought to AIT during a visit on 20 June 2014. Led by Mr. Zhou Gaoyu, First Secretary for Education, China Embassy, Thailand, a large delegation representing the ASEAN-China Centre in Beijing and high-ranking officials from The Excellent Alliance of University (E9) consortium expressed a collective desire to work with AIT. The visitors included senior representatives from Harbin Institute of Technology, Dalian University of Technology, Beijing Institute of Technology, Southeast University, Northwestern Polytechnical University, South China University of Technology, and Tianjin University. All members of The E9 rank highly in national and international university rankings.

AIT President Prof. Worsak Kanok-Nukulchai and Bangkok University President Dr. Mathana Santiwat signed a Memorandum of Understanding (MoU) on 24 June 2014 that allows for the development of joint degree programs and research activities, as well as the joint appointment of lecturers between the two universities. Also included in the MoU is a provision for joint promotional activities, such as technical meetings, international workshops, conferences, seminars, symposia and student activities.

An announcement by CBU stated that Malasri has already played a significant role during his 25-year tenure as a faculty member, department chair, program director, and a previous term as dean.

Prior to joining Gerdau, Sridhar was Krishnamoorthy Vice-President, Project Development with SENAAT, an Abu Dhabi-based industrial group, which also owns and operates Emirates Steel Industries in the UAE. Sridhar has a Bachelor’s degree in Chemical Engineering from IIT Madras, a Master’s in Energy Technology from AIT, and MBA from Monash University Australia.

AIT faculty edit book on Climate Change and Water Resources A book on “Climate Change and Water Resources,” jointly edited by Dr. Sangam Shrestha and Prof. Mukand Singh Babel, both faculty at AIT’s School of Engineering and Technology (SET), has been released by CRC Press. Released in May 2014, the book has 11 chapters divided into four sections covering various aspects of water and climate change. The forewords of the book are written by AIT’s Interim President, Prof. Worsak Kanok-Nukulchai and Prof. Kuniyoshi Takeuchi, Director, International Centre for Water Hazard and Risk Management (ICHARM) and Professor Emeritus, University of Yamanashi.

Prof. Ganesh Shivakoti has retired from AIT after serving the Institute for 16 years. He was accorded a warm farewell on 26 June 2014 in an event attended by Vice President for Academic Affairs, Prof. Sivanappan Kumar and Dean, SERD, Prof. C. Visvanathan.

A Ph.D. from Michigan State University (1991), Prof. Shivakoti worked extensively with Nobel laureate Elinor Ostrom, with whom he jointly published a book. He has been associated with AIT in various capacities since 1998, and was promoted to the rank of Professor in 2006. Prof. Shivakoti completed his Bachelor’s and Master’s from University of Udaipur, India in 1974 and 1979 respectively. He also studied for “Teacher Training in Agriculture” from National Agricultural College, Deventer, The Netherlands. Prof. Shivakoti will continue to serve AIT as Adjunct Professor to guide his Master’s and Doctoral students.

The 1954-born​ Mr. Surapol served AIT for 36 years and was instrumental in helping AIT employees with driver’s licenses, car registrations and work permits. He is survived by his immediate family, including his wife and three children.

“World has zero chance of hitting education targets” UNESCO admits it will be impossible to achieve Millennium Development Goals for universal primary education by 2015. The Guardian reports; An estimated 58 million children worldwide are not going to school, meaning that there is “no chance whatsoever” that the millennium development goal of achieving universal primary education by 2015 will be met, the UN has admitted. Read the entire story at this link: http://www.theguardian.com/global-development/2014/jun/26/ world-education-targets-schools-unesco

July 2014 edition of the monthly newsletter of the Asian Institute of Technology.

July 2014 edition of the monthly newsletter of the Asian Institute of Technology.